By all accounts, this looks to be a pretty good matchup – both North Carolina and Tennessee rely heavily on the passing game, and neither has a particularly stout defense.  Both teams have been remarkably inconsistent this year.  North Carolina managed to beat a ranked Florida State team on the road, but needed a bit of good luck in nail-biters at Duke (24-19) and at home against William and Mary (21-17).  Tennessee opened the season in poor form, with two wins (over Tenn-Martin and UAB) and six losses (to five ranked teams).  The Volunteers are on a hot streak now, however, winning their last four games with freshman quarterback Tyler Bray at the helm.  More good news for the Vols? Their offense is averaging 38 points per game during the win streak and the defense is allowing just 13 per game.  The bad news is that Tennessee beat just one bowl team during that streak and North Carolina is better than any of the teams the Vols have defeated this year.  North Carolina is averaging 267 yards per game through the air, and Tennessee is allowing 229 per game, suggesting that Carolina’s efficient quarterback T.J. Yates may have an easy time picking apart the Vols secondary.   That said, Carolina is plagued by injuries and ineligibility, something the Vols will be ready to capitalize on.  Tennessee is 5-1 ATS in its last 6 games, and North Carolina is 1-5 ATS in its last 6.  The Model likes that trend to continue with Tennessee winning as an underdog.  Prediction:  Tennessee 27 – North Carolina 24. 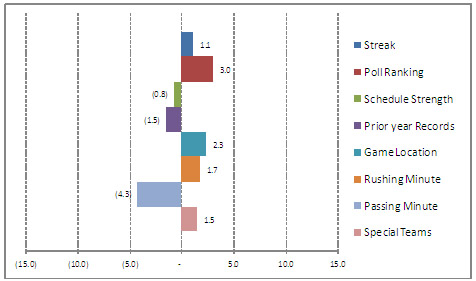 The Model is suggesting that this may be as close to a lock pick as the SEC gets this year.  Central Florida may have one of the nation’s top quarterbacks in Freshman Jeff Godfrey, who has passed for 13 touchdowns and run for another nine.  He’s ranked #1 in passing efficiency among freshman, and in many ways resembled a certain Heisman trophy winner that Georgia had problems containing last month.  Central Florida has a very balanced attack, something else Georgia has had troubles defending this year.  That said, Central Florida is still a Conference USA team, albeit a conference champion and Georgia is still a team from the mighty SEC.  Looking at the chart below, The Model suggests that is too much history to overcome.  The 13.5 points in the game location bar all come from how CUSA boys have typically fared against the men from the SEC.  UCF is an excellent team from a mediocre conference, and while the Knights are allowing only 18 points per game and 310 yards of total offense per game, they have a glaring weakness: pass defense.  Central Florida allows 208 yards per game, something Georgia Freshman quarterback (who ranks 2nd in FBS in freshman passing efficiency) will be ready to exploit.  UCF is 8-2 ATS in its last 10 games, suggesting bettors haven’t quite bought into the Knight’s season.  As 6.5-point underdogs, they will have their work cut out for them against a rebounding Georgia team that began the season 1-4 with losses to three teams ranked in the top 25 – South Carolina, Arkansas, and Mississippi State.  The Model likes the Bulldogs in this game.   Prediction:  Georgia 33 – Central Florida 21. 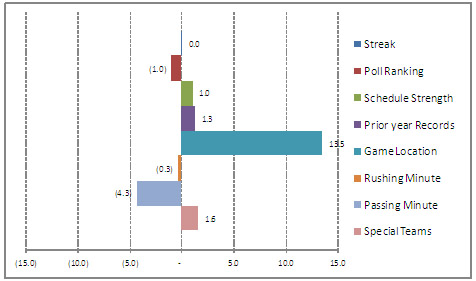 The Chick-fil-A bowl this year features a pair of 9-4 teams that each lost its conference championship game – South Carolina (56-17 loss to Auburn) and Florida State (44-33 loss to Virginia Tech).  The Gamecocks are 3-point favorites in a game that will feature two pass-heavy offenses.  South Carolina is led by quarterback Garcia, All-American wide receiver Alshon Jeffery and freshman running back Marcus Lattimore, all of which must have solid games for the Gamecocks to win.  Florida State may be without starting quarterback Christian Ponder on Friday, but his absence won’t matter much if they can’t get their ground game going against South Carolina.  South Carolina leads the SEC in rushing defense, holding teams to 103 yards per game, while Florida State averages 170 yards per game on the ground.  South Carolina holds an edge in most statistical categories in this matchup and the model likes the Gamecock defense’s odds of recovering from a humiliating 56 points allowed last time in the Georgia dome.  Each team is 3-2 ATS in its last 5 games, and while each defeated common opponent Florida by more than three touchdowns, Florida State struggled with Clemson at home, winning 16-13, while South Carolina soundly defeated the Tigers 29-7 on the road.  Look for Cocky’s defense to step up and constantly pressure whoever the Seminole’s start at quarterback into a few game-changing mistakes.    Prediction:  South Carolina 28 – Florida State 24.