According to the National Weather Service Weather Forecast Office, the climatological probability of Christmas Day snow in central Alabama on any given year is less than 5 percent. As for 2010, even our old AccuWeather confederate Frank Strait – who got us so jacked up in the first place – is starting to doubt. 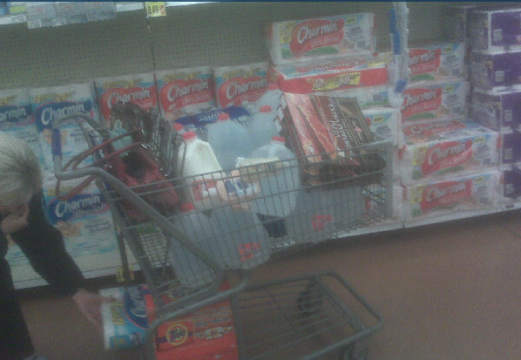 But like this woman seen yesterday at the Opelika Kroger preparing for snowpocalypse, TWER holds out hope for a white Christmas.

And if it happens, we’re as certain as certain can be (after some short but earnest internet research by own own Kenny Smith, who’s blog should be frequently checked) that it would be Auburn’s first in at least a century.

Earlier this month, a random query to the Foy Information Desk as to whether Auburn had ever had snow on December 25 received only an increasingly typical shrug… though the querier’s dentist apparently recalled a light dusting in Alex City sometime in the 60s.

Weather Underground hosts Christmas Day records for Auburn dating back to 1957. So far we’ve seen no snow (but the Christmas of ’83 was darn cold — 25/5 degrees. Brrr).

It appears — though we’re not convinced all of this data is accurate as some of it seems eerily repetitive — that Weather Underground has temperature, but no precipitation data, going back even farther. On most Christmas days from 1957 back to 1897, it more often than not just wasn’t cold enough. If that data is to be trusted it wasn’t cold enough in Auburn in 1919, either, which is when the National Weather Service seemingly recorded a white Christmas in Montgomery.

A quick search of the Glomeratas? No mention of a white Christmas.

So while the data points are likely not 100 percent accurate, it seems a safe and educated bet that there hasn’t been a white Christmas in Auburn in a long, long, long time. And that it will take another miracle in a season of miracles for tomorrow to change that.