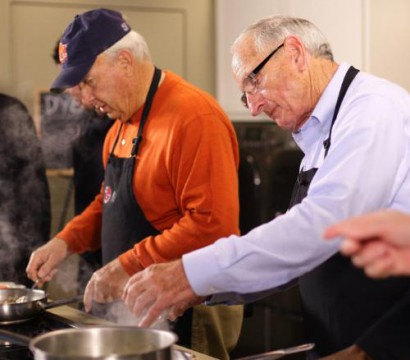 Pat Dye can cook. He might not be a professional chef, at least not yet, but he is better than Vince Dooley. “The competitive juices were flowing,” Dye said. “It always fun to compete against my old friend and rival, coach Dooley. It’s even more fun when I win.”

Neither coach knew the dish before the cook-off and each had a sous chef (from Le Cordon Bleu Culinary Institute — yes!) to act as assistant. Tim Love, of the Lonesome Dove Western Bistro, who is a University of Tennessee graduate and considered the “foremost pioneer of urban Western cuisine,” acted as the celebrity judge.

A small crowd and film crew watched as Dye, slow and steady (“I was under the impression this was a cook-off, not a race.”), bested Dooley. Barbara Dooley, Vince’s wife, was in the front alternatively getting interviewed, heckling Dye and cheering on her husband. We can only hope CBS had her mic’ed.

The Coaches Cook-off will air on CBS Sports December 16 at 8:30 p.m. (We think that’s Eastern time.)

Ingredients for Pat Dye’s Hurry Up, Harper! Shrimp ‘n’ Grits (guess you’ll have to figure out the directions by watching):