Remember that billboard on S. College with the guy that looked just like new Florida Gator head coach* Will Muschamp? They put it up right before Muschamp bolted Auburn for Texas. 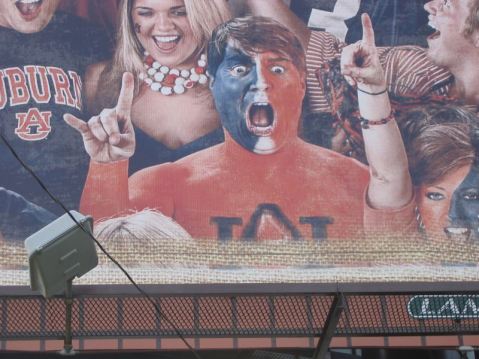 Remember when Will Muschamp was coming back from Texas to replace Tommy Tuberville as Auburn’s head coach? That was two years ago. Exactly two years ago:

We’re so glad that didn’t happen. But of course will forever be proud that the legend of ‘Boom!’ was born in orange and blue, our orange and blue (good Lord, look at that score).

*As Van noted (and as we tweeted last night to great acclaim), one-fourth of SEC head coaches are now former Auburn assistants under Tommy Tuberville. (By the way, you can now receive Mr. Plexico’s imminently tweetable musings minus a middle man – and you should receive them.)