Don’t blink, Tiger fans. You’re guaranteed to miss something incredible, some brilliancy hatched in Malzahn’s mind, some gut-check play by a refuse-to-die defense, some adrenalized explosion of pure speed. You’ll hear about it, you won’t believe it, but it’s true. The obstacles keep falling just as quickly as they step out onto the tracks, most lately, the curse of #1, the emotional trap which our Tigers never seem to avoid… until now. All that’s left is to win – all that was ever left was to win, but the Tigers have shed so much extra weight. The weight of a straggling defense. The weight of an unknowable first-season quarterback. The weight of expectations, of grind-it-out contests, of eye-popping shootouts, good quarterbacks, good running backs, rushing defenses licking their chops.

The only thing left to conquer: three teams lying in wait. There are no illusions, there are no added dimensions. Only : fly down the field. Only: fearless and true. Only: fight on. Only: win.

On to the customary* charts without further ado (and as always, click to enlarge): 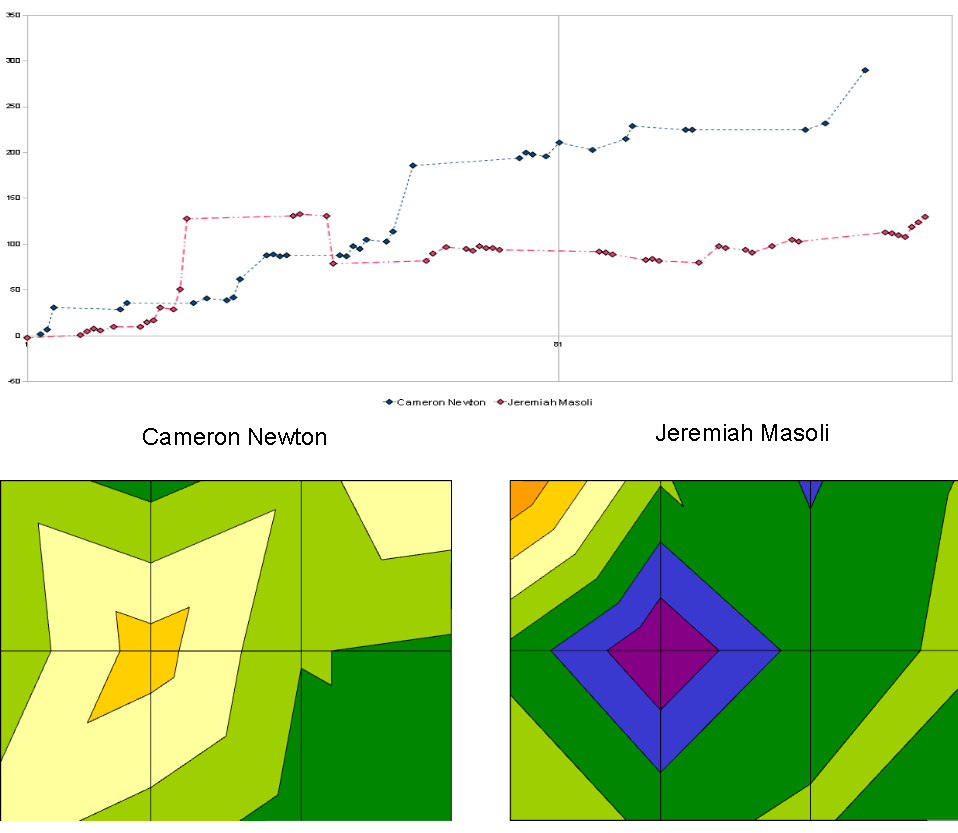 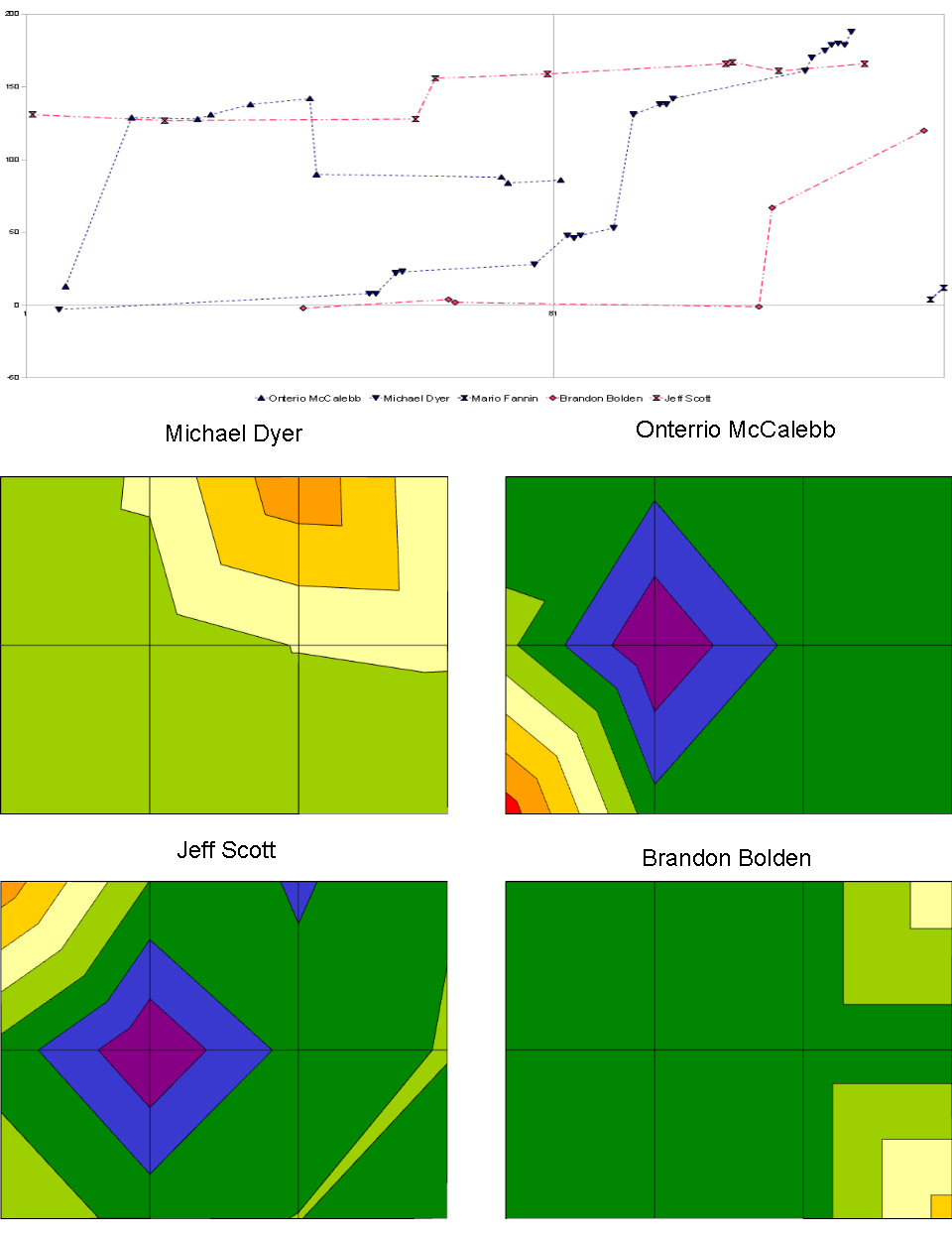 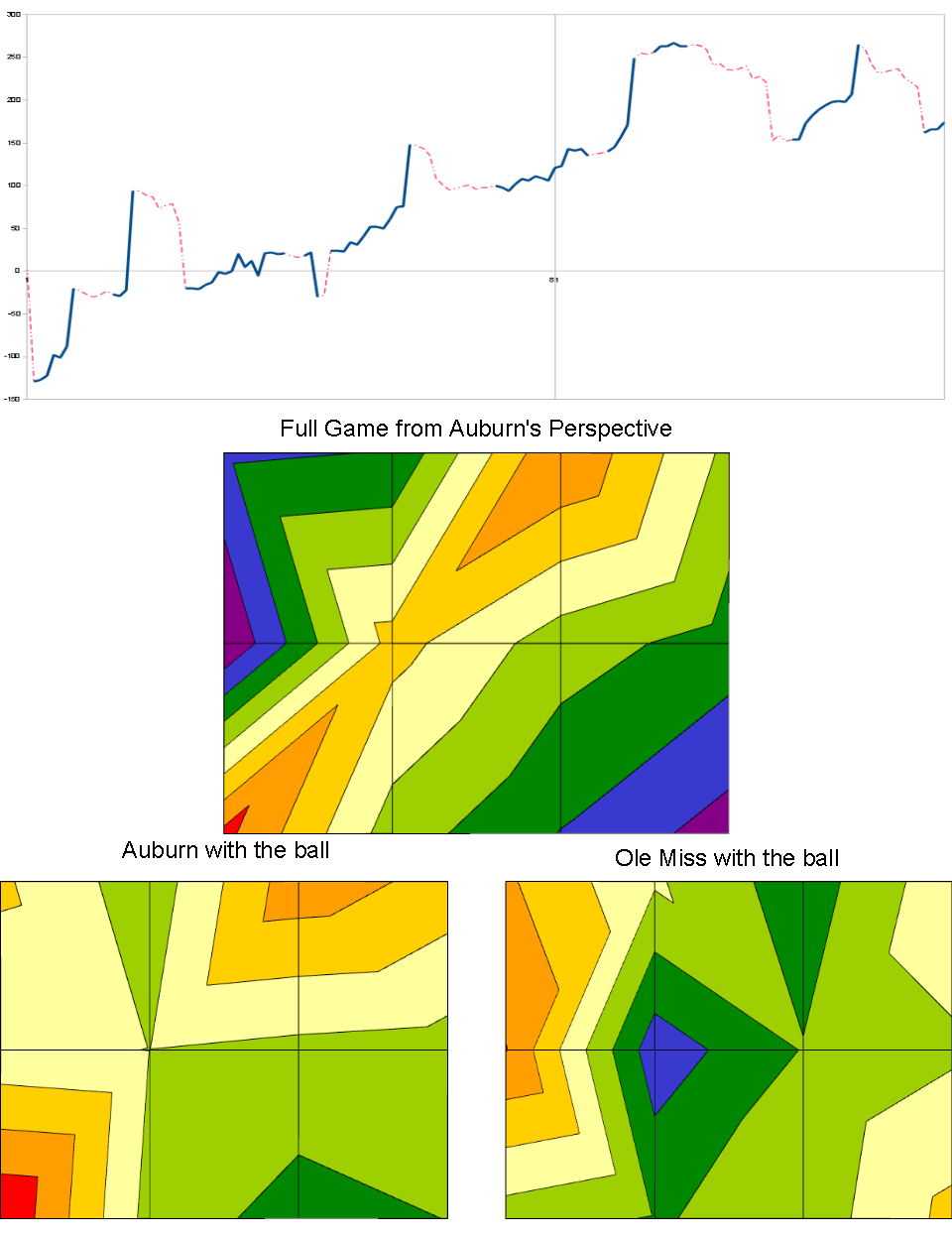 Was it any surprise Cam came right out throwing?

In order for Ole Miss to have any shot at the win, they had to flip our game back on us. Deliver some punishment to our wunderkind quarterback, deny him the backbreaking runs that have carried us so far, take that train off the rails. From the very first snap, they dared him to throw… and it didn’t make a hill of beans worth of difference, as he threw and threw and threw, and caught, and then through the defense our tailbacks burst.

It was a big finger right in Ole Miss’s eye, that we knew what their plan had to be, and we made it our plan. Just like that touchdown reception, thrown just beautifully to the back corner, with Newton sheltering the reception with his body, dragging both feet in an NFL-worthy catch. Was that even necessary? Probably not. Was it fun as hell? Was I laughing deliriously, replay after replay? Was ol’ Gus, behind whatever gameday exterior he maintained, grinning like a schoolboy? I can just imagine him sneaking over behind the Ole Miss sideline, sidling up behind Tyrone Nix, and giving him a wet willie. Gotcha! Don’t want Cam to run? That’s cool. The Plainsmen will take to the skies. They will throw the ball for which this world has been waiting.

Or hell, someone else can carry the rock. Good offenses are often built around a player who is a threat to score on any snap, no matter where the offense lines up. Great offenses often find a way to get two such playmakers on the field at all times. But how many offenses have three gamechangers – Dyer, McCalebb, and Newton – in the backfield? You can key on one man, you can slow down two, but when there are three players who can rush for a touchdown from anywhere on the field, good luck Chuck. Ronnie and Cadillac on the field at the same time was a dream come true, but this backfield is the stuff of legend. Dyer needs 107 yards to eclipse Bo Jackson’s freshman rushing record and he’s not even the leading rusher on the team.

This is to say nothing of the receiving corps, who have done the gritty outside blocking for eight weeks without seeing the ball much themselves, cracking down on corners and safeties and linebackers, opening up grass for the backs to run rampant. It’s a thankless, stat-less job that rarely draws the cameras, but it’s been absolutely crucial. And thus, last Saturday, I was happy to see them get their shot and make something out of it. Keep in mind that in recent years, the receivers might have been just as much of an obstacle to our offense as the defensive backfield, dropping passes, losing blocks, failing to elude the coverage. This year? None of that. Blake, Adams, Zachery and Burns made their catches (or their throws!) and had great games.

That said, the offense wasn’t the best thing about that game.

I first have to credit the defense for its toughness – that first quarter was a real shellshocker. After one busted run for a long, long touchdown on the second play of the game, and then two drives later, another Ole Miss touchdown drive of eighty yards on seven plays, they were on the ropes. This one could have gotten out of hand in a hurry, razorback style. But… the defense stood their ground. And not in the bent-not-broken pattern that’s left our fingernails bit down to the quick, but in truly dominating fashion : the middle belly of Ole Miss’s game was three three-and-outs, a brilliant fourth-down stand halting a promising Rebel drive, a forced field goal, and an absolutely crucial interception (not just a gift from the heavens, but the one turnover we needed to happen right when it did.) That took some serious moxie. And while Ole Miss did alter the box score in the fourth quarter, their latter efforts did nothing to reverse damage that had been done by halftime. That is some standin’ up.

But still, not the best thing. Take a look at the game progress line, at the topo charts for the game in full. What you’ll see before long is, much of this game is eerily matched. The first quarter gave Ole Miss and Auburn two touchdowns apiece, and in fact, the Admiral Nutt-Bars are slightly ahead after their second score. The two turnovers also cancel each other out. And the entire second half is a push. Basically, the amount by which we “win” in terms of adjusted yards can be accounted for – almost entirely – by our second-quarter touchdown drive. The rebels had an answer for everything else.

So what happens to bring us victory? What happens is the second quarter. What happens is our defense, screwing up their will and forcing punt, punt and punt, while the Auburn tiger offense pulled steadily away. Sure, we did the two things our scheme is supposed to avoid at all costs : give up the big play, and give up big rushes. Second play of the game, even. And it must be said that the tigers wore out as the fourth quarter neared, ultimately giving Brandon Bolden his due. But even so – they are the winners of this ball game. That second-quarter Darvin-Adams-Airshow touchdown drive made all the difference, but the reason it would stand on its own is the gutsy play of an Auburn defense.

“Defense wins championships.” By now, you’re probably sick of that refrain, too, as it continues to be laid at our players’ feet like unanswerable law. But there’s a fundamental truth wrapped up in that line. You win a football game by doing things for which the opponent has no answer, for forcing a break in the pattern. Traditionally, the pattern has been defined by each team’s defense bringing multiple drives to their end without scores, with the offenses playing the role of pattern breaker – whoever breaks through first and / or most, wins. Beamerball, I think, is the quintessential expression of this old-school philosophy. Auburn’s game, however, sets the pattern with an overwhelming, juggernaut offense, that (like in the Ole Miss game) rarely leaves the field without seven on the board. And while our defense hasn’t been dominant, they have that role of pattern breaker. They’ve played that role well, particulary with the late-fourth interceptions versus Arkansas, and now with a solid second quarter holding Ole Miss back while the tigers sped away. And that’s why I say that the defense was a bigger factor in this ballgame than the offense.

And on a bum secondary, too. Ted Roof’s comments after the game, that this year’s defense brings in a true freshman whereas last year’s would bring in a walk-on, seem particularly meaningful. At the very worst, losing Bell and Savage hasn’t broken us. Can’t help but wonder if this defense is in the same position as last year’s offense or last year’s special teams – stay with me, blue-sky and glass-half-full and orange-glasses on. Maybe this is the last unit to return to elite form, possessing an effective scheme and a talented coach, but with too much youth and too little depth to execute it in full.

We all know how precious little of Roof’s schemes were implemented in 2009, because there simply weren’t the horses to run with his gameplanning. This year, we’re still depleted, but there has been more blitzing, and there have been more wrinkles. Again, bear with me, but if… if he chose to pull out some of the stops, maybe given the kind of romping that Ole Miss seemed poised to do after the first quarter… and if those adjustments are what stiffened our boys’ backs (and perhaps, part of why they wore out in the fourth)… and granted, the TV coverage doesn’t give me any way of confirming any of my speculations, but…

…if that, then there are better days to come. There is a heart beating proudly in Jordan-Hare, and a plan that will bear delicious, grisly fruit. War Damn Eagle.

Here’s your master game progress line, season-to-date. I left Ole Miss’s line on there, but since we’re goin’ snack-cake-style this coming week, I didn’t put Chattanooga’s in. Dont’ go round hungry now! The way you eat that oatmeal pie makes me just wanna die : 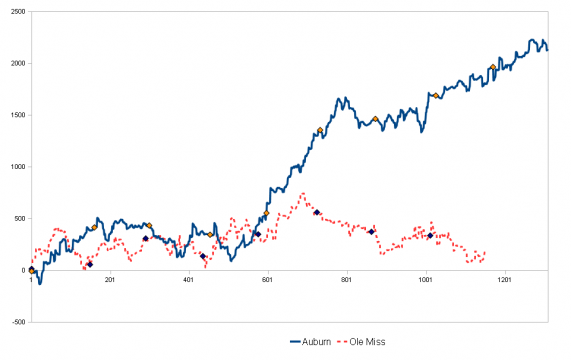 * (Don’t know what on earth I’m doing with all the lines and colors? This should fill you in.)