There was some drama leading up to the 1959 Auburn-Georgia game.

Then Dean Foy wrote him a letter telling him he should maybe pipe down if he didn’t want Auburn students calling Georgia students “Sons of Dogs (or to be more specific, Sons of Bitches).” Foy did not send the letter.

Then the game was played (in Athens) and Georgia won, 14-13. They were not gracious about it.

A few things stand out. One is that John refers to Auburn as “Auburn University” even though the Alabama Legislature hadn’t technically granted us university status yet..

The other—did you see it?—is that in addition to the editor of the Athens Banner-Herald, the president of the University of Georgia, and Georgia head coach Wally Butts, John sent a copy of the letter to… Pat Dye.

Why Pat Dye, then an All-American lineman for the Bulldogs? For the answer we turn to Cleghorn’s editorial response to Hinton in the Dec. 3, 1959 edition of The Red and Black: 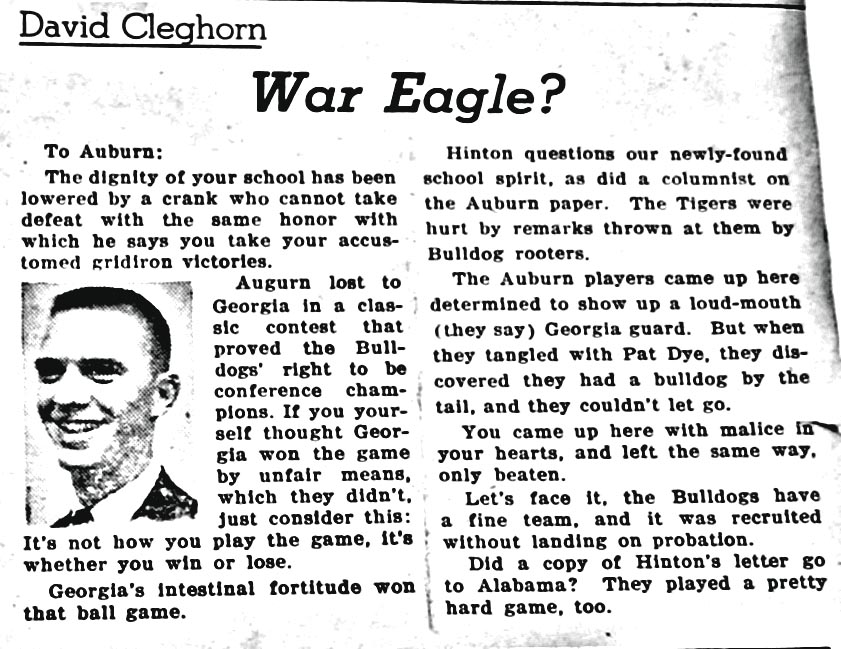 Did you see it?

What in the world did our beloved, now orange and blue bleeding Pat Dye do or say before the game to so rile Auburn folk? What in the world did he do or say during or after the game to deserve a certified rebuke from John R. Hinton Jr? How has this tidbit from the storied annals of the South’s oldest football rivalry escaped coffee table canonization and annual trivia chuckles from ITAT Radio?

Ben and I were curious. We took a printout of ol’ Cleggy’s column to Crooked Oaks to show Coach when we went out there several weeks back to interview him for the Bo story.  He looked at it for a little while, and finally, mostly to himself, said:

“I wasn’t no loudmouth.”