Boise State showed it could play a little defense Friday when the Broncos blanked Fresno State at home. Though Boise State started slow, they ended up outgaining Fresno State 516-125 in total yardage and Boise took out Heisman hopeful Kellen Moore after a fourth-quarter touchdown pass officially put the game out of reach at 44-0. The Broncos may be running up the score, but they need to if they want to pass TCU for the very valuable BCS No. 3 position. Oregon, Auburn and TCU all had off weeks. 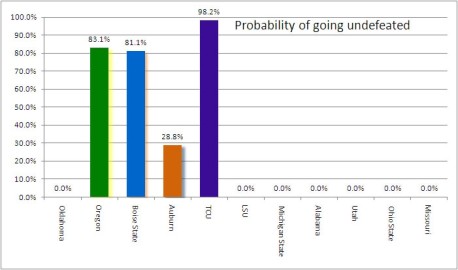 No. 1 Oregon (0.9764, up from 0.9753) had an off week to prepare for No. 21 Arizona last week. The Ducks’ odds of going undefeated rose from 82.1 percent last week to 83.1 percent this week. Last week I wrote that Oregon should be favored by 21 points in each of its next two games. Vegas currently has the Ducks as a 19.5-point favorite at home against Arizona. The model is predicting a comparable line next week against the Beavers. Oregon State managed a 36-7 win last weekend against Southern Cal, so maybe there is some room for optimism. To date, Oregon has defeated three teams that will be bowl-eligible: Stanford 52-31, UCLA 60-13, California 15-13.

No. 2 Auburn (0.9682, down from 0.9687) saw its chances of winning out drop this week from 30.6 percent to 28.8 percent after two bigger-than-expected blowout wins by Alabama and South Carolina, which inflated their statistics. Unlike its unbeaten peers, Auburn has a conference championship game that is being factored into the Tigers’ chances of winning out. Auburn’s week to prepare for the Iron Bowl should have them in prime shape for an upset. Vegas currently has the Tigers listed at 4.5-point underdogs to Alabama. An Auburn win all but secures a BCS bowl bid for the Tigers, but Auburn would still have an outside shot at playing in Glendale, Ariz., on Jan. 10 with a close loss and a big win over South Carolina. To date, Auburn has defeated eight teams that will be bowl-eligible: Mississippi State 17-14, Clemson 27-24, South Carolina 35-27, UL-Monroe 52-3, Kentucky 37-34, Arkansas 65-43, LSU 24-17 and Georgia 49-31.

No. 3 TCU (0.8995, down from 0.8966) held the No. 3 BCS spot for another week, although things are not looking good for the Horned Frogs relative to Boise State. TCU will finish the regular season this week with a trip to 1-10 New Mexico, where the Lobos are listed as 43.5-point home underdogs. The model has New Mexico’s chances of winning at 1.8 percent, which is absurdly optimistic. TCU needs to make a big statement this week to compete with the other big storylines. To date, TCU has defeated six teams that will be bowl-eligible: Baylor 45-10, SMU 41-24, BYU 31-3, Air Force 38-7, Utah 47-7 and San Diego State 40-35.

No. 4 Boise State (0.8860, down from 0.8634) will go undefeated…unless they choke against Nevada. The Broncos are 14-point road favorites against a 10-1 Nevada team with an offense that should be able to hang with Boise’s. Nevada has had a tougher road schedule than Boise in conference and could make this game close. Against the dregs of the WAC, each team has had its way. Against the better teams in conference, Nevada has played tight games, while Boise has managed blowouts. A win this weekend should vault the Broncos ahead of TCU for good. Boise will be looking to run up the score against No. 19 Nevada this week (if it gets a chance) and Utah State next weekend. Boise is second in the nation in points for (47.9) and points against (11.5), and is 8-2 against the spread, meaning they continue to regularly defy expectations. To date, Boise State has defeated three teams that will be bowl-eligible: Virginia Tech 33-30, Toledo 57-14 and Hawaii 42-7. 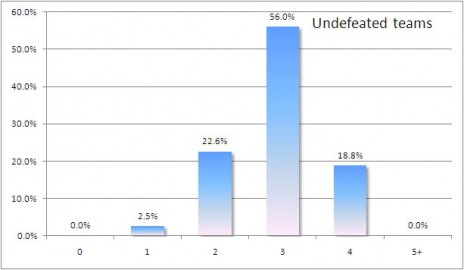 The odds of there being only two undefeated teams, most likely the easiest scenario for the BCS to handle has decreased from 30.4 percent last week to 22.6 percent this week. The most likely scenario is that three undefeated teams will remain (56 percent). The team with the most difficult remaining schedule is also the one least likely to make it through unscathed — your Auburn Tigers.

I’ll reiterate last week’s statement about a one-loss Auburn team: If Auburn falls to Alabama but wins the SEC championship, the Tigers would likely be positioned at No. 4 in the national polls, ahead of a one-loss LSU team. In that scenario, Auburn would still have a better-than-even chance of getting back into the national championship game. While an Auburn loss to Alabama and a win over South Carolina would leave the Tigers in a so-so position (I’m guessing this could range from a 25 percent to an 80 percent chance based on the scores of Auburn’s next two games) to maintain the BCS No. 2 ranking, beating Alabama but losing to South Carolina would be disastrous. Many voters would have serious qualms about putting a team that did not manage to win its conference championship (even if that conference is the SEC) in the national title game.