• UL-Lafayette covered on the road as four-touchdown underdogs but lost 43-21 in a game closer than the final score suggested. Despite outgaining the Ragin’ Cajuns by 478-215, Ole Miss needed 10 points in the 4th quarter to put the game away.

• Arkansas defeated the South Carolina Gamecocks 41-20 in a game that was never in doubt. Arkansas QB Ryan Mallett passed 303 yards, and Arkansas took advantage of two Garcia interceptions to cover as road underdogs.

• Mississippi State [ed. note: grrrrrrrrrrrrr.] managed to intercept the normally hyper-efficient Kentucky QB Mike Hartline three times and hold the Wildcats to just 17 points. The Bulldogs lost the time of possession battle 35:45 to 24:15 but were able to cover as 6.5-point home favorites.

• I was on Bourbon Street watching this game, routing for LSU with the locals from my hometown as Alabama failed to cover and the Tide lost 24-21 to LSU. I have never been more thrilled by an incorrect pick by The Model.

• Tennessee capitalized on five Memphis turnovers to the tune of 50-14. Things get a little tougher this weekend with Ole Miss coming to Knoxville.

Ole Miss @ Tennessee (-2.5, 55.5) — 11 a.m. CST
Tennessee and Ole Miss both need to win this game to go bowling this year. An Ole Miss win would further assert the SEC West’s dominance over the East this year. The Model is predicting a very tight game with Tennessee coming out on top. A quick look at the chart below reveals that Tennessee’s sole advantage in this game lies with the game being played at Neyland Stadium. Both teams have struggled to defend against any offense with a pulse, and both rank near the bottom of the SEC in all defense categories. Look for both teams to air it out against one another. Ole Miss could pull the mild upset here if QB Masoli can get into the game (he is not currently cleared to play). The Model predicts a close game, with Ole Miss covering as road underdogs. Prediction: Tennessee 28 – Ole Miss 27. 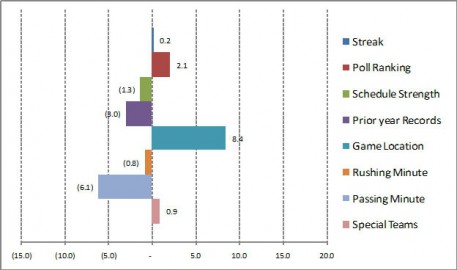 Vanderbilt @ Kentucky (-14.5, 54) – 11:20 a.m. CST
This game is my “Not a Lock” pick of the week. The Model has no clue just how banged up Vanderbilt is this late in the season and without that information, the predictions are biased in Vanderbilt’s favor. Vanderbilt put up just over 100 yards of total offense last weekend against Florida. Although no one would confuse Kentucky’s defense (30 points per game) with Florida’s (19.5 ppg), Kentucky is certainly more than two touchdowns better than Vanderbilt, regardless of what The Model says. Look for Kentucky’s second-teamers to get some playing time by the end of the second quarter. Prediction: Kentucky 33 – Vanderbilt 22. 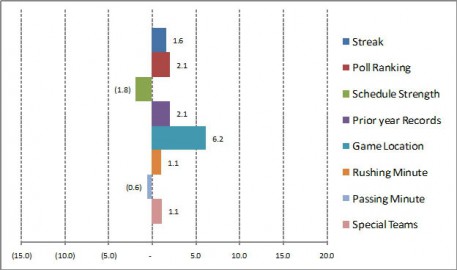 Georgia @ Auburn (-7.5, 65.5) — 2:30 p.m. CST
The Deep South’s Oldest Rivalry renews this weekend as undefeated Auburn hosts 5-5 Georgia. The Bulldog’s passing attack (241 yards per game) should provide a good test for an Auburn defense (allowing 241 ypg) that has made significant improvements against the pass in its last two games. It’s been said before, but Auburn could struggle against a good Georgia defense, ranked No. 15 nationally in total defense (306 ypg) and No. 23 nationally in scoring defense (19.4 ppg). That said, Auburn’s been there before, rising to the challenge against excellent South Carolina, Arkansas and LSU defenses. Auburn’s prolific rush attack (307 ypg) will square off against a Georgia team ranked No. 13 nationally, allowing only 106 ypg on the ground. The pass rush against UGA freshman QB Aaron Murray will be key in what Vegas thinks will be a close game. My Model has reached a new level of Auburn optimism and is predicting another Auburn blowout. Prediction: Auburn 40 – Georgia 21. 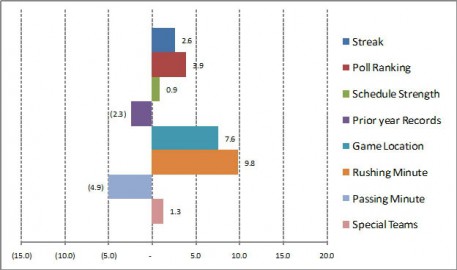 UTEP @ Arkansas (-28.5, 60) — 6 p.m. CST
A typically mediocre UTEP team (6-4) that ranks in the middle of CUSA in most offensive and defensive categories will see its one-game win streak end this week when the Miners visit the Razorbacks. As four-touchdown favorites, there’s not much of a chance UTEP will win, or even keep this game close after the first quarter of play. Look for Arkansas to jump out to an early lead and rest its starters in preparation for a trip to Mississippi State next weekend. Arkansas should put up 500 yards of offense in a game The Model also likes the Razorbacks to cover. Prediction: Arkansas 44 – UTEP 14. 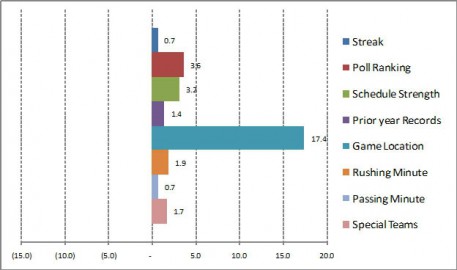 UL-Monroe @ LSU (-33.5, 46.5) — 6 p.m. CST
UL-Monroe is being passed around the SEC this year again. Having opened the season with a 31-7 loss at home to Arkansas and having taken a 52-3 beating at Auburn, LSU gets its turn with the Warhawks this weekend. The Model likes UL-Monroe to put up a fight, at least as far as covering the spread is concerned. LSU’s offensive struggles have been well-documented this season (25 ppg, 10th in the SEC), but the Tigers got things going against Alabama in the second half of that game. That said, LSU has not scored more than 33 points, much less beaten anyone by that margin, all season. Look for the “Warbirds” to cover. Prediction: LSU 38 – UL-Monroe 7. 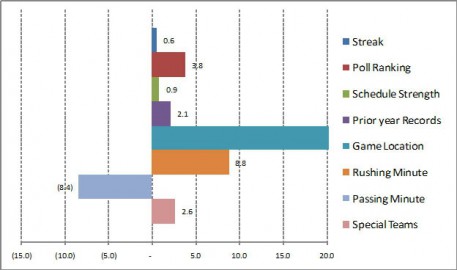 South Carolina @ Florida (-6.5, 51.5) — 6:15 p.m. CST
South Carolina visits the Swamp this weekend in a game to decide which 3-loss team will represent the SEC East in the championship game. South Carolina seems to have peaked with the Alabama win and has struggled on defense ever since. The Gamecocks do have the SEC’s No. 1 rushing defense (104.5 ypg) but are worst in the league in passing defense (265 ypg), passing efficiency defense (146.6 ypg), and turnover margin (-0.44 per game). Things will need to turn around for South Carolina to have a shot at a rare road victory in the Swamp. Florida’s offense seems to be improving after having bottomed out against Mississippi State in a 7-10 loss. Florida’s defense and special teams will be the reason the Gators win Saturday night. Look for the Gators to shut down Gamecock wide receiver Alshon Jeffrey as they lock up a trip to Atlanta. Prediction: Florida 25 – South Carolina 20. 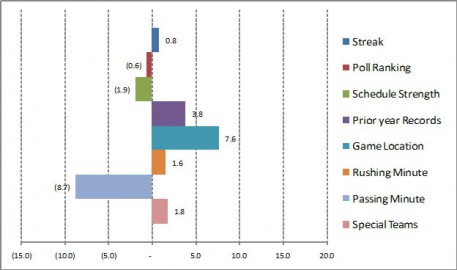 Mississippi State @ Alabama (-13, 47) – 6:15 p.m CST
Two of the top defenses in the SEC get together in a game that could be a signature win for Dan Mullen’s Bulldogs, should they be able to overcome overwhelming odds to defeat Alabama. Both teams are 7-2 and both lost to LSU on the road. Alabama’s losses this season have both come on the road. At home, the Tide are a completely different team, however. In home games, Alabama is winning by an average score of 32-6. Mississippi State [ed. note: grrrrrrrrrrrrr.] will try to slow things down and limit Alabama’s possessions to stay within striking distance. Mississippi State’s offense is going to struggle to move the ball against a stout Tide defense, allowing just 115 ypg on the ground and 17 points per game. If Mississippi State manages to win the turnover battle (tied with Alabama No. 1 in the SEC at 0.8 per game), they have an outside shot at the upset. Either way, look for the Bulldogs to cover, coming off their bye week in my “Lock of the Week” pick. Prediction: Alabama 30 – Mississippi State 19. 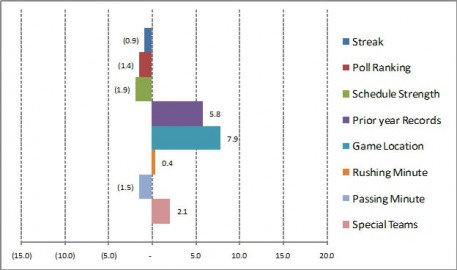 Mac Mirabile is a 2002 graduate of Auburn’s economics and journalism departments. During his time at Auburn, he was a copy and photo editor with The Auburn Plainsman. He has a master’s degree in economics from UNC-Chapel Hill and has written numerous academic publications on college football, the NFL and gambling markets. Last week’s Model can be found here. He can be reached at [email protected]