The South’s Oldest Rivalry, a bitter, bitter affair some years. This turned out to be one of those years. On the line for Georgia, the possibility to turn around a bad season (their worst in more than a decade) by beating second-ranked Auburn. For Auburn, a win meant a trip to Atlanta for the SEC Championship. The Tigers were looking to snap a four-game losing streak against the Bulldogs. And, of course, there’s all of that Cameron Newton controversy. 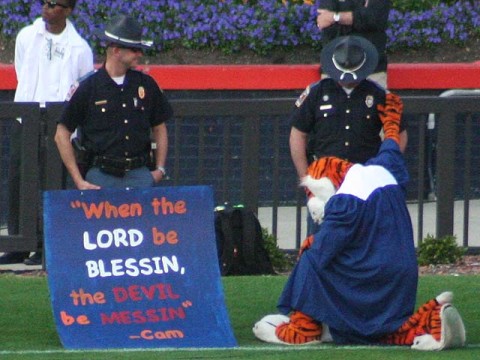 I’m generally staying out of that debate (aside for expressing my disbelief at the poor quality of reporting that emerged in the first two days of the story) mostly out of a fundamental human decency. I’m not covering the story and I don’t know anymore than anyone else. The thing will turn out however it turns out. Neither of your basic resolutions will do anyone much of any good, but the chips will fall where they may. I hope, hope, hope Auburn comes down on the right side of this because the alternative will be more than unpalatable. In the meantime, it is entertaining to watch people play a game.

So here are pictures, video and my Twitter impressions, such as they are, preserved forever. After-the-fact thoughts are in bold.

Nastinchka called my sweater retro. Just because I’ve been wearing it to #Auburn games for 15 years … I see her point.

@AUHD is showing an overhead shot of Tiger Walk. That might be of 1989 proportions out there. Did it seem bigger than normal to anyone else?

Oh it is ON. Curtis Luper wore a bow tie! Surrender now, Georgia. You can hide a lot of weapons in a bow tie.

Not kidding: @AUHD plays Nothin’ But A Good Time, Cam Newton appears on the screen. Students develop a UGA bloodlust.

Hope you brought your tickets, Tiger fans. Receiving reports that upper deck seats are going for $400.

Hunker down, it is a fine day at Jordan-Hare for housebreaking Bulldogs.

Cam Newton is the announced starter. (Not that there was much doubt, but I included it and this for posterity. It might not count at all in a few years — who knows? — but it counted on a beautiful fall Saturday. They announced him last in the lineup. It would have been cooler if they’d just mentioned it like any other game.) 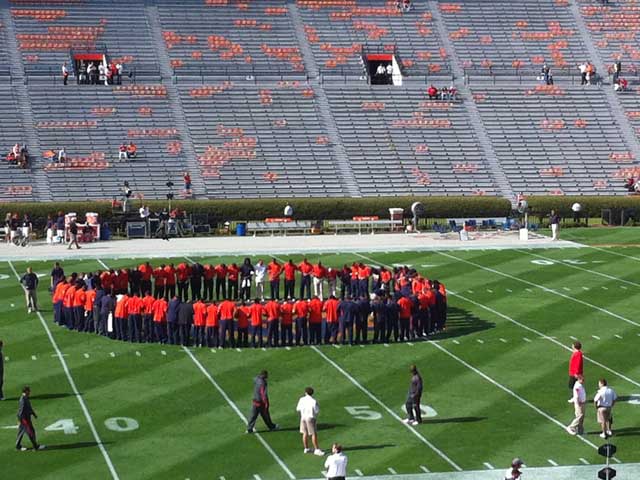 Praying for the souls of the poor puppy dawgs.

This place will be Beyond Thunderdome in an hour.

We’re all going deaf tonite. Riotous may not describe Jordan-Hare.

Buzzed by Nova – he flew just a few feet over us – and by two fighters. Now: football! 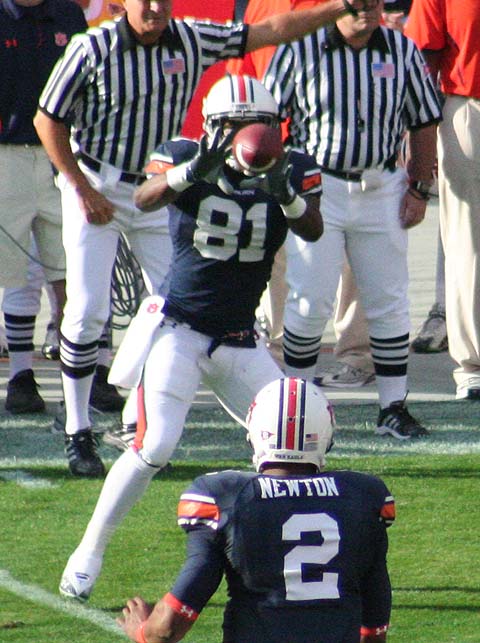 Georgia quarterback Aaron Murray looks terrified. Not that you blame him. By far the biggest road game in his short career, but he settled in nicely.

Georgia converts a fourth and one for a score. 7-7. 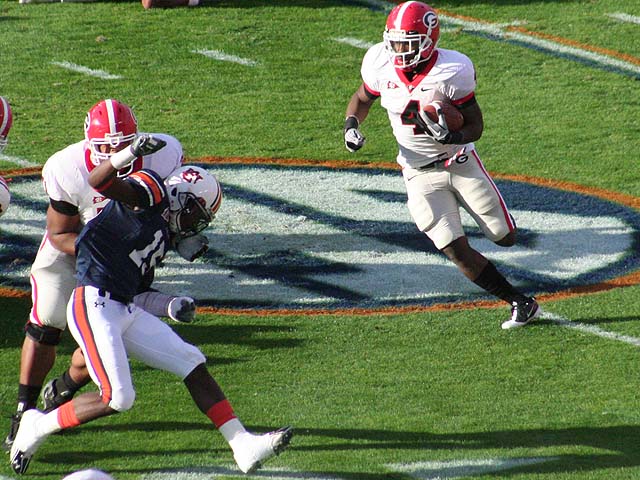 So UGA has a running back of some talent, AJ Green, a flustered QB and … that’s about it right now.

That’s a statue of liberty. Good grief. And, sadly, a holding penalty. Thing of beauty, everywhere except the holding call. And, sure, this is Georgia and you can’t leave anything out, but you have to think “If this is what Gus is showing Alabama, what is he hiding?” And then you smile. 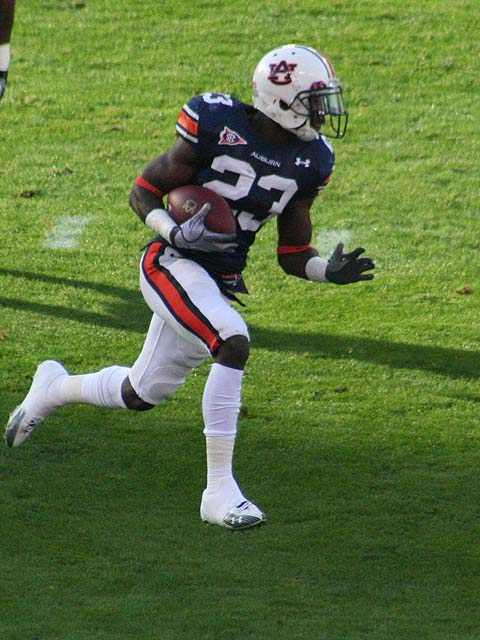 Flag, flag, interception, flag. Think it may be getting to the offense?

That stiff arm? Worth every penny. I only made the one joke. It looked more like a stiff arm than a head slap until I saw it on television. And I’m sure this was borne of frustration, if not the jawing and the extracurriculars that were already creeping into the game.

Freshman punter buries one inside the five. Four guys can’t down it. One of those days. Truly, this was the one place in the game where I fretted. If the ball isn’t going to bounce your way you need to find the signal as soon as possible, and this looked like a bad omen.

See number 8? He should be covered.

Murray to Green. 7-21. Down two scores? Not a bother. If Auburn had fallen back three scores I would have been squeamish.

Newton to Darvin Adams, inside the five. Easy enough.

TOUCHDOWN AUBURN! Onterrio McCalebb around left end for the score. 14-21. Simply because of this. You know Auburn will score. And have you ever seen a team, of any vintage at any level, that seems to chew up yardage so quickly? It isn’t just a function of falling forward for three yards, but these guys are eating down and distance like a lineman at the victory dinner.

Somewhere Eric Zeier is a little sad at Aaron Murray.

Nick Fairley has a bad arm or shoulder, but he’s battling.

Tigers force a punt. Big stop for the defense.

When the defense has everything else, there’s always Emory Blake. It isn’t quite catchy enough for a t-shirt, but close. 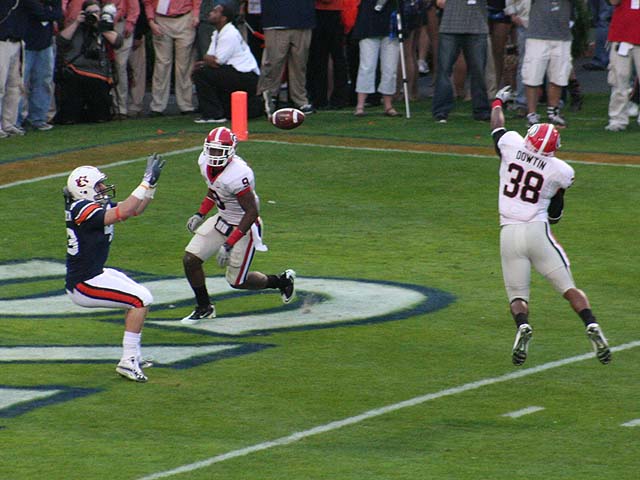 Hey Georgia? Where is your Herschel Walker? Our Bo Jackson is right here.

That’s Mr. Means if your nasty. 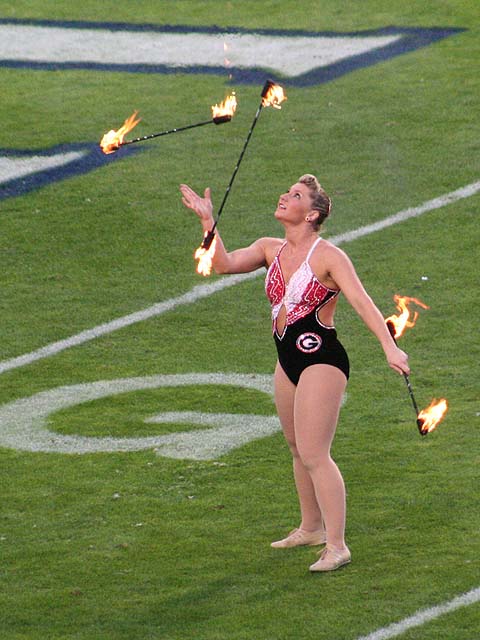 The Redcoat band has a lady who twirls four (FOUR!) flaming batons. Apparently the band plays music, too!

She threw flaming batons high into the night sky, doing splits as she caught them. How did you pay for college?

And now we kick around some mangy red and black puppies.

Not Bynes, but Chris Davis. He walks off under his own power.

Terrell Zachery on the reverse for 30 yards.

Nosa Eguae is not a dawg person. 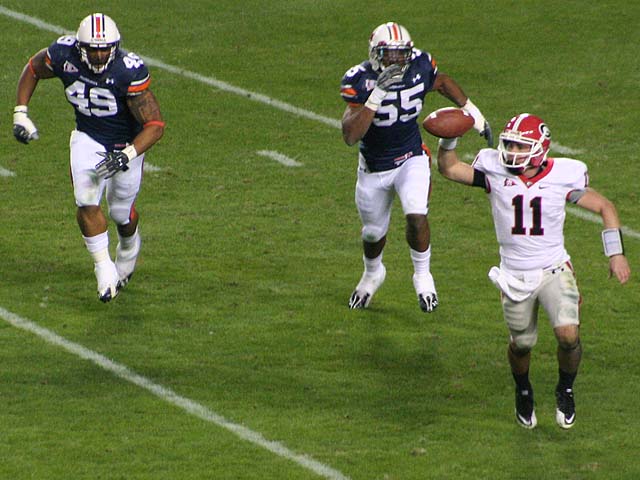 @AUHD I still say you need a Fyffe “Touchdown Auburn!” button to go with Ric Smith’s call. One guy can sit by the Fyffe button. When McCalebb or whomever scores, he presses the button. A good, blaring Fyffe bite plays as the crowd roars. We’ve already built an atmosphere that makes the screen and the audio the other 12th man, so why not add a bit of nostalgia? If they can’t staff it I’ll volunteer to be the guy that presses that button. Help me out here, Internet.

TOUCHDOWN AUBURN! McCalebb with his third score of the night. 35-28.

They flash Mike Dyer’s record on the screen and Bo floats over, hugs him and raises his arm in victory. It probably wouldn’t have mattered much what else happened, because this was the coolest moment of the night. In one of those odd bits of timing that only sport can seem to inspire, Jackson happened to be on the sideline celebrating the 25th anniversary of his Heisman when one of his individual records fell and he had that great moment with Dyer. I’d say he’ll probably re-live that moment for ever, but I think we all will. 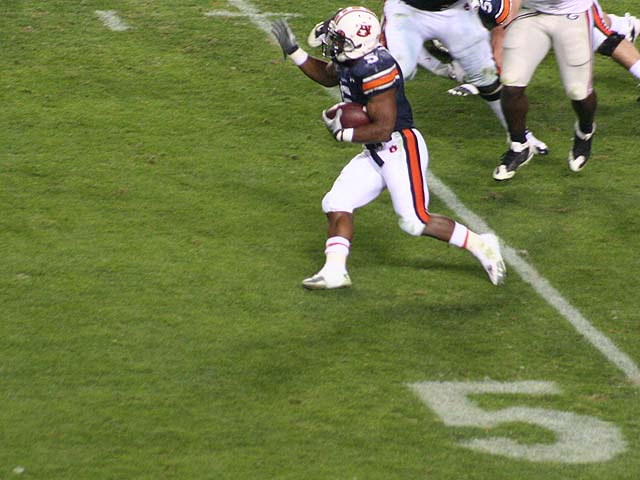 Man it is loud in here.

It just so happens that AJ Green is good.

BIG stand for the defense, holding UGA to a field goal. 35-31. And now the band strikes up their crazed rebel call. Love that fanfare. They need their own smoke effect for when they do this. And perhaps a trebuchet to launch something into the visitor’s section.

The band and students sing Lean On Me, the unofficial theme for the 2010 Tigers.

Dee Ford has your exclamation point.

Georgia has clearly gotten under the skin of the Auburn defenders. Tigers need to focus on the game. OK, look. Nick Fairley’s spear into Aaron Murray’s back earlier in the game was reprehensible and helped gift UGa a field goal. As for the rest of his reputation, the guy is playing within the framework of the existing rules. Don’t like it? Get the rules changed. If he doesn’t abide by your new rules, I’ll call that reprehensible too. Clearly, the scuffle at the end of the game was a regrettable moment for all sides. Players taking swings at opponents is first patently stupid (your target is wearing pads) and they should be punished accordingly. Georgia: going after Fairley (which is pretty clear in the replay) and storming the field en masse doesn’t make you innocent of anything.

Similarly, the booing of the Georgia player hobbling off and then falling to the ground on command from the sideline was pretty bad. Could he have hopped off? Sure, it did seem like it. What he did, though, is also within the framework of the rules. Cynical, perhaps, but get over it. Besides ….

Watching the seniors bask in their moment as their fellow students take up the S-E-C chant. They deserve it.

Proud for those seniors. They’ve been a strong and special bunch throughout and they deserve their moment.

Kudos again to @AUHD for the season highlights in the post-game. Great feature. 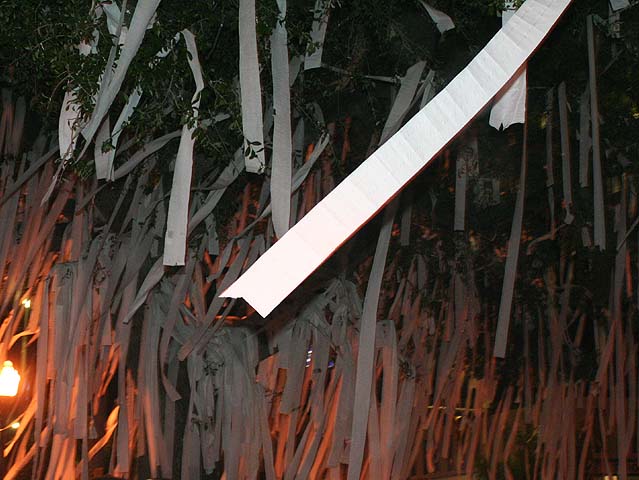 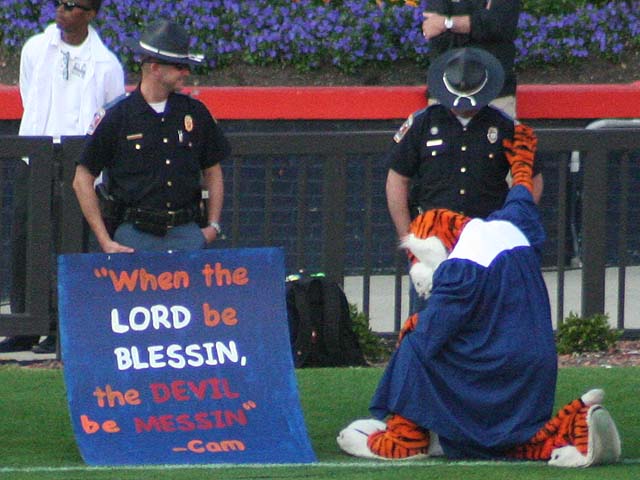