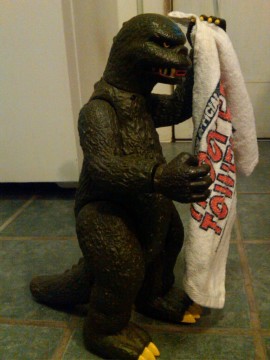 End Time So, uh, I added the “oak barrel” flavoring in the Coke long ago (if you catch my meaning). It’s that kind of afternoon:

• “Camera” Newton … the camera loves him.

• Fannin got tons o’ carries. Still … notice that he didn’t get any balls near the end zone when the game was early. But a step forward for Mario with no drops at all. Each running back in the crew got one TD each. Distribution son!

• How about Barrett Trotter on the ground? He ain’t no slouch!

Let’s look at how the team stacked up with some of Justin’s questions and thoughts from the “Friday preview: Louisiana-Monroe”

… the main thing I will be watching is to see if Mario Fannin will get some snaps at running back, and what he does with them.

Mario is just so good at pass protection and just so good at catching the ball out of the backfield – we’ve got to get him in there for however many plays a game going forward. Maybe this game will be his shot… to get back in the groove of things, read the right lanes and follow his blockers. And not fumble. It’ll be interesting to see what happens.

Elsewhere on offense, I’ll be looking to see who the ball is spread around to. Hopefully Lutz and Eric Smith will get some more touches …

Big “yes” on Lutz … but where was Eric Smith today?

And as far as Justin’s three wishes:

Where did you find your game genie dude? Well, maybe not the “Onterrio up the middle” thing. The genie was filing his nails when you mentioned that one.

The game is over and … wait … what’s that? The SUN?!?! What is up with this football in the daylight? You mean, I can unwind after this Auburn game today? Woah. That’s nice. I think I could get used to these afternoon games. Just keep winning Auburn and maybe we’ll do more a couple more of these afternoon games on CBS. Y’all have a fine weekend and remember: It’s great to be an Auburn Tiger!

At the half It feels like this game is flying by. It’s a nice easy Saturday afternoon for our boys in navy blue right now. But the last possession … eh … not too great. A penalty. A sack. A bad, bad throw. (I liked the shades-of-Chris-Todd-kick by Newton though.)

But you’ve got to love the ball being spread around on offense by our Tigers. And all the RBs getting some touches. Fannin is powering it forward. No turnovers. Newton is 11-14 passing at the half and hasn’t run it once. Our Tiger offense is running at a 4.43-points-per-minute clip right now.

But my favorite thing? The Tiger defensive line is having its way with the Warhawks right now. Their offensive line is disintegrating before our very eyes! Are all their penalties from false starts, holds, etc.?

Anyway, we’ve got to be OK with how things are transpiring. Sit back and enjoy it folks. See you at full time.

End of 1st What do we like? Two touchdowns in four plays to start the game for the offense? Nick Fairley’s throw-the-QB-to-the-ground-like-a-sack-of-potatoes sack? Just one penalty for the team total for five yards so far? Swede Killa … sorry that’s SWEDE KILLA … getting some touches? Cam Newton staying in the pocket and avoiding hits for this game for 21.9 yards per pass average? It’s 17-3 and an easy flight so far.

Pregame: 10:15 a.m. About an hour before kickoff. Jeremy pointed me toward a blog called trueAuburn and its “Auburn Spirit ’73” collection of cheerleader photos.

I’m keeping half an eye on ESPN’s Gameday … and damnittahell if I’m not tired of hearing about this “undefeated (as starter)” streak of Greg McElroy’s. When does America as a whole rise up and say “ENOUGH” to the Crimson Tide. I mean, it’s not just us that is sick of the constant stream of Tide propaganda at this point, right? Do it for America today Gators.

Also two out of three of the Gamesday crew has picked Clemson over Miami.

Oh yeah, here’s a nice little feature about Ronnie Brown getting up in front of the kids and telling them about a dark secret of his past.

Pregame: 7:45 a.m. So, just like you guys I’m sure, I’m very interested to see what Clemson does at home against Miami this afternoon. What do y’all think will happen? I’m thinking it will be a 50 total point affair with lots of drama, just like Cousin Clem’s game against us. Here’s hoping the Clemson Copycats pull it off.

Oh and here’s WarBlogle.com’s “Roundtable of Tigers Past” with former Auburn center Cole Cubelic checking in with Bret and Jeris and, thankfully, they can actually be candid with their thoughts about preparing for a Sun Belt foe:

Win — Get healthy — Get the young guys some playing time.

It was treated like just about any other week, but the mood around campus was usually lighter. More reps for the young guys at practice and you always seemed to practice against stuff that you didnt see on film. Shockingly the next week, when you’re playing an SEC team, you’d see on film what you had been practicing against the week before. The coaches always try to make you focus on the challenge ahead and I have no doubt that is what they are doing this week. LA-Monroe can sneak up and play well so the key is to take them out of it early.

Time to take the dogs on a walk and enjoy this beautiful weather. I’m super jealous of anyone going to the game today! War Eagle! Back in a few.

Pregame: 7 a.m. *Yawn* It’s early. I’m working on the third cup of coffee. Godzilla has his Official 2009 Trooper Towel … is there a 2010 model? Or has everyone’s attention been diverted to the show on the field this year?

I’ve had this Godzilla (and a Rodan) since I was four. There are pictures of me sleeping with him. Yeah, I loved some monsters as a kid, so I’m thrilled about this Auburn-Godzilla thing we got going on. So whenever someone tries to change the Cam Newton nickname, I’ll be fighting it every inch of the way! My Godzilla is my good luck charm for the season. My Trooper Towel was my charm for last season (mixed results). What happens when you combine the two? Back in a few. Maybe you should check out Mac’s Predict-O-Nomics picks and Justin’s preview?

According to Jay G. Tate, our boys are eating their pre-game breakfast right now too. Four hours to digest before destruction of our foe. I wonder what they’re eating? Oatmeal, hawk feathers with fresh fruit?