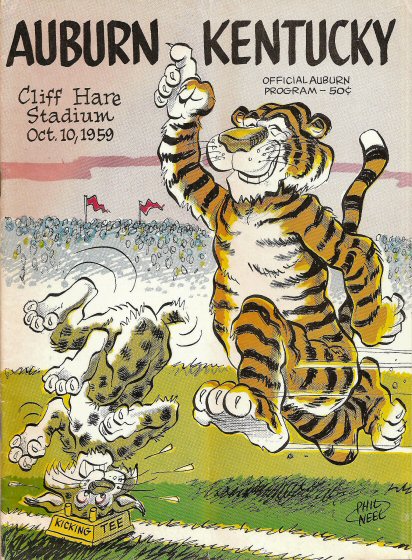 Auburn did fine in ’59 … Auburn 33 – Kentucky 0.
Art via the always awesome WeagleWeagle.com.

No, it was not a thing of beauty. At least, not on the whole; certain parts of it–the offense’s first half, that final incredible amazing absolutely f***ing epic drive–were as beautiful as anything Auburn’s done since Tubby’s salad days. But not on the whole, not when the offense puts up 37 points and more than 500 yards on the road in the SEC and still needs Byrum on the final play. That’s now 4 wins in 4 tries in games decided by one score, and eventually the other shoe’s going to drop.

But who cares? It might drop next week, maybe next month, maybe not until next year or even a few years. The important thing tonight is that Auburn played on the road, against an SEC team, a team that’s frankly a terrible matchup for us–we have no idea how to handle quick-n’-shifty guys or short passing games, and no one does quick-n-‘shifty and short passing like Kentucky, not to mention they commit more fully to cutting off Malzahn’s deep shots than just about anyone–and won. Our Tigers are 6-0. Our quarterback is a wonder and a joy. Our team still has room for improvement, starting against Arkansas next Saturday, and (importantly) they know it.

So things are good. Very, very good. The lightning is still snug beneath us. I’m just going to keep on riding.

Fulltime. We know this team can come from behind at home. We know they can dominate at home. And apparently squeak by on the road to two up-and-coming SEC programs. Whew!

Kentucky gave the Tigers everything they had in the tank. There were a few failings that we could point to tonight. But you got to focus on that last game-winning drive. This team had been in the position before and was all “Pffft. Whatevs.” and drove 88 yards in 19 plays (and time kept on ticking ticking ticking into the future for more than seven minutes) for Wes Byrum to coolly kick it through the uprights for a win and an Auburn record-breaking field goal. This team just knows what to do to win so far. Now, how about holding down that big lead …. hmm?

What a day of football in the SEC. But after the dust cleared, the Auburn Tigers and LSU Tigers are on top of the SEC West. Great. The next two games are going to land those of us prone to anxiety in a ward.

Halftime. Van checks in:
Glad our defense decided to get off the bus halfway through the first quarter. The UK fans are incredibly welcoming and friendly. Much like their defense.

Walt is sounding off from Kosovo in the comments below.

Our Tigers are scoring at will. Two horrible personal foul calls against Ethridge pretty much helped the Wildcats with a score against Auburn.

What else can we expect from our Cam? Another 4 TDs in the second half? Godzilla is amazing. Who about that off balance throw to Burns in the second quarter? I thought it was the dumbest ever decision as soon as the throw left his hands … and then it was brilliant.

Keep it up Tigers!

Gametime, 7:10 p.m. CDT: Awful news out of Auburn tonight folks. The Plainsman reports that James Foy died last night at the age of 93. Here is the AP story. Post any thoughts or remembrances in the comments below. Here’s a collection of photos and a video from last year of Dean Foy.

Pregame, 5:55 p.m. CDT: I sez: THE LONG NATIONAL NIGHTMARE IS OVER!!!! My favorite part? (Well, one of my favorite parts.) The entire Bama squad had the sun in their eyes on the sideline for at least 40 minutes. The rest of the stadium was in shadow. It was like a spotlight in a dark room. 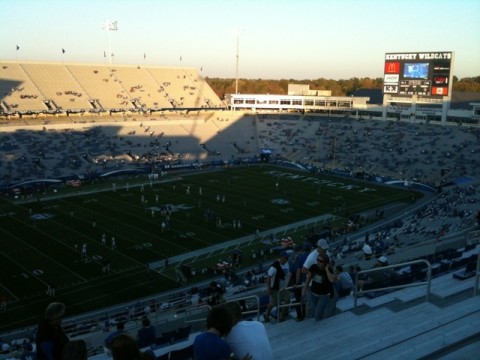 Pregame, 5:40 p.m. CDT: Like most of you … I’m glued to the Gamecocks vs. Crimson Tide game. It was beginning to feel like a certain game in Auburn last year.

Louisville and Auburn fans join forces to hate on Kentucky. Is it turning ugly already?? 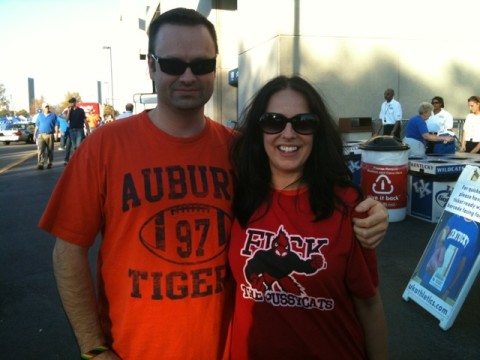 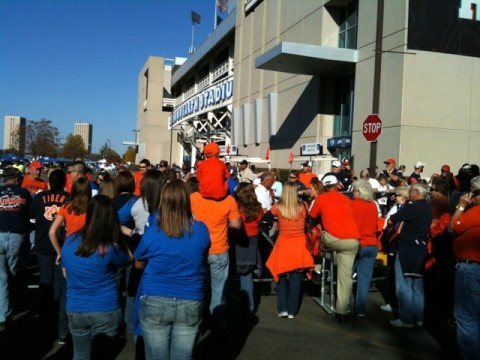 Van says: The player entrance 45 minutes (!!) before Tiger Walk. … The Kentucky fans are frightened and confused by the delirium we AU fans are exhibiting as we watch SC hammer the Tide. 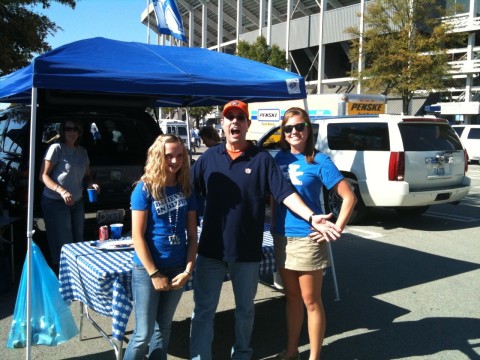 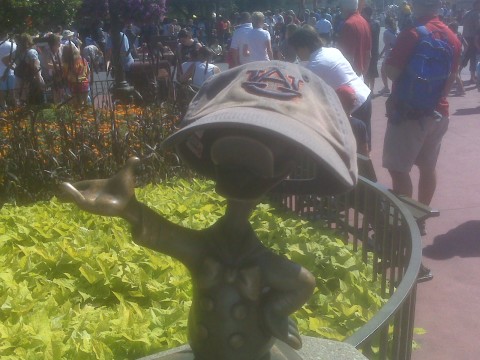 Pregame, 2 p.m. CDT: Smilin’ Jack wants to know something, Auburn fans. Are you for Auburn? STAND UP FOR AUBURN!!! 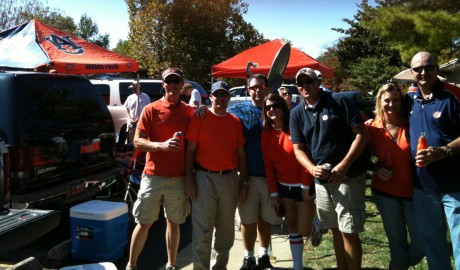 We are prowling Lexington before tailgating time. There’s a giant horse competition in town and traffic is horrible. (A giant competition, not giant horses; Auburn’s bringing the giant horses later this evening.) 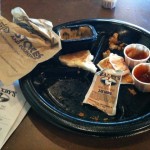 Pictured here are the grim remains of our all-too-rare Zaxby’s meal. [– Ed. Note: Click photo for TWER’s EagleVision of the remains.] Living in Illinois, we don’t get to experience the joy of real Southern-style chicken fingers very often.

Auburn folks are all over the place. We should be well-represented tonight. More soon from UK tailgaters party. We are infiltrating behind enemy lines. Then Tiger Walk at 5:30 EST at Gate 9. War Eagle! –Van

Pregame, 7:50 a.m. CDT: Good morning sleepyheads! It’s great to be an Auburn Tiger! The early eagle gets the worm!

The weather looks fantastic tonight in Lexington: 75 degrees at kickoff and dropping down 10 degrees by game’s end. We’ve got the boys from The Wishbone at the game and they’ll be checking in from time to time. We might have an appearance from your friend and mine, WarBlogEagle’s Jerry.

If anyone is going to the game here’s a link to the Tiger Walk map. It’s happening at Gate 9 at Commonwealth Stadium at 5:30 EDT.

Our main man Justin came through in the clutch and offered his Kentucky preview. It’s setting off a firestorm of debate about the dangerousness/lack-of-claws? of the Kentucky offense. Great read. It will put a fear in you though. Not for the faint of heart.

John has his spreadsheets for Week 5 (and let’s offer our condolences for Ol’ Deller.)

Our football champion, our co-captain here at TWER, Jerry, checked in and offered a couple of thoughts on the game tonight. More in a bit.