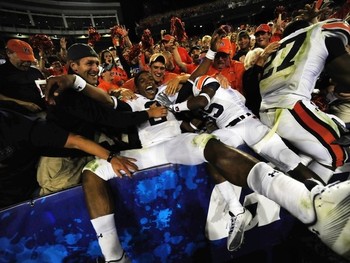 Nope, still not Jerry. Yup, Auburn is still undefeated. And, hey, bowl eligible too! That might seem like no big deal, a feat far short of our expectations for 2010. But it speaks incredibly well of this coaching staff that only 22 months after the wreckage that was the conclusion of the 2008 season — which was followed by the, ahem, less-than-popular hiring of Gene Chizik — the program has vaulted to the point where being merely bowl eligible isn’t even a fact worth talking about.

Obviously, I have some gripes about last night’s game and some concerns as I look forward to the next couple of weekends. I’ll get to those in a minute. First, though, let us all bask in the glory of waking up on a Sunday after Auburn just won a hard-fought Southeastern Conference road game, stands as one of two unbeaten teams in the conference and has cleared one of the hurdles that tripped up the team a season ago. None of these is a small thing, and we fans should appreciate them greatly.

Oh, and Auburn has a quarterback legitimately in the Heisman Trophy conversation. Cam Newton is officially and 100 percent “The Man.” What a weapon. What a leader. Take a second to imagine this Auburn season without him. If that doesn’t make you say a small prayer of thanks, I don’t know what will.

I wouldn’t have guessed that at this point in the season, with all the hype he’s generated and the film on him, Newton would still be able to set a season high in rushing yards, but that’s exactly what he did, with 28 carries for 198 yards and four touchdowns. From a fan’s point of view, how nice is it to be confident on 3rd and short? On that beautiful, game-winning final drive, Auburn faced 3rd and 2. Everyone everywhere knew who was going to carry the ball, and the Kentucky defense was coming out of a timeout where surely the entire focus had been on how to stop No. 2. The result of the play? Newton carried for 4 yards and a 1st down. Crazy good, he is. 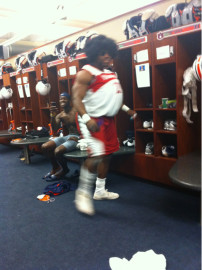 As for the part of playing quarterback that involves, you know, throwing the ball, Newton once again did better than fine — 10 yards per attempt is nothing to sneeze at, and it’s hard to quibble about the lack of touchdown passes when he took the ball into the end zone himself four times. His completion percentage (61.9 on 13-for-21) was OK. But in all, if you’re an opposing defense, you’d still very much rather see Newton throwing the ball than running with it.

A commenter last week pointed out Newton’s worrying tendency not to step into his throws. That was taken to a bit of an extreme on that second-quarter heave to Kodi Burns that Newton threw with both feet in the air. Somehow that ball wound up exactly on target, sailing over and through a crowd and landing basically between the 1 and the 8 on Burns’ jersey. So that was cool. But … I’d prefer we not see too many more of those passes. Gotta feel like most of those aren’t going to end up quite so fortunately.

Another week, another sloppy interception. This one seemed to be equal parts bad decision and bad throw, and pretty much set the tone for whole ridiculous third quarter. I never want to think about that third quarter again. That was the exact wrong corner of the Punnett Square that has been discussed on this blog before: ineffective Auburn offense, really ineffective Auburn defense.

Auburn continues to get sliced apart by the short passing game. Look, I get and respect the whole idea of never giving up big plays. Makes sense in a lot of ways (and can’t argue with the results). Auburn gave up just one play over 20 yards all game — that painful, felt-like-three-minutes-in-real-time, 26-yard scramble by Cobb that consisted of a series of Tigers defenders diving at his heels and missing. But at the same time, wouldn’t it be nice to see the defense do something that broke the opponent’s rhythm? I mean, Mike Hartline looked like Drew Brees out there. He completed his first 14 passes, and the only incomplete pass he threw in the first half was a drop by an open receiver. It would be nice to see the defense be more disruptive, more assertive, more playmaking. Get more pressure on the quarterback. Force more turnovers (one interception isn’t enough).

Auburn’s linebackers and safeties continue to struggle getting off blocks, and on all those dink-and-dunk passes it always seemed like there was just one Tigers defender in the frame. If that first guy missed the tackle, the play would go for 8 or 10 or 12 yards before anyone else got there. Just didn’t feel like guys were swarming to the ball with any kind of urgency or fire, at least not consistently. Give Kentucky’s coaching staff credit for scouting Auburn and generating a game plan aimed exactly at the Tigers’ weak spot.

Auburn outgained Kentucky 521-336, ran 73 offensive plays to UK’s 59 and actually led in time of possession for once, 31:46 to 28:14. Yet despite that kind of dominance, Auburn still needed a couple of breaks to win. If Derrick Locke hadn’t been injured, there’s a decent chance that last Kentucky drive ends in a touchdown instead of a field goal. Just as in the South Carolina game, Auburn had a potentially game-changing fumble go out of bounds just before the defense jumped on it. And that oh-my-god-what-the-bloody-heck-are-they-doing final kickoff return could have handed the game to the Wildcats on an orange-and-blue platter. Auburn also had a costly eight penalties for 87 yards, and even if the two personal foul calls against Zac Etheridge were bogus (I mean, seriously), that’s still too many penalties, too many bullets from our own guns ending up squarely in our feet.

The non-Byrum segment of Auburn’s special teams continues to be less than special. No disasters this week, unless you count the opening kickoff return by Cobb, or that near-miss on the final return, but no real positive plays, either. Kentucky’s two third-quarter drives *shudder* came on short fields after short Steven Clark punts (and one irritating illegal formation penalty). Thank goodness for Wes Byrum, though. He seems to have shaken whatever doldrums he was in earlier in the season, and it’s completely reassuring to have a kicker you can trust. It took so much pressure off Newton and the offense on that game-winning drive, knowing all they had to do was reach a reasonable field goal distance.

What a drive that was, too. A relentless, impressive, confident march to victory. Basically perfect. Auburn ate up the game’s final 7:31 and faced 3rd-and-long only once; Darvin Adams made a sweet grab to convert that one, right at the start of the drive. From that point on, the Auburn win felt all but inevitable.

Which brings us to this morning, when all these gripes feel minor in comparison to the big picture. The picture in which Auburn is in control of its SEC destiny. Speaking of the SEC, I forgot to ask: Did anything interesting happen elsewhere around the conference yesterday? Just wondering. You know, like any big upsets or anything? Like maybe a team I was calling invincible a week ago got its armor punctured in a big way? Mwah-ha-ha-ha.

Here’s the bottom line for this knee-jerk reaction: Auburn’s not a perfect team, not by a long shot, but its record remains that way. And with the big tests coming up, Auburn’s probably going to have to put together a complete game eventually, or it’ll come up on the wrong end of one of these cardiac finishes. But even though the Tigers can’t take anyone in the conference for granted, what we know today is that there is no game remaining on the schedule that Auburn can’t win.