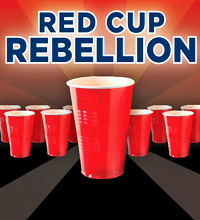 You know the drill by now, right? I ask questions of the hilarious go-to Rebel blog Red Cup Rebellion, they ask questions of me, we answer them for each other and post those answers. Knowledge is gained. Mine for them are here; theirs for me are below. Q’s in bold, A’s in quotes.

“It appears that the defense is capable to stopping the run when it isn’t deathly afraid of the pass. That is to say, against an Alabama team with a one-handed Julio Jones, the Rebels sold out on the run a good bit, and it worked. Alabama’s dynamic duo each averaged fewer than four yards per carry. The next week, when they decided to take away the Arkansas pass (which they did quite well), but it opened everything up for Knile Davis to have an absurd day (which saw him rush for a whopping eight yards per carry).

“Also, the team is inconsistent because they’re either the youngest or second-youngest team in the SEC. If you run right at us, we’ve got experience there. If you run around the edges or misdirection (see: exactly what Auburn does), we’ve got no answer. The starting secondary isn’t young, but they’re also not good. The backups are generally freshmen who are promising but have no idea what they’re doing out there.”

2. Jeremiah Masoli has seemed a lot less interception-prone and a lot more in charge of things as the season has gone on. What’s he doing well with right now? What’s he still struggling with? I’ll ask straight out — do you think he and the Rebel receivers can take advantage of Auburn’s infamously generous secondary?

“He’s doing a good job of throwing the ball away (or inexplicably running out of bounds for losses) when there’s nothing there. Early on, he was forcing a few throws, and that cost us (perhaps you heard that we lost to Jacksonville State… 🙁 ). Now he’s much more willing to take what the defense gives him. That’s not all though. Masoli is actually throwing a better ball, and our tall, physical, young receivers are going up and getting it. Ja-Mes Logan and Melvin Harris are two big bodies on which you should keep an eye. They seem to know how to get the ball out of the air.

“He has struggled with improvising runs. Perhaps it’s just that every defense looks to take those away from him, but obviously the same thing is being done against Auburn, and Cam Newton isn’t doing too bad (cough) Heisman (cough). It’s been interesting to see Masoli look down the field for so long instead of scrambling when plays break down.

“I would guess that we’ll do alright against your secondary. As I said before, our receivers are strong and use their bodies well. They haven’t shown the same problems we had last year of tipping balls to defensive backs, but of course me having said that means it will happen three times against you.”

3. The Rebels have had a lot of trouble stopping the run this year. Why? Is there anything they can do to change things up before Auburn comes to town?

“As I mentioned in the first answer, it’s not that we can’t do it. It’s that our pass defense was so poor early on that we couldn’t dial up run blitzes. We were dropping seven into coverage, and that hurt a lot. Also, after we lost Senior DE Kentrell Lockett to a season-ending knee injury, we were left with ends who overpursued and lost contain. That has been disastrous for us.

“We have moved DT Lamarck Armour to DE in order to help stop the run a little better. It worked quite well against Alabama but not so much against Arkansas. I would guess we’ll struggle a lot to contain Newton, Dyer, and McCalebb. The type of misdirection (and somehow still power) runs that Malzahn calls are just mind-boggling to our players.”

“The interior of our line is pretty terrible. Again, it’s freshmen starting at both guard positions and center. Thanks for recruiting offensive linemen Ed Orgeron! Anyway, the tackles are alright, but even they aren’t solid. You won’t sack Masoli a lot, but that’s only because he’s fast and has a quick release. You’ll disrupt plays over and over again, and it will be the difference (on defense).

“The running game is a strange animal. We have had excellent games and terrible outings. Against Fresno State, we rushed for over 400 yards. Kentucky gave us running room as well. Then Alabama and Arkansas just stuffed us over and over again. We’re trying to use runs that don’t rely much on the offensive line (i.e. misdirections, zone reads, and option looks), but even those aren’t working well. It appears that defenses know whenever we’re about to run the option and sniff it out with ease. The running game is really frustrating. If we’re going to win, it will be with passing.”

“Well, I have already talked about Nick Fairley (who will destroy us), so let me say something about McCalebb. The shifty, speed-back that he is will be really difficult for us. Michael Dyer’s running style is something our defense generally stops, but McCalebb will be difficult for us to tackle, since we won’t be able to get good hits on him. Of course, Michael Dyer will probably run well too. It’s difficult to stop anyone when your entire defense is keying in on Newton.

“I’m not sure which one of our receivers will play well, but it’ll be one of three. Melvin Harris, Ja-Mes Logan, and Markeith Summers each present matchup issues with an Auburn secondary that hasn’t shown the ability to be physical. Harris is 6’6″, Logan is 6’2″, and Summers is 6’1″. All can jump, and they all catch the ball well too (unless Markeith Summers shows up with bricks for hands; The guy may drop 4 of the 5 balls thrown to him one day. The next, he’ll catch all eight.)”

6. One more: what are your expectations for this game? Care to make a prediction?

Many, many thanks to RCR for helping us out on relatively short notice.