Thor Burk, he of the fantastic Still Saturday in Our Hearts, fills in for our humble absentee blogger. 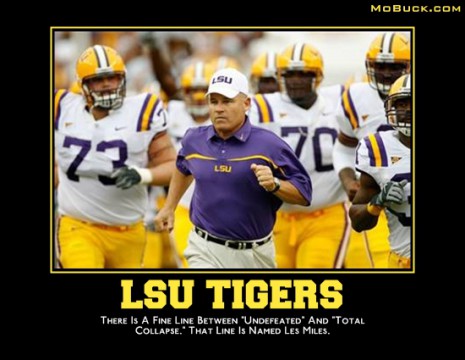 Week 6: Kentucky. Kentucky got down to Ole Miss early and never really caught up.  They closed the gap to 21-17 with a field goal before the half, but Ole Miss took over in the second half and led 42-20 in the 4th quarter.  Give the ‘Cats credit for clawing their way back, but a missed chance on an onside kick gave Ole Miss the ball and the ability to run out the clock for a 42-35 win.  Kentucky gained 424 yards, but turned the ball over 3 times.  They held Ole Miss to 300 yards of offense, but giving up 42 points to this Mississippi team has me drooling over next Saturday night in Lexington.  My only concern is that it’s a road game.

Worry Level: Down to a comfortable level

Week 7: Arkansas. The Hogs took the week off, and we can only hope they were wallowing in self-pity or preparing for Texas A&M this weekend instead of looking forward to the Auburn game.

Week 8: LSU. We all know what happened in this game, but those who watched it live had a different experience.  I thought Tennessee had won for about ten minutes.  I was on the phone screaming at my buddy Jake “It’s happening again, IT’S HAPPENING AGAIN,” recalling Les Miles’ clock management in last year’s Ole Miss game.  It looked like LSU had 16 players on the field in the huddle, and Tennessee is running people on and off, LSU snaps the ball when QB isn’t ready and it’s a fumble, clock runs out, Tennessee wins.  I rewound it, watched it again, rewound it, paused it for others to see and we were all laughing at LSU… Then they reviewed the play, called the Vols for an illegal substitution and gave LSU another chance, they score the TD and win the game 16-14.  Stunned.  The good news is LSU looked like total garbage against a very bad Tennessee team.  The Bengals scored a TD on the first play from scrimmage and the last, they outgained the Vols almost 2 to 1, but their inept offense is constantly tripping over its own feet. There is a fine line between “undefeated” and “total collapse.” That line is named Les Miles.  I wish we were playing them this week.

Worry Level: Down, down, down

Week 9: Ole Miss. Colonel Reb isn’t crying anymore. Mississippi has won two games in a row and looks to have gotten its act together.  Kentucky outgained Ole Miss by 125 yards, but the Rebels didn’t make many mistakes and won more comfortably than the 42-35 score indicates.  Jeremiah Masoli continued to look like a below average QB, throwing for only 90 yards and rushing for 43, but the Rebel offense was effective enough to score 42 points.  The good luck for the Rebs is likely to run out this week as they play Alabama in Tuscaloosa.

Worry Level: Up another tick

Week 10: Chattanooga. The Mocs took the week off and get ready to play The Citadel this weekend in a conference matchup.  Chattanooga is 1-1 in conference while the Citadel sits at 0-2.

Week 11: Georgia. A.J. Green was back! And the Dawgs still lost to Colorado, 29-27.  Auburn fans, it isn’t nice to laugh at another team’s misfortune.  Though I would probably laugh at Bama or LSU if they were in UGA’s position, there is something very sad about what’s happening to the Bulldogs.  I pity them, more than anything.  The Buffaloes jumped on Georgia early with a 14-3 lead and then I batted an eye and it was 17-14 UGA.  The Dawgs had the ball in easy field goal range in the waning moments of the game with enough downs to run the clock out and kick the game winner. Instead, Caleb King fumbles the ball, and Colorado pulls off a miracle.  And it’s a very bad Colorado team; they’ve beaten Colorado State and Hawaii, so they could compete in the WAC or the MWC, but they also lost 52-7 to California.  The Dawgs are in a dark place. They lost a promising freshman for the year in T.J. Stripling, and A.J. Green injured his hamstring after missing the first four games of the season.  Mark Richt is a nice guy, but I have thought several times watching Georgia this year that that entire coaching staff needed to be fired.

Worry Level: Worst UGA team in at least a decade.

Week 12: Alabama. The score was more of a condemnation of Florida than an anointing for Alabama.  This wasn’t like the Arkansas game where Bama had to come from behind and show their resolve to win the game.  This was ineptitude by an extremely fragile Florida team on the brink of collapse.  On Florida’s first drive they took the ball down the field with a ton of confidence and were poised to score a TD to go up 7-3 in Tuscaloosa.  On 2nd and goal from the two, they caught Bama’s defense in the perfect alignment, but a bad snap and the QB draw by Burton only got a yard instead of the easy TD.  On 4th down they run the jump pass and Bama knows exactly whats coming and interception and game over.  You might as well have turned the TV off after that. Florida was done.  They lost all confidence and went into full meltdown mode.  Alabama only had 273 yards of offense in this game, but that’s all they needed to win the game 31-6.  Ingram had 47 yards and McElroy had 103 passing.  Not that scary when looking at the box score, but very scary that’s all they had to do to win the game.  McElroy may not be very accurate throwing the ball more than 5 yards down the field, but since that’s whats been hurting our defense all year I am becoming more and more scared of Captain screen pass.

Mississippi State hosted Alcorn State and got the backups plenty of work as the won easily 49-16.

Clemson was a trendy upset pick with Miami coming to visit.  Auburn may have hurt Kyle Parker more than anyone thought; word is that if Clemson hadn’t been off last week he couldn’t have played. As it was, he wore a special back brace during the game… that  obviously didn’t help him since he threw three INTs and only had 149 yards passing.  The RBs we grew too familiar with two weeks ago both had nice days with Ellington going over 100 yards and scoring all 3 of Clemson’s touchdowns, but the Hurricanes were too much for Clemson — 30-21.

South Carolina had the week off to hopefully install a Bama-beating playbook.  The Gamecocks host the Tide this week in a throwback battle that could be the game of the week. (Yep — Gameday is heading to Columbia).

It’s looking like a trip to Atlanta is possible, but we have to beat Alabama.  The chances of us going 11-0 are slim, and the chances of Bama losing two games are none.  But it’s a sunny day in Auburn and things are looking better every week.