Week 6 saw The Model go 3-3-1 ATS (against the spread). To my credit, I warned against her taking Houston to cover against Miss State, and that game wasn’t even close.  By halftime, the Bulldogs were up 33-10; even Miss State couldn’t blow that lead.   So I’m considering my “Not a Lock” game of the week a push.  Last week, I picked Auburn to cover against Kentucky in my “Lock of The Week” game and it looked like they would until the second half began.  My lesson from this week: don’t underestimate Kentucky.

Texas A&M, who was averaging 500+ yards of total offense against cupcakes, sputtered against an SEC defense and was held to only 324 yards of offense.  They also turned the ball over four times to Arkansas and still had a chance to go into overtime with a last second Hail Mary.  However, as a 5.5 point opening favorite, Arkansas only needed their one-touch down margin to cover. They got it.

LSU not only managed to cover on the road, but they did it in typical Mad Hatter style with the now patented “over-the-shoulder-bounce-pass fake field goal play.”  The Model correctly predicted a higher scoring game than Vegas did, and LSU’s offense did just enough to win.

Vanderbilt is no stranger to 4-touchdown lines, but the Commodores took full advantage of being a rare Vegas favorite,  punishing Eastern Michigan 52-6.  Vandy rolled up 558 yards of total offense, allowing only 209 in a game that is likely their last win of the season.

How bad is Tennessee?  Not only could they not cover the 11-point spread, but they were down 17 points by the end of the first quarter.   Three turnovers to Georgia and only 269 yards of offense – that does not get it done in the SEC.  Good news for Tennessee though: despite being a “projected” 2-6 heading into week 9, they’ll still likely be favored against Memphis on 11/6.

Auburn failed to win by the 18-point margin The Model predicted and the Tigers failed to cover the closing line as a 6-point favorite as well.  I hate to blame the officials for making bad calls that lead to Kentucky scoring drives, so I’ll blame the guy who paints the sidelines white for not making it clear enough what exactly is “in bounds.”  To Kentucky’s credit, they exploited Auburn’s weaknesses and almost came away with a win.  They’ll have to settle for a cover.

Alabama’s loss at South Carolina was unexpected to say the least.  The Gamecocks repeatedly sacked Greg “Only One Loss Since 8th Grade” McElroy, but the big story of the night was how South Carolina managed to shut down Ingram and Richardson. Oh, and how they kept Garcia from mental collapse.  I can’t imagine this game turning out the same way if they played again, but South Carolina won’t have to worry about that scenario till December.

I have revised my total points model.  It now takes into account more of the same “per minute” metrics that the margin of victory model does.  This change won’t affect who gets picked to win or by how much (all of that comes from the margin of victory model).  It’ll simply give us a more accurate prediction of the total points associated with each game, which should result in more accurate score predictions.  I’m also providing predictions for all other (non-SEC) games this week, per the request of all the gamblers out there.

A quick review of The Model: I’ve grouped each of the 39 variables into one of seven effects:

The following predictions make use of dozens of carefully selected measures used to describe both the margin of victory and the total points we’re likely to observe in a given game.  If one was so inclined, he could use my predictions to place bets.  Last week, The Model went 31-23 in all games, and 3-4 in SEC matchups.  Through the first six weeks of games, this newly revised model is 159-126 against the spread in all lined games and 25-20 against the spread in games involving SEC teams.   Just a reminder, the margin of victory is calculated by summing the total “effects” listed above in the charts below.

Georgia finally got its offense in gear last weekend and capitalized on three Tennessee turnovers to win, 41-14.  But Vanderbilt, brimming with confidence after a 46-point victory last week, should be able to put up a bit of a fight. They now averages 350 yards of offense per game heading into this matchup after rolling up 550+ yards last week against Eastern Michigan.  The Commodores also raised their average points per game from 18 to 25 after last week’s win, but look for Vandy to regress a bit this week against Georgia and the SEC’s #5 total defense, which is allowing only 315 yards per game.   Georgia’s freshman quarterback Aaron Murray has steadily improved these last few weeks, so look for a good matchup as he faces off against Vanderbilt, #2 in the SEC in pass defense.  If Vanderbilt can get some pressure on Murray, they could hang around until the 4th quarter.  Look for Vanderbilt to cover as 16-point road underdogs.  Personally, I suspect Georgia is going to pound Vanderbilt this weekend, which is why this is my “Not A Lock” game of the week.   Prediction:  Georgia 30 – Vanderbilt 17. 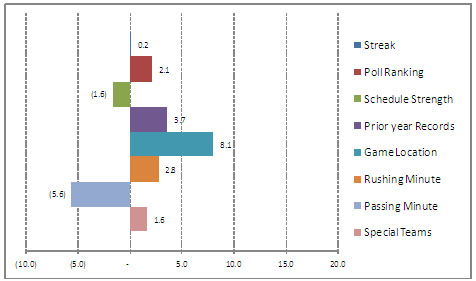 Everyone’s looking for a reason to be optimistic about Auburn’s chances against an Arkansas team that always seems to have Auburn’s number.

The Model is giving you that reason.

With the exception of a quarter here or there, Auburn’s offense this season has seemed unstoppable.  Auburn has shown it can win close games against BCS opponents, and can do so with a relatively balanced attack when needed.  Auburn is #1 in the SEC in rushing offense (276 yards/game) and also leads the conference in passing efficiency.  Auburn’s rushing defense has been solid all season long and, with the exception of the Kentucky game, the line has been blowing up plays and taking down quarterbacks with relative ease.  The Model concedes the fact that Arkansas (the nation’s third best passing offense) is going to hang some very big numbers on Auburn’s #91 ranked pass defense.  That said, all it will take is a few key stops in the first half for Auburn to shatter Ryan Mallett’s confidence.  Arkansas, unlike Auburn, has not shown up in the 2nd half of most games.  Look for Auburn to slow things down and start running out the clock early in the 4th quarter.  Auburn wins big and covers in my model’s “Lock of the Week”:  Auburn 35 – Arkansas 24. 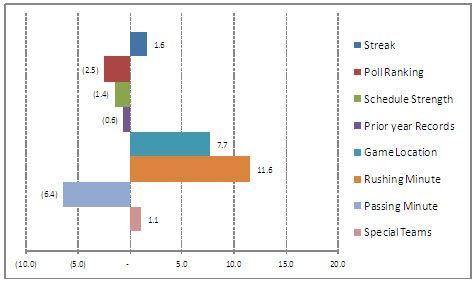 South Carolina looks to avoid a letdown as they face a Kentucky team looking for its first SEC win.  Last week Auburn exploited Kentucky’s rush defense to the tune of 311 yards, and the Wildcats may need to stack the box to slow SEC freshman back Marcus Lattimore and a suddenly competent quarterback Stephen Garcia.  Look for the Gamecocks (now #2 nationally in sacks after getting to Alabama’s McElroy 7 times last week) to get more pressure on Kentucky quarterback Mike Hartline who’s been quietly efficient all season long leading the SEC’s #2 passing attack.   This game could end up much closer if Kentucky is able to exploit South Carolina’s biggest weakness, their passing defense.  South Carolina is last in the SEC is yards allowed through the air at 255 per game, and is second to last in the conference in passing efficiency defense.  That said, The Model is banking on another great game from Garcia and she suggests South Carolina should easily cover as 5-point road favorites.  This game was almost my “Lock of the Week”, but I got burned last week betting against the Wildcats.  Prediction:  South Carolina 33 – Kentucky 21. 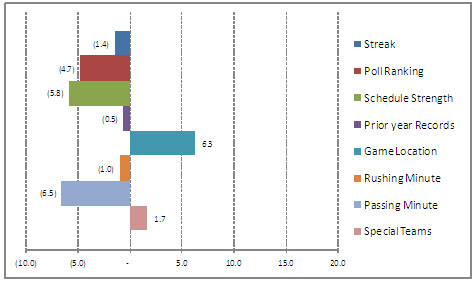 Two weeks ago, Vegas would have had Florida at 21-point favorites.  Last week, Vegas would have put Florida as a 15-point favorite.  With two straight losses, the Gators are now only 7-point home favorites against a Mississippi State team with a 3-0 non-conference record and a 1-2 conference record.  This could be a relatively low scoring game with Mississippi State allowing 17.5 points per game and Florida allowing 20 points per game.  Special teams could make all the difference.  Florida has the nation’s #2 punting unit and the SEC’s #1 kickoff return squad.  Mississippi State doesn’t rank higher than #3 in the conference in any statistical category, but sits right in the middle in most.  This is not the same Bulldog team that gave the game away on turnovers to LSU in Week 3.  This Mississippi State team is balanced offensively and defensively and should keep things close with Florida all game long.  The Gators have a lot more at stake in this game than the Bulldogs, however, and look for them to bounce back this week at home with a big defensive effort.  Prediction:  Florida 25 – Mississippi St. 17. 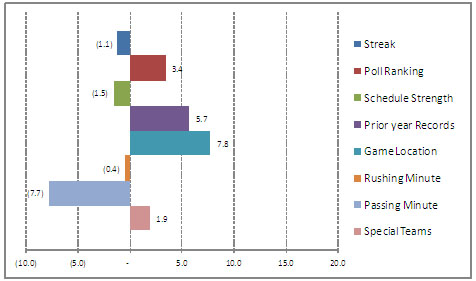 Could Alabama possibly be overrated?  Three touchdowns is a big line against an Ole Miss team that scored 97 points in its last two games.  The Model believes Ole Miss is going to keep this game a little closer than do the oddsmakers in Vegas.  The Model, in theory, isn’t prone to the overreaction or bandwagoning of the betting public, but sure enough, she sees a streaking Rebel team covering against a once-untouchable Alabama squad.  Alabama’s biggest weakness season to date has been their defensive line’s lack of push and pressure.  The Tide is 12th in the SEC in both Sacks (1 per game) and Tackles for Loss (4.33 per game), which doesn’t bode well when facing the mobile Jeremiah Masoli, who seems to have turned the corner in his last two weeks, throwing 5 TDs to just 1 pick.  Between Masoli, Brandon Bolden and Enrique Davis, Ole Miss has the SEC’s #2 rushing attack at 232 yards per game.  How well Ole Miss can move the ball on the ground against an Alabama rushing defense allowing only 104 yards per game will go a long way toward determining how long the Rebels can hang around.  If Alabama can keep Greg “Not My Fault We Lost Last Week” McElroy protected, look for him to shred the Rebel’s #11 SEC pass defense.    Prediction:  Alabama 36 – Mississippi 23. 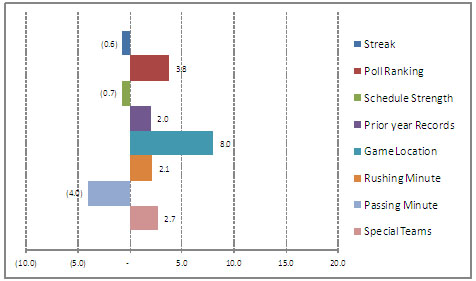 New this week, I am including my model’s predicted outcome for all games between FBS opponents.  I’ve highlighted games if either team is currently ranked in the AP Top 25.  The Model is predicting that the only teams in the AP Top 25 to lose this week will be Arkansas, Missouri, and Wisconsin.

Mac Mirabile is a 2002 graduate of Auburn’s economics and journalism departments. During his time at Auburn, he was a copy and photo editor with The Auburn Plainsman. He has a master’s in economics from UNC-Chapel Hill and has written numerous academic publications on college football, the NFL, and gambling markets. His previous columns can be found here. He can be reached at [email protected]