Leaves of Turf is a game-by-game, season-long series of football verse by TWER poet lAUreate Amorak Huey. His first poem can be found here, his second here, his third here, his fourth here, his fifth here. This week, he turns to Samuel Taylor Coleridge, who coined the term “suspension of disbelief,” a handy phrase indeed when discussing Kentucky football. 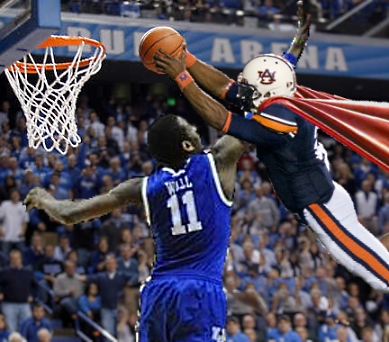 Or, a vision of Auburn revenge.

In Lexington did Adolph Rupp
A basketball school decree:
Where hoops were sacred and took up
Budgets, filled seats with butts.
This roundball thinking might make sense
In some other conference,
But not here, not in the SEC –
Where stadiums blossom ’round the South,
Where football coaches hold the clout,
Where snap counts and drumlines ring out
A season’s soundtrack in the autumn air
Not shoes squeaking on some gym floor.

Oh, sure, Bear coached these Cats,
And so did Curry, as if we Auburn fans need
One more reason to be irritated at
Last season’s ridiculous defeat.
It tweaked our sense of right and wrong,
Not to mention sent our season down a long
And ugly second half. But oh! Our new quarterback
Is a dancing and glorious vision in blue
And orange! He haunts free safeties’ dreams,
He throws, he runs, he brings a gleam
To Malzahn’s eye. UK, beware of No. 2!
But Newton’s not our only weapon with a knack

For changing games. Meet Fairley, Bynes and Dyer.
Watch out for Adams, Ziemba, Blake.
I could go on listing names of guys I like –
Those who play with that Auburn fire.
Instead I’ll tell you what I predict:
Auburn wins – and it won’t be close.
Tigers grab this game by the nose,
Leave those Wildcats with wounds to lick,
Their fans longing for Midnight Madness.
Fine, we don’t have your hoops success,
But this week we’ll have Cam’s terrific smile,
And a 6-0 start – and that will last us for a while.