The new football season is officially under way, and with it, as always, a slew of uniform tweaks, new marketing campaigns, and fresh attempts at brand development.

Some are subtle. Others, not so much. But while the entire coaching staff remained the same this season, everyone in attendance Saturday knows that there have been some changes around here.

The Intro Video: We’ll begin, of course, with the major hot button issue of the moment; the new intro video.

Now, we all knew when the intro song was put up for fan vote months ago that A.) some (see: most) people would be unhappy with the results because they voted for another song, and B.) any fan vote is automatically guaranteed to get you the worst possible result. We also knew that, for whatever reason, people were going to care twice as much about the intro video than the videos played before and after it.

Well, as everyone in Jordan-Hare witnessed Saturday, Murphy’s Law of Democratic Masses* struck once again, as “All I Do Is Win” won (ironically) the fan vote, over perennial favorite “Ladies and Gentlemen”, incumbent “Family Reunion”, perfect shoe-ins “Welcome to the Jungle” and “Eye of the Tiger”, that Coheed and Cambria hit, and a song written specifically for the occasion, “Tiger Walk”.

My perspective on this might be a little bit different than some folks; I’m personally a huge fan of rap. But as you likely know by now, my cup of tea isn’t safe for work, let alone a football game — you know… less about night clubs and Patron and more about firearms and forty ounces. That’s not to say that one of those kinds of songs should have been the song, just that “All I Do Is Win” is terrible.

I’m sure most fans of the genre will agree. The song’s performing artists: T-Pain? Don’t get me started. Ludacris? Don’t get me started. Rick Ross? Has the fakest background since Vanilla Ice. Snoop Dogg? Behind only Flava Flav as the hardest sell out in the history of rap, and besides I’m more of a Ruthless Records kind of guy anyway.

So the question becomes: who exactly voted for this song anyway? I have no idea. It wasn’t my crowd. And it certainly wasn’t the “Get off my lawn” crowd, either.

Who knows, maybe somebody out there actually does enjoy it. If they’re into T-Pain, and, you know, Britney Spears.

Personally, I think that those who voted for it should be shot and have their student tickets revoked, in that order. That’s just me.

As for the video itself — it just goes to show how stupid the idea of a fan vote was in the first place. As anyone who has ever played around with Windows Movie Maker for more than two seconds will tell you, it’s pretty much impossible for a videographer to make a decent video when they are handcuffed by having to use a song that doesn’t conform to their vision. This clearly shows in the video. (The onside kick? Seriously? And words can’t describe how super lame the brown-nosing to fans at the 0:53 mark is.)

But maybe someone will figure it out and we can pull the old switcheroo again, and change it to something else. Anything else. (Hit it, Auburner.)

The OTHER Videos: With all that said, the other videos are incredible. The band video is once again far more awesome than it has any right to be (not that I’m complaining), and the kickoff video — the one that the players see, and the opposing players see — is once again the best out of the bunch, as it should be.

The “Tiger Walk” mix at the slot during warm-ups was great, and so was the surprising little “Enter Sandman” video that was played later in the game. (Neither of these are online, for some reason.)

The Uniform: Though the off-season fears of fans voting for the worst song possible came true, the other potential change that had some up in arms in the spring didn’t come to fruition.

The “experimental” larger helmet stickers that were worn at A-Day turned out to be just that — experiments — as the powers that be decided to stick with the standard sticker size. Definitely the right call. 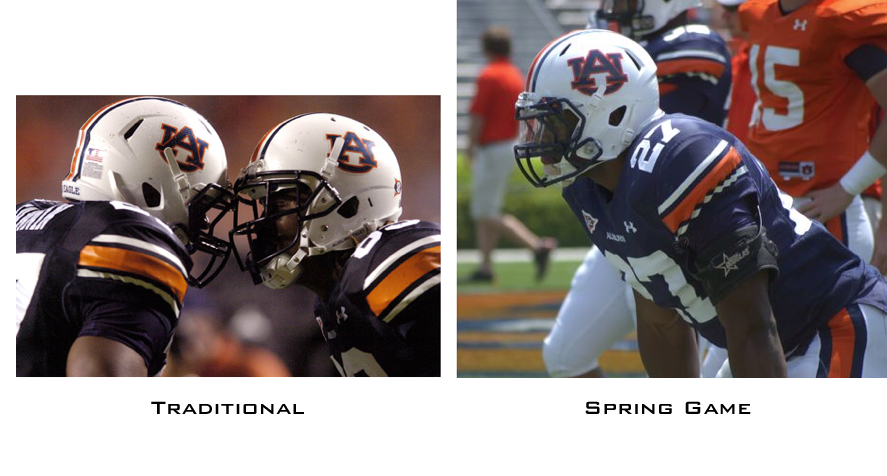 But there was one major uniform change: the team has gone from wearing black shoes and black socks back to wearing the classic white shoes and white socks. The change was actually made for the Outback Bowl, and carried over to the 2010 season.

What’s interesting, at least for me personally, is that I didn’t really like the white socks and white shoes combo when watching the Outback Bowl on TV, but it looked just gorgeous against Arkansas State in person.

The difference? Call me crazy, but I think the whole set is make-or-break over one, minor, little tweak: the trim on the white shoes was changed from orange to dark blue.

The verdict? At the end of the day, I think Saturday’s version looks the best out of all of them, which is a very good thing.

But not all things changed for the better.

The Field: For years and years and years, Pat Dye Field at Jordan-Hare Stadium was marked at midfield by a blue AU logo. Last year, the logo was changed to orange, and it looked pretty good.

But on Saturday, it was back to blue… but different. This year’s version is taller and wider (stretching past the 45-yard-lines for the first time ever), and is without white on the interior.

I’m pretty sure no one wants to see the big white dot of old, but white makes up two-thirds of our home uniforms, and all of our away uniforms, does it not? I’m not sure why they went out of their way to buck tradition and avoid it this year, but whatever the reason, it just doesn’t look as good.

You’ll also notice that SEC logo at the 25 yard line on this year’s field is orange and blue, rather than its traditional blue, white, and yellow, as seen last year. Once again, doesn’t look as good, and, for whatever reason, the logos switched to where, when looking from the TV side, the SEC logo on the left has moved from near to far and the one on right has moved from far to near.

The Program: And then we have last Saturday’s Auburn Football Illustrated.

The cover, as you can see, is a pictorial masterpiece, every inch answering important questions long dormant. I think.

Going from left to right — since I wouldn’t know where else to start — we see Zac Etheridge, tossing aside his neck brace just as Saturday night he tossed aside the doubts and the questions, and all that has for the last nine months forced its way between him and the game that he truly loves. He has triumphed over disaster, and here he stands, in uniform, prepared for anything and everything, as he has already faced and conquered the greatest of challenges that would have easily broken a mere mortal.

Next we have Airon Savage. Who is standing. With a football. Being resilient. And stuff.

Finally we have Mike McNeil, another safety that battled a significant injury to return to the field. No, wait, that’s not him. No, that would make far too much sense.

It’s Demond Washington. Breaking out of a straight jacket.

I’m not sure. Maybe I should have bought the program. But five dollars is a lot for a roster I have already memorized. (See, mom, those hours upon hours of studying Auburn football wasn’t useless after all. It just saved me five bucks.)

The only logical explanation is that Mississippi Gulf Coast Community College, where Demond transferred from, is actually a front for an insane asylum, and that the football team (the “Bulldogs”) is some sort of real life mental ward version of The Longest Yard.

Am I the only one that thinks the campus looks a little… enclosed?

(Further proof: MGCCC gave us Eltoro Freeman. And this guy.)

See you next week. Beat Cowbell U.

*Totally just made that up.