— That, folks, is what this offense is supposed to look like. 492 total yards, 35 points, 334 rushing yards against what had been one of the best rush defenses in the country through three games. Gash after gash after gash. One punt in the second half, and only at the very end of the game. Against that kind of competition, that’s some pretty freaking incredible production. Never leave us, Gus.

— Mmmmmm, the defense we wanted to see. I don’t think these guys are good enough to just shut down an offense with guys like Lattimore and Jeffery (Jeffery, holy crap) when they’re executing the way the ‘Cocks (and Garcia in particular) were. But they remain perfectly capable of making the sort of big plays that can make up for a lot of yielded yardage, and tonight–finally–they did. 4 turnovers in four possessions to end the game is going to give your team a damn good chance of victory.

— What were the odds coming in that the special teams’ biggest problem on the night was going to be Wes Byrum?

— Aaaaaahhhhh that touchdown drive after the second Garcia fumble–where they passed the ball once, and that once was the swing to Blake for the touchdown (and by the way, how sweet is Emory Blake?)–should be able to distilled into a substance I can inject directly into my veins.

— Cam Newton  … I mean, what can you say? 334 total yards, five touchdowns, zero turnovers this week. Zero turnovers. If he stays intact and keeps playing like this, Auburn’s going to be able to do what they did tonight to an awful lot of teams.

— Only one crippling offensive penalty in the red zone. That almost qualifies as progress. Even if I may have sworn out a blood contract on any lineman that jumped down there at the goal line.

— THE SWEDE KILLA IS IN EFFECT, Y’ALL

— Does anyone think going to Shaw for those last two possessions was the right move? Anyone? Unless Garcia had his bell rung, that was just begging for, well, consecutive interceptions.

— Auburn is 2-0 in the SEC and despite the fact that both of those games came down to the final possession, Auburn has outgained their opponents by more than 100 yards in each. That’s a damn, damn good sign.

And overall, Auburn is as good as 5-0 for a second straight year. There’s a ton more work to do. But given the hurdles Auburn’s already cleared, that’s a hell of a start.

— What’s so infuriating about that half is that Auburn is answering the major questions; the passing game is mostly productive, Lattimore has been largely held in check, Auburn’s offense hasn’t left the D on the field too long (they’ve punted just once on five possessions) … and it doesn’t matter, because Fannin and Dyer left the ball on the turf.

— OK, so it’s Roof’s turn to get flambeed, right? Honestly, it’s mostly deserved; we knew Carolina would run a ton of screens and draws, and what happens? Those screens and draws torch us. And check the conversion stuff below. But know that Carolina scored two touchdowns without even having to convert a third down. And Auburn has yet to force a three-and-out. That’s not good.

— A comprehensive list of the 3rd downs Carolina converted in the first half: 12 yards, 11 yards, 8 yards, 5 yards. 2nd downs that were eventually converted:  11, 10, 11, 10, 12. Auburn is tremendous on first down. And then the opponent looks to screens and draws, and our linebackers and secondary aren’t good enough to earn a stop. Sigh.

— Damn, Cam Newton. Not just 97 yards rushing and two TDs, but 7/9 for 73 yards–8.1 an attempt–with both of those misses catchable balls. Hell of a performance so far.

— Jeremy sent this to me and I meant to have it up in pregame, but by waiting ’til now, I get to note how super-ironic it is, give nthat Burns did not actually, in fact, catch this same pass in the game: 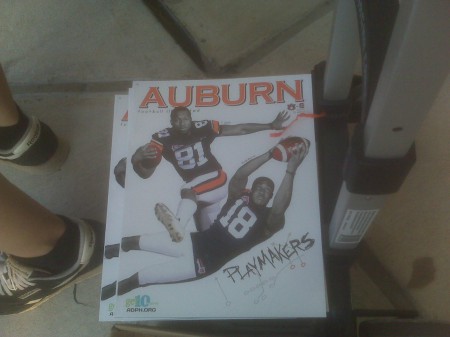 — How ginormous was that final touchdown drive? Not only the 7 points, but that it took long enough to prevent any immediate answer by Carolina … and now Auburn gets the ball to start the half.

PREGAME, 6:00: Update on starters: John Sullen will get the first call at right tackle, and in something of a surprise, Mario Fannin is listed as the starting tailback. I doubt that will end up meaning a whole heck of a lot, but it is a sign that Fannin will be involved in some fashion. (Wheel route city!) Oh, and as for Josh Bynes, apparently there was a rumor he was hurt. He’s not.

As for Alabama: Ryan Mallett is still Ryan Mallett. He giveth, and he taketh away like no other quarterback in the SEC.

UPDATE: Just kidding: Brandon Mosley is actually your starting right tackle, Dyer is the starting tailback, and–now here’s a surprise–Nosa Eguae is starting in Michael Goggans’ place at defensive end. Goggans was better the last two weeks than he was in Week 1, but I guess he wasn’t better enough for Rocker.

That’s all for now on this end; unless we get some sort of revelation between now and kickoff, the next update will be at halftime.

PREGAME, 4:15: So, how ’bout them Hogs? Obviously McElroy’s brainlocks have helped, but 300 yards in the first half is 300 yards. There wasn’t anything fluky about that half.

The pregame posts from the beat writers have started going up. As has been the case for the last few weeks, the big news so far is:  it’s dreadfully hot. I have to admit that as badly as I want to get back to Alabama one of these days, hearing that it’s still 92 degrees on Sept. 25 isn’t, um, an enticement.

This just in: Tennessee is really, really bad. It’s one thing to let UAB hang around; it’s another to get flat dominated, 544 yards to 287, and win because UAB’s kicker had a J**n V****n day.

PREGAME, 1:10 p.m.: Not much going on in these noon games, not that we couldn’t have foretold that just by looking at the schedule. I had my hopes for UAB, and of course the Blazers are looking good in the box score, having outgained Tennessee by more than 60 yards. Too bad they’ve been outscored by 16.

So I’ve found some Auburn stuff to recommend: Track ’em has an insightful Q&A with Garnet and Black Attack; the discussion of the ‘Cocks expectations vis a vis Spurrier and his eventual retirement is good stuff. Andy Bitter’s weekly breakdowns are always worth a read; I hadn’t realized Gilmroe had that much success as a punt returner last year. Evan Woodbery notes that Mario Fannin’s return could make a big difference in Auburn finally diversifying the passing game; he’s very right. And lastly, if you’ve got ESPN Insider, their Scouts Inc. breakdown of the game is very well done; they predict Auburn’s defense to wear down after last week’s slugfest and the ‘Cocks to emerge victorious. That might be troubling if they hadn’t also predicted Auburn to lose to Mississippi St.

Lastly, man, I don’t get announcers sometimes. The Va. Tech-Boston College broadcast puts up the BC QB’s numbers: 10-of-22, 120ish yards, one pick (in the end zone to negate a long drive), 0 TDs. Announcer: “Shinski’s having a pretty good day.” Yes, a completion rate lower than 50 percent, less than 6 yards an attempt, one critical interception and no touchdowns–he’s doin’ swell. What would it take for him to actually be having a bad day?

PREGAME, 11:10 a.m.: I still haven’t made up my mind if it’s cool to be on Mountain time on Saturdays or not. On the plus side, as soon as I wake up, there’s football to watch. On the downside, that means I have to wake up by 10 a.m. on a Saturday. Six in one, half-dozen in the other.

Spurrier was just interviewed by Holly Rowe (love you, Holly!) and it sounds like there’s been a ton of unfortunate real-life incidents for the team this week. It’s a shame, and condolences to all the ‘Cocks who have been affected. But if there’s going to be any impact on the football field, it’s likely to be in Auburn’s favor.

UAB (+14) vs. Tennessee: Blazers may have found something with their backup QB last week and this seems like the sort of “breather” game that Vols could flounder in.

Arkansas (+7) vs. Alabama: Not sure the Hogs will win–I kind of think Alabama gets the ball back up 3 with like 6 minutes to go and runs the entire clock out–but I think they’ll keep it close enough to cover the full touchdown at home.

Georgia (PK) vs. Mississippi St.: Two desperate teams. But State’s quarterbacks have been so poor I don’t see them getting enough balance to beat the Dawgs.

Kentucky (+16) vs. Florida: ‘Cats have to stop crapping the bed against Gators one of these years, right?

West Virginia (+7) vs. LSU: You know what I think of LSU. ‘Eers have great record vs. SEC, too. If Geno Smith will just not turn the ball over …

OK, so looking back, I took the points every time, didn’t I? Yikes, that’s probably not right. Oh well.

I’ll be back after a while with some pregame reading material. But for now, it’s coffee time.