Had to get the Preview up first–that’s the important post today–but did want to offer a few more observations after a close rewatch of the Arkansas St. game. Usually this post will include my charting numbers, but with the short week, I didn’t feel like I had the time to break things down quite that finely. Sorry. But here’s what I’ve got:

— As regards the defense, I don’t have anything to tell you you probably don’t already know. Coverage was Charmin-soft as a rule. Tackling could have been much better. Zac Etheridge had a particularly poor game. One of our two starting defensive ends who is not Antoine Carter was invisible, again. (Unless you think recording more offsides penalties than solo tackles and sacks and TFLs combined, 1 to 0, is “visible.”) No turnovers forced, though to his credit Ryan Aplin only gave Auburn the one real chance at a pick (the juggled out route that Bell couldn’t quite corral).

But one problem I haven’t seen cited elsewhere is that Auburn’s corners have to fight a littler harder to get through their blocks; at his size, Neiko Thorpe shouldn’t just be stoned by a random ASU wide receiver, but this happened a couple of times, and the result was big gains on simple swings.

— Another issue: Eltoro Freeman just isn’t the right sort of linebacker for this matchup, at least not yet. When he succeeded last year, it was against more straightforward attacks that didn’t do as much of this fancy dink-and-dunk spread stuff … teams like LSU, Ole Miss, Georgia until he got hurt. His one really productive drive came after the big Fairley sack down inside the 5, when ASU first botched a zone read to no one, leaving the QB to just try and plunge towards the line–Freeman was there in a heartbeat. A play later, he did the same thing when ASU tried a draw. When his aggressiveness is focused and he can watch the play developing, he’s still a killer.

But when that aggressiveness is used against him–and more than once he was staring into the backfield as ASU threw into a flat he was too late arriving to–he’s kind of a liability. I’m still not sure why he wasn’t pulled for a nickelback more often. As Chizik said: he was “OK” against ASU (6 tackles, as many as Bynes), and not a lot more. But that doesn’t mean he can’t be a stunningly useful player against the right team. (Is MSU that team? That the Bulldogs like to keep the ball on the ground much more than ASU is encouraging, but the emergence of Russell and the presence of Bumphis/Heavens means Mullen might find a way to exploit him. We’ll see. But I do hope Stevens returns soon.)

— The good news, linebacking-wise, is that Bates was pretty much the tackling dervish we thought he’d be. You don’t lead the team in stops by accident.

— As mentioned in the recap, the offensive lineman who seemed like the biggest sore spot wasn’t A.J. Greene but Mike Berry. Maybe he should grow out that ‘fro we heard about.

But even if there was a handful of breakdowns along the line, you couldn’t ask for a whole lot more from them. Aside from the single blitz on the goal line, Newton wasn’t even touched in pass protection; the dump-down to Fannin for the walk-in TD had multiple fakes at the start the play, multiple reads for Newton to go through, and by the time Newton got to Fannin he still had another few seconds to throw. Obviously Pernell McPhee will provide a much stiffer challenge, but that’s good no matter who you’re facing.

As for the run blocking, obviously Cam Newton’s heroics help the numbers look even better than they probably are. But Dyer and McCalebb averaged 7.6 yards per-carry, too. I don’t think I can add a whole lot to that.

— Freshman impressions? Again, not that I’m the first person to say this, but Whitaker is a man’s man, repeatedly pushing his blocker back in his limited snaps; he didn’t record a tackle, but he and Carter (also very active) look like they’re going to be permanent members of the rotation for as long as they’re on the Plains.

Elsewhere, the news wasn’t quite as good: Corey Lemonier seemed to have a good motor but also got stoned a couple of times; Jessel Curry seemed just a hair slow to react, as you’d expect him to be in his first game, and you’ll recall Aplin beating him in the open field; Sanders was obviously a demon on special teams but didn’t have an impact at defensive end in, again, limited snaps.

— Want more evidence Malzahn was holding back? There weren’t any swing passes. Think about it: how many do you remember? None. We had the screen to Fannin at the end of the first half, the check-down to Dyer, and that failed bizarro last-second option-swing that Newton threw at Zachery’s feet. The odds that Malzahn has simply abandoned one of last year’s more consistent plays–one with better targets this year in Blake, Burns, Reed, etc.–are, I think, very low.

Time to see why a running quarterback–particularly one as comfortable with the ball as Cam Newton–is such a weapon in an offense like this. It’s 2nd-and-7 in the fourth quarter, the game more-or-less decided, but here’s how Auburn and Arkansas St. lined up: 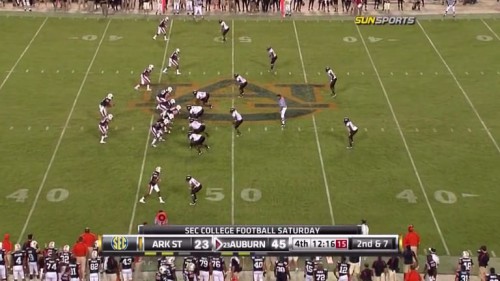 What’s ASU doing here? They’re showing man-cover-2, with a pair of safeties deep and one-on-one coverage on Auburn’s four receivers. The problem is that it leaves five guys in the box to take on seven Auburn players in the run game: the five linemen, McCalebb, and Newton. 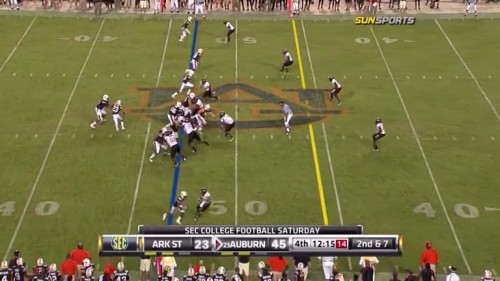 Ah: the defender lined up in the left slot is blitzing, leaving coverage responsibility on Emory Blake to the safety. This would be a potentially serviceable run defense call if Newton wasn’t Newton; you’d have six-vs.-six with one of those a potentially unblocked blitzer. But of course, Newton isn’t Newton, and it’s seven-on-six instead. You can see him making the read for the option: with no one else in the box, a five-on-five situation in front of him, and the blitzer likely to be taken out of the play on McCalebb duty, the right decision here is to keep … 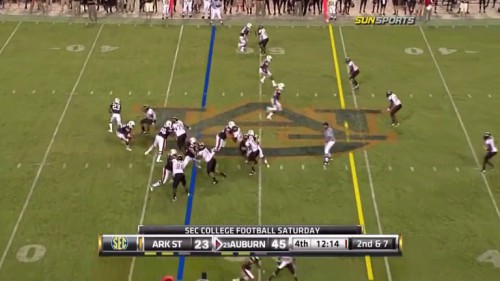 … which he has, with the McCalebb fake doing just enough to throw the blitzer off balance. The new problem: Berry has been pushed into the backfield by the ASU DT. The good news is that if Newton can get past that guy, the other four players in the box are all getting stoned by the Auburn line. So can he? 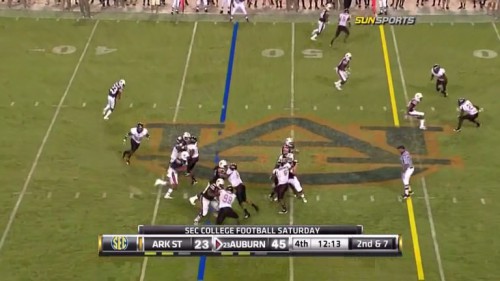 Of course he can (with a little help from a minor hold from Berry). Lots of space in the middle of the field; if Newton can find that space and the receivers can make blocks (asking a lot, but still) this could be a huge gain. 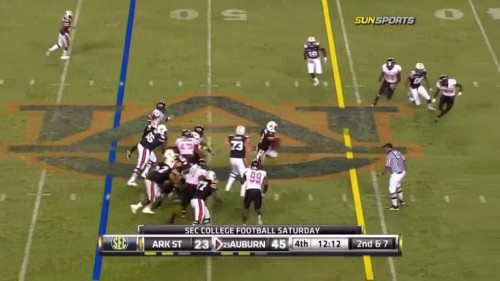 There’s the space, but a TD is unlikely; the safeties have reacted just a little too quickly to get blocks on them. Not that we’re complaining by this stage. (By the by, notice that Ziemba has blocked his man so firmly into the mess at the LOS he’s just standing around by this point.) 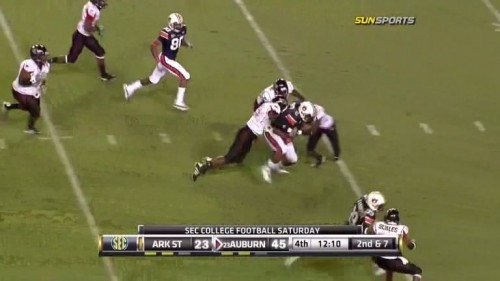 Eventually the safeties and the backside defensive end (doing a tremendous job of tracking back) bring him down, but not before he picks up 19 yards.

Again, from the Auburn perspective, this kind of play isn’t even an option with a Chris Todd at quarterback; either McCalebb takes the handoff and gets nailed by the blitzer, or Todd keeps and gets swallowed either by tackle or the general mess.

But with a Newton handling things, it’s ASU who is forced to pick their poison. Leave even one safety back, and Auburn has a blocker (or decoy) for every defender capable of stopping the run; bring that safety up, and now it’s cover zero and one pass over the top could equal six points. As long as Cam Newton is Auburn’s quarterback (and proves himself capable of operating the passing game), there simply won’t be a good answer for opposing defensive coordinators.