Catching up with the newsbits from the last couple of days on the Auburn beat. Reporter roll call: Andy Bitter, Jay Tate, Charles Goldberg, Andrew Gribble. The information is theirs, the analysis mine, as always. Onwards:

— Lee Ziemba practiced yesterday, and by all accounts will be ready to go on Saturday. So maybe there was something positive about going to Starkville on a Thursday: now he’s got another couple of extra days to get ready. Everybody’s thrilled by the news, except maybe Will Herring, whose starts record Ziemba should still be on track to break. (Actually, I suspect Herring either does not care or would be happy Ziemba is healthy enough to keep playing.)

— This is more me reading between the lines (and maybe even a dash of wishful thinking) than anything Chizik said directly, but between the “Mike did a great job at the end of the game” and “our tailbacks should be our leading rushers” and “Hell no I don’t want Newton carrying the ball 20 damn times a game” (that last one’s something of a paraphrase), I’m betting we see Mike Dyer take over a much larger share of the workload this week. You read this, and I don’t think you can feel any other way.

This is a good thing, of course; Newton can’t keep banging away as often as he has, and while I’d love to see Fannin break out, Dyer’s just been better to date. It’s time, and I think the coaches know it. If he finishes with any fewer than 15 carries Saturday, I’ll, uh, I’ll admit I was way wrong.

— It’s a surprise to me after Newton took a lot more legitimate shots from the Bulldogs, but he said he was more sore after Week 1. Good news, I suppose.

— Color me not entirely concerned that Josh Bynes played the entire game Thursday. Yeah, it would have been great if he’d gotten a blow, but we all know the dropoff from Bynes to Harris Gaston is, well, dramatic. In the sort of game where one blown tackle or assignment could equal DEATH, I don’t blame Roof at all for telling Byens he can rest against UL-Monroe and Chattanooga and some other game where one play won’t decide things. Besides: State took 68 snaps and Arkansas St. 84. Unless the backup LBs were in on even more plays than I thought, Bynes probably played just as often against the Red Wolves, give or take five snaps or so.

— Interesting that Chizik mentioned John Sullen as a possible replacement for Ziemba, even after Mosley shone the other night. Clearly, Sullen is a kid the coaches have a serious soft spot for.

— That Mario Fannin is in “the same status” as Ziemba is encouraging, since Lord knows we’re going to need him as a receiver, H-back running threat, pass-blocker, etc., even if things don’t work out at tailback.

— Nick Fairley’s your SEC Defensive Player of the Week. If he hadn’t have been, I’d have been happy to lead the riot at SEC HQ.

— Chizik on Trovon Reed: “We’re working in that direction. We really want that to happen. We would like that to happen, yes.” That’s still not the same as “he’s going to play,” is it? Sigh. 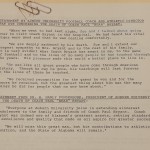