Two weeks ago, author Michael Weinreb told us, among other things, that Bo Jackson was indeed a bigger deal at the height of his popularity than Michael Jordan was the height of his. This week, Ben Bartley reviews the book that proves it (and other things) – Bigger Than the Game: Bo, Boz, the Punky QB, and How the 80’s Created the Modern Athlete. Ben’s essay on the significance of innovation to football as envisioned by Weinreb’s pal Chuck Klosterman can be found here.

They called it the Reagan Revolution, and I’ll accept that, but for me it always seemed like the Great Rediscovery: a rediscovery of our values and our common sense. —Ronald Reagan pg. 272

The premise of Bigger Than the Game seems too perfect. Ronald Reagan’s America*, with its “War on Drugs” and its “Just Say No” and its return to core American values and the reawakening of the American Dream, awoke the sleeping beast that was American sport. Instead of sports being a representation of hard work and all that’s supposedly good within our culture, as outlined by our ancestors, it became, in the ’80s, a gaggle of narcissistic uber-capitalists gone wild. More than any other decade previous, the ’80s deified the bold and rebellious sports superstar.

We understood that the stodgy ethic of previous decades, the notion of sports being guided by militaristic principles, of the team’s achievements blotting out all traces of individualism, had already withered away. ESPN just gave the modern age its voice. —pg. 37

On the surface, this thesis is too broad, too hard to imagine plausibility. But then Michael Weinreb introduces his colorful cast of characters. There’s “the punky QB,” Jim McMahon: “His overarching philosophy of human existence was that he didn’t really give a damn what anyone thought; even his parents still pissed him off.” (pg. 9)

The choice of Auburn fit with Bo’s tendency toward contrarianism. It wasn’t the obvious destination for a young man who grew up in Alabama in the era of the Bear, but it was Bo’s choice, and he would make the Bear regret even the implication that Bo might not be good enough to play offense, or that he wasn’t good enough to play right away.** —pg. 44

There’s Len Bias and his death from cocaine use which terrified a nation of children. There’s The Boz, who “was perhaps the most self-aware of all these media creations sprouting up in locker rooms across America, an academic All-American with a grade-point average well above 3.0.” (pg. 123) There’s the Fridge and the 1985 Bears. There’s the concordant rise of Michael Jordan and Nike. There’s the emergence of ESPN. There’s “the U.”

These characters make reading Bigger Than the Game worthwhile. They actually outshine Weinreb’s central argument, which is a credit to Weinreb, as he spent no-doubt countless hours and days compiling and interviewing numerous former athletes, coaches and hanger-ons to find such enlightening and hilarious anecdotes that by page 285 have you nodding your head and saying“OK, Mike. I see what you’re saying. Well done.”

(L.T.) did not give a damn about his endorsement value, nor about the antiquated notion of athletes as role models. He fueled himself through his lifestyle, staying up all night and buying cocaine at a house on 133rd Street in Harlem and taking over-the-counter speed to stay awake and shotgunning Scope to jolt himself to life on Sunday mornings. Sometimes he paid a ball boy to lie under the covers during bed check at the hotel the night before a game. 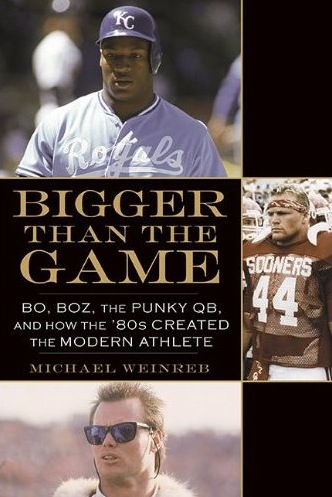 Until recently, I’d never questioned why or how sports had evolved to our present situation. Unlike Weinreb, I did most of my growing in the ’90s. I’ve always had ESPN and Deion Sanders and steroids in baseball. Yearlong coverage of sports minutiae has always been a part of my day-to-day. For better or worse, the monolithic money-maker Sports has become has always, and probably will always, be a part of my life.

Bigger Than the Game isn’t asking why that is, it’s trying to let readers know how—how we got here. It’s about the road, not the destination. Weinreb has left the hand-wringing and broader sociological implications for others to sort.

If you grew up in the ’80s, saw every Bo Knows commercial, remember your exact location when you learned Len Bias died, still occasionally karaoke “The Super Bowl Shuffle” while wearing shades and an Adidas headband, go to wherever books are lent or sold and obtain this book . You are the target audience.

He didn’t tell anyone, but he hadn’t given up on football. He wouldn’t allow himself to give up on football, because this was the way Bo saw it—there were people who settled for whatever came their way, and then there was Bo Jackson. Years later, he spoke of it in terms of fishing: Some men are content to catch one small fish, but when Bo Jackson catches a small fish, he uses it as bait to catch something much larger.

* Warning: If you’re a hardline Reaganite, you probably won’t like Weinreb’s depiction of The Gipper. He is public enemy number one throughout and receives the blunt of the blame (or praise?) for the modern state of sports.

** Footnote from pg. 44: There were rumors—vehemently denied by Bo—that Auburn boosters bought his mother a chain of 7-Eleven stores and Bo himself a forty-thousand-dollar sports car; among Alabama fans, in an era of recruiting improprieties, this became a simple way to explain the snub.

Ben is a student at Auburn University. Most of his time is spent doing as little as possible, eating, and controlling manageable vices. He will one day graduate with a degree in journalism and maybe find a job. Fingers crossed. Write to him at [email protected]. (Did you read his story ‘The Mysterious Auburn Man”? It was reprinted in the winter issue of Auburn Magazine).