A week-by-week preview of Auburn’s 2010 opponents. But since you can find straightforward overviews in a half-dozen magazines and a ton of places across the web, these are a little more … disposable. Light. Cheese-puffy. Previously: Arkansas St., Mississippi St., Clemson, South Carolina.

What their logo tells us about their football team:They’re just going through the motions. Yeah, he’s a Warhawk, but he doesn’t look like a very excited, angry, or particularly dangerous Warhawk, does he? Is this because he knows there’s no such thing as a “warhawk” and then he’s been artificially created in some corporate branding lab to replace ye olde “Indians” moniker at the University Formerly Known as Northeastern Louisiana? Probably. It also helps explain the lightning bolt–yeah, that’s what it is, but it’s such a short, cartoony, non-threatening lightning bolt it’s obvious it’s just there to help the Warhawk, you know, look the part or something.

In short: don’t expect a lot, man. The Warhawk’s got a job to do and he’ll do it, you know, he doesn’t want to get fired and go back down to flipping burgers in I-AA. But he’s not going to go that extra mile or anything. He’s going to make up the numbers in the Sun Belt, get pounded on the road against BCS teams, pick up his paycheck, and go home to grab a couple of cold ones before he gets up and does it all over again next week. It’s a living.

What happened last year: Much as they did in 2007 when visiting Tuscaloosa (admit it, you’re surprised it took me even this long to mention that), ULM got the proverbial wild hair up their rear ends by going on a three-game mid-season winning streak, including wins over both Florida schools and preseason conference co-favorite Arkansas St., that brought them to 4-2. But bowl games really aren’t this program’s thing; they beat only hapless North Texas and Western Kentucky down the stretch, losing four other games (including to equally downtrodden rival Louisiana a.k.a. UL-Lafayette) by a combined 67 points. At 6-6 it wasn’t a losing season, but it wasn’t a winning season either, and ULM stayed home for the holidays once again.

What happened the last time these teams met: Before the season opener for both teams in 2008, Auburn offensive coordinator Tony Franklin told co-starting quarterbacks Chris Tod and Kodi Burns that “he’d never been more proud” of any quarterback he’d ever coached, and their only their shared, equal excellence on the practice field had kept him from making a decision on one or the other as starting quarterback. He apologized to both of them that they’d have to share the position with each other, at least to start with, since both were worthy of holding the job alone. He then apologized a second time, explaining that he’d seen true freshman cornerback Neiko Lipscomb throw a water balloon at a teammate as they left practice the other day, and he thought Lipscomb’s arm looked too impressive not to get him a few snaps here and there in the second half. Franklin explained that he knew it wasn’t fair to the two outstanding quarterbacks he had in front of him, but they had to find out what they had in Lipscomb. Also, Neil Caudle had his arm in a sling, but Franklin felt the best physical therapy for a surgically reconstructed elbow or shoulder or whatever it was was live game action, so he’d be seeing the field at some point too. They had his health to worry about. Franklin said, too, he’d been reading about the strength of orangutans and gorillas and really wanted to try a great ape at quarterback, and he hadn’t been able to acquire one in time for the opener but he did track down a ring-tailed lemur and he figured, hey, he’s a primate, he’s got opposable thumbs, he doesn’t know a whole lot the playbook but he’s earned his shot. He finally reminded Burns and Todd that it had been “the greatest privilege of his coaching career” to coach the two of them, wished them luck and told them not to take it too hard if he asked any non-inebriated fans to take a few snaps, then left to head up to the press box to watch Auburn win 35-0.

What actually happened between them: Auburn won 34-0 as Franklin’s offense flailed, but defensive touchdowns and a Robert Dunn punt return helped boost Auburn to an easy win anyway. The lemur went 1-for-4 and was flagged for unsportsmanlike conduct after biting the referee’s ankle.

What two things about the Warhawks are causes for alarm:

1. Wow, they’ve got Ken Dorsey! What a coup! He’s got to be what, no worse than the second-best quarterback in the Sun Belt, right? I mean maybe he’s getting up there in years by now, but with his Miami and NFL experience you have to think he’d be cagey enough to do some big things for ULM regardless, and come to think of it why is the NCAA OK with this, they usually frown on …

oh. He’s a defensive end. A junior from Homewood. Nevermind.

Seriously, I got nothing. Chattanooga will at least have the advantage of coming towards the end of the schedule and being a I-AA team, possibly convincing Auburn the NCAA will simply award them the victory as long as they literally take the field. ULM doesn’t even have that. But wait! The ydo have a bye the first week of the season! And then one of their first three games will come against I-AA SE Louisiana! So they’ll only have two real games before coming to J-Hare to Auburn’s three, and one of those will be against Arkansas St., the same team that’s the sole patsy on Auburn’s early slate! They’re going to be far, far fresher! It’ll be a huge advantage! I am alarmed!

What two things about the Warhawks are causes for confidence:

1. The ULM brass decided that even though Charlie Weatherbie worked for peanuts, had a co-Sun Belt title to his name, had won an FBS school-record number of games in a single season (i.e. six) multiple times, finished over .500 in the Sun Belt last year, and was responsible for the only victory that anyone outside of Monroe can remember the Warhawks ever having, he wasn’t who they really wanted at the ULM helm. They wanted this guy: 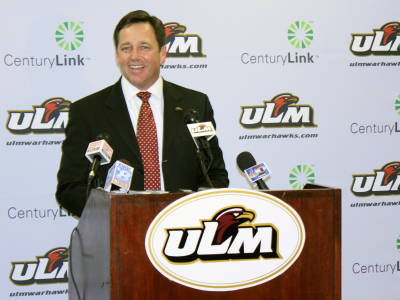 That’s Todd Berry, whose first and only D-I head coaching experience you probably remember even if you don’t know the name; he’s the guy who decided at the start of the previous decade that after decades of option football, what Army really needed to be running on offense was a complicated, pro-style passing offense that required top-notch quarterbacking talent, tons of extracurricular work on route timing and QB/receiver connections, and quick-footed, oversized offensive linemen well-suited to pass blocking–all of which, of course, you can always find in abundance at the service academies. What has two thumbs and knew this was going to end in disaster? Everyone who’s ever followed college football. Except Todd Berry, I guess.

So the upshot is that ULM hired a guy with a 5-36 lifetime coaching record at the D-I level and the infamy of landing on the shortlist for Worst Hire of the Past 15 Years. But I’m sure his efforts at directing the offense for a UNLV team that hasn’t been to a bowl in absolutely forever and sorta-kinda underachieved the last couple of seasons exonerates him from all that. Good work, Warhawks.

2. Every single other thing you can possibly say about ULM, pretty much.

What tidbit I found most interesting from Phil Steele’s ULM preview: Alas, I am once again working from a place that is not my home and don’t have access to my trusty 2010 Steele. Let’s turn instead to the popular preview countdown series at Pre-Snap Read and their post on No. 114 (!) ULM. Paul Myerberg writes:

U.L.M. must replace two of the finest defensive players in recent school history, quite a tall task. The first is linebacker Cardia Jackson, the Sun Belt all-time record holder with 318 career stops. 117 of those tackles came in his senior season, along with seven tackles for loss and one a half sacks, helping Jackson share conference defensive player of the year honors.

I wrote the exact same thing when I previewed ULM two years ago for the JCCW, but I simply cannot believe this guy didn’t change his name to Cardiac Jackson. Cardiac Jackson! He’d have been a damn superhero! He’d have been a first-round draft pick! He’d have starred in his own Shaft-style faux blaxploitation vehicle directed by, like, that Antoine Fuqua guy who did Training Day! He’d have been the African-American John McClain, man! And all he had to do was add a “c” to his first name. I know he’s already on his way to a productive pro career with the Rams and all, but this still seems like a massive, massive missed opportunity.

What tidbit I found most interesting in their associated Wikipedia pages: OMG “History“:

I think any commentary I could add about that last entry would only undermine its shimmering brilliance.

If the two most frustrating, disappointing Auburn teams of the previous decade can win their games against this program by a combined 100 points, yeah, I think the 2010 version is going to be just fine.