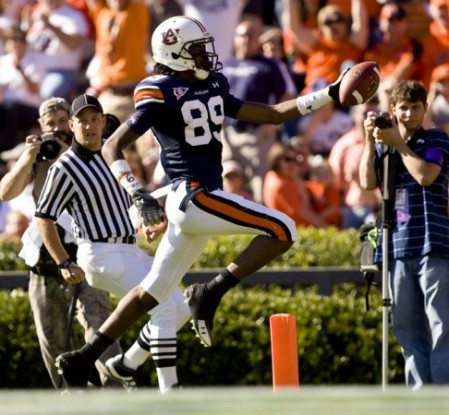 The difference a year can make truly is remarkable, no?

This time in 2009, what with Darvin Adams coming off of a nagging camp injury (and being just a dude who looked not-bad at A-Day), it looked like Terrell Zachery’s two career catches were going to be the only career catches for the entire on-field receiving corps against Louisiana Tech. Trooper Taylor’s pedigree (and Chris Todd’s), notwithstanding, no element of the offense was a bigger question mark than the wide receivers.

One year–and X receptions, X yards, and X touchdowns later–it’s arguable that no element of the offense is less of a question mark. Let us count the ways, shall we?

1. Adams. If there was one good thing about rewatching the terror of the Outback Bowl, it was being reminded of just how damn good the SEC’s most under-appreciated receiver became last year. The tantalizing thing: he was still just a true sophomore last year. His hands aren’t going to get a lot better than they already were, but another year with Taylor should make his already-ridiculous body control, his route-running, and his elusiveness even better. If he can become just a hair more of a deep threat, the package will be entirely complete.

2. Zachery. Between his rushes and his receptions, he touched the ball 35 times last year. He averaged 19.74 yards on those touches. And that was with a quarterback whose arm began disintegrating in Week 6.

3. Trooper Taylor. Given the kind of transformation he performed on the corps as a whole with what he had to work with last year, it’s safe to say that with the kind of depth he’s got in 2010, the wideouts can only be less-than-terrific.

4. The numbers. Yeah, about that depth: a year ago the depth chart beyond Adams and Zachery essentially read “1. Carr 2. freshmen.” This year, Carr has progressed beyond his limo-with-no-gas status, those freshmen are sophomores, and this year’s freshmen are potentially better than last year’s freshmen by a wide margin. When Taylor said the other day that he had options for who to take on the travel squad, no doubt he meant it.

All that said, that doesn’t mean that things are entirely perfect. Trovon Reed’s injury struggles in camp aren’t worrying just for what it means for Reed; they’re worrying for what they mean for the team. The unit’s biggest issue in 2009 was that when Adams and Zachery were blanketed or having a rare off-game, no one else was ready to give team a third threat, a third target to take the heat off the first two. Carr didn’t start making an impact until late in the year, Burns was still too raw in the position, the freshmen just weren’t entirely ready (save for the occasional play by Stallworth, who then of course tore up his ACL). (Oh, and Montez Billings never played a down and Tim Hawthorne’s heart wasn’t in it.)

This year, even if Reed isn’t that third threat, there’s options. Carr is fully gassed up; Blake showed flashes at the end of last year and seemed to be earning Malzahn’s trust; as long a shot as Benton seems to be the No. 3 right now, if he can get healthy and get back in Taylor’s good graces, he’s got the talent. And then there’s Burns–the athletic ability is there, without question, and if he’s fully harnessed that in the service of receiving, look out. That his performance in camp suggests that he just might have is maybe the most encouraging thing to have happened to the unit this offseason …

… and definitely would be if not for Reed. As promising as all of the above receivers are, that Reed has already worked his way into a de facto first-team spot (as well as drawn the kind of universal raves even Benton didn’t earn last fall) indicates that he remains the single most likely candidate to give Auburn a third genuine receiving threat. If Reed isn’t healthy, Auburn will still be very, very good at wideout, maybe even great if Burns or Carr blows up. If Reed is healthy, Auburn just might be phenomenal. We need him. And so his injury worries are worrying indeed.

Further down the depth chart, I expect Kitchens and Goodwin to have the sort of season Blake and Benton had last year; plenty of time on the field, freshman-wise, but not a ton of impact. And with both of them starting the year on the scout team, it’s hard to see unfortunate injury cases Pierre-Louis and Stallworth doing more than helping out on special teams, but they’ve got too much talent to rule them out just yet. Oh, and a word about Jay Wisner: I don’t think he’s going to make too many receptions. But he blocks too well to expect him to disappear entirely.

At tight end, Phillip Lutzenkirchen is the tight end. Robert Cooper may get a look in special, single-use jumbo packages or something, but with as many weapons as Gus Malzahn has at his disposal, I have to think that losing the Swede Killa to injury would simply mean losing the tight end out of the offense. As for the SK’s season, there’s not much reason on paper to expect him to surpass what Tommy Trott did last year; Trott was a fifth-year senior with a boatload of playing time under his belt, while Lutz is a true sophomore who rarely played outside of garbage time. Theoretically, only Lutz’s experience with the offense (and serious hands) would keep him from regressing from Trott’s reliable-if-unspectacular performance in ’09.

But then Malzahn picked the Swede Killa as the one offensive guy who really, truly impressed him over the first couple weeks of camp, so who knows? He does have those hands, and he has added some serious weight in the offseason. If he can block as well as he can catch, the battle between Lutz, Eric Smith, and Burns for the two spots alongside the line/Newton/Fannin/Adams/Zachery could be very, very interesting.

Adams and Zachery see relatively minor increases in their already-superior numbers (remember, only Childs and Adams at Arkansas matched them as a duo in the SEC), but it’s enough for Adams to make All-SEC this time around. The big push is made by Burns and Reed, both of whom top 300 yards receiving and make enough big plays to keep defenses well and truly off-balance in the passing game. The Swede Killa, meanwhile, improves on Trott’s 11 receptions and 144 yards, but has a few more breakdowns in the run-blocking department and sees Smith and the third and fourth wideouts take up more snaps late in the season.