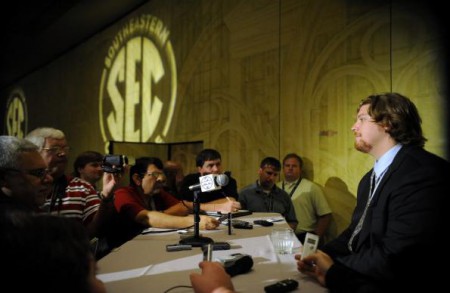 Oh, SEC Media Days. I love you for being the last oasis before we finally leave the desert of the offseason and start real, genuine, actual football news again. I love you for letting all of God’s head coaches take the podium for their moment in the sun, even the ones from Vandy and Kentucky, because sometimes they wind up being Robbie Caldwell. I love that you’ve somehow conned the rest of the college football world into thinking this particular media event is some kind of supernova to white out all the other little lampposts of other leagues’ media days.

But I don’t love you for your information, your scoops, for your relationship to the actual football your arrival heralds. The ratio of signal-to-noise has never been very high, but the last few years there seems to be even more hot air than usual: the Fulmer subpoena nonsense, the Tebow dramatics, now Agentpalooza. What do all of these things have in common? They have nothing to do with anything that happens between the two sidelines. There was really only one question I wanted answered at Media Days–“Mr. Savage, exactly how healthy are you? We know you’ll play, but after all your injury problems, are you fully, totally one hundred percent?”–and instead we found out he’s taking bowling. (We also found out he has a killer sense of fashion, which is more important, but still wasn’t what I was looking for.)  Particularly after 2009–a season when the league’s biggest talking points were officiating blunders and Lane Kiffin’s megalomania–I worry the SEC is getting so big as a media entity it’s getting swallowed alive by sportz, and nowhere is sportz more prevalent in the SEC calendar than at Media Day. I’m glad it’s behind us, for reasons that go even deeper than how close it means football is ahead of us.

But enough griping. We Auburn fans did learn a few things. A full transcript of Chizik’s remarks and a handful of player quotes are at the AUfficial site, and if you want a shorter summation, Andy Bitter’s got you covered. Details of Chizik’s pre-conference briefing with the Auburn beat hacks, Jay Tate’s got those.  Bullets of useful information:

— Gene Chizik once again left the neutrals hoping for a little more entertainment, but of course that’s nothing new to us day-in, day-out Chizik watchers. In fact, by this point, we’d be a little disappointed if he opened up to the media hordes at an event like this, right? Chizik has shown us since his arrival that he’ll drop the mask for his players and for the fans, but not for third parties … and though I know I’ve complained about it myself from time to time, it is who he is, and knowing  that and recognizing him for it makes him ours. Here’s to hoping he never changes.

— Chizik made an excellent point that most of his team has never gone through a season with the same two coordinators in place. In fact, Auburn hasn’t had a holdover in either position since Borges and Muschamp in 2007. Staggering, really.

— The freshmen will play, but that’s hardly a surprise. More intriguing is Bynes’ roll-call of the impressive true frosh through the summer: Owens, Holland, Mincy, Whitaker, Carter. Note that none of those guys were guys who were in for spring. Maybe Bynes was restricting himself to players who had just arrived? In any case, it’s maybe not surprising that those were five of Auburn’s most decorated defensive recruits.

— Anyone else get the impression that even Chizik was surprised that so many players–31/32, “a rarity”–qualified? Notice he didn’t say he expected similar results in the future.

“If he sees something I don’t see, he’ll come up to me and say, ‘Josh, do this, this and this on this play’ or ‘watch that guard,'” Bynes said. “Zac is like another linebacker out there on the field helping me out with a lot of things. He’s very intelligent, he does a great job of watching film, breaking down film. Me and him talk a lot on the field and having him come back will be better for defensive backs and linebackers.”

Having Etheridge back is about a lot more, I’d guess, than just keeping Drew Cole on the sidelines.

— Man, how awesome was Chizik and the players’ response to Agentpalooza? Even if I’m all for finding some sort of punitive measures (other than “none whatsoever”) for agents who tamper with college athletes, that’s not what I want my coach and players to say. I want them to say “It’s on us.” And they did. Because it is. (Can I also mention that it’s a little strange for Saban–who seems to preach personal responsibility above all else when it comes to football execution–wants to pass the buck to the agents on this one? He’s right that the agents involved are scum, but dude, it’s on you and your players, too.)

Also, kudos to Ziemba for just coming right out and saying “Yeah, those guys, I’ve seen ’em.” (The discussion of his exploration of injury-insurance was a pretty fun read, too.) His forthrightness has always been appreciated, and it still is.

— I think we’ve all been hoping Auburn would enter the season well under the SEC radar, but, eh, getting picked ahead of LSU and with the third-most first-place votes (!) indicates that might not happen. At least Arkansas’s still the consensus second-best team in the West, amirite? (As an aside, I have to give some kudos to the SEC writers for not drinking the Kool-Aid on LSU. I’m not expecting the national media–they went 9-3! They’re LSU–to follow suit. Also, dude, Tennessee below Kentucky? The Vols are going to be truly terrible, but Kentucky doesn’t look like they’re going to set the world on fire, either.)

— The media got things right on Mario Fannin (2nd-team RB), Wes Byrum (2nd-team PK, finally), and even threw Zac Etheridge a 2nd-team bone. (Ziemba and Bynes were both first team, as they should be.) But you know there’s going to be gripes and here they are: no Pugh? No Stevens? (Another aside: LSU had all of two players mentioned, first or second team. That’s a third as many as Auburn, half as many as Kentucky. Wasn’t Miles supposed to be a great recruiter?)

— I do worry that by mentioning the consecutive starts record, Chizik just jinxed Ziemba in to a high-ankle sprain against Chattanooga or something.

— As far as the rest of the SEC goes, it was fun seeing Mullen call the coachbot out on this “you can’t make the NFL in a spread” hogwash. And of course, it seems like it’ll be cool having Caldwell around. That’s about it.