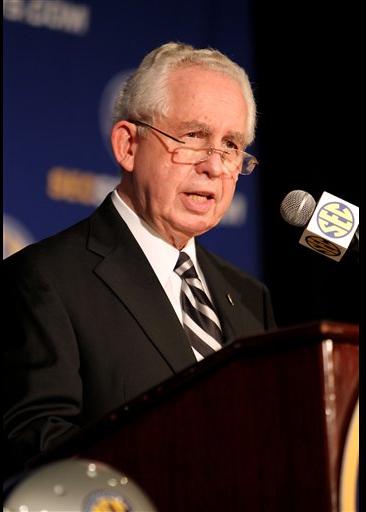 Hope you’re enjoying SEC Media Days, folks, and enjoying even more the delightful timing that handed us Agentpalooza just as Nick Saban was forced to take the biggest, most unavoidable, most un-controllable media podium he has to take all year. Then again, he seemed to sort of relish delivering that “pimp” line, didn’t he? I’d think he’d been sitting on it for a while. (For the record, I don’t think he’s all that wrong in this case.)

It’s a lot of fun, especially as reported by the likes of the EDSBS crew, but always remember that the most important thing about Media Days is that they mean that fall camp is right around the corner. For God’s sake, we’re now 10 days away from August. August! Oh man, oh man, oh man.

Anyways, a quick blow-by of links for reasons I’ll get into at the bottom of the post:

— The SEC’s released the first three weeks of their official television schedule. You know Week 1 is offering up some pretty thin gruel when Kentucky-Louisville finds its way all the way to ABC. That’s all right, though, because Week 2 is loaded. I’m glad Auburn’s going to let us just kick back and watch all day (though why no afternoon broadcast?)

— The one practical development to come out of Media Days so far (other than the fact that the SEC now has its very own Bill Stewart, which frankly was overdue), is Rogers Redding discussing the new rules involving wedges on kickoffs and other injury-related stuff. I’m worried the interpretative vagueness of the wedge rule–how well are officials going to be able to safely judge “two yards”–could lead to some controversial calls, and after last year, the last thing I want is another season marred by endless officiating bickering. I applaud the intent wholeheartedly, but I want to see what happens in practice.

— So, yeah, Kyle Parker decided to give up more than 1.5 million bucks because it wasn’t three million bucks in order to stay Clemson’s quarterback. Obviously, this makes Clemson substantially more dangerous, and now surviving that three-week at State/vs. Clemson/vs. Carolina stretch looks like a positively daunting challenge, even if individually I think Auburn will be a deserved favorite in all three.

On the plus side, Clemson blog Shakin’ the Southland has helped compensate for Parker’s questionable love of school and lack of greed by writing this exceptional breakdown of the Malzahn offense, with liberal references to Malzahn’s own book. Read it.

— Kevin Patterson, Bradley Hendrix, and Justin Fradejas are all returning to Auburn for their senior seasons with the baseball team. Excellent news, but as Kevin at PPL explains, Patterson’s return in particular does give Pawlowski a bit of a potential lineup headache.

— Kevin has also been busy illustrating how Auburn had somehow, received a commitment from virtually unknown Florida corner Devin Gaulden last week without anyone noticing it, thanks to the coverage being limited to local outlets. Rivals has finally caught up as of just a few minutes ago, but quite the weird situation here. Oh, and welcome to Gaulden, who’ll fit right in with the rest of Auburn’s recent collection of high-upside unknown quantities.

— On the one hand, ESPN’s handling of “The Decision” was indefensible, but on the other, at least the network is willing to let their ombudsman to absolutely tear them to tiny journalistic shreds on their own site.

Two more quickie things: Jordan Anderson got his props from Slive, and Zac Etheridge talks about coming back from injury. He expects to play from Week 1.

All right, so, I’m in Tucson (having watched the New Pornographers tear up the stage last night) after having swung through Tempe (where I’d watched the Gaslight Anthem tear up the stage Tuesday night), and I’ve got about five minutes before check-out, and so now it’s time to make the seven-hour drive back home. I’ll catch up with you tomorrow.