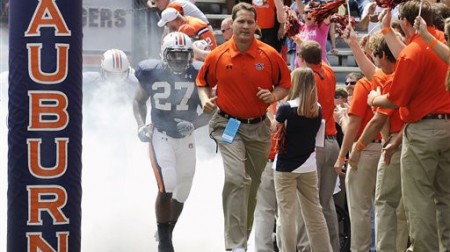 What type of head football coach are you? Find out by taking the 2010 quiz! Just about everything Michael Elkon writes on the SEC at Braves and Birds is worth a read, but this thoughtful examination on “CEO” head coaches vs. more hands-on types like Saban and Meyer rates as just about essential. Elkon wonders: if Les Miles is only as good as his coordinators, and that sometimes he can hire exactly who he wants and sometimes he can’t, then isn’t any success he might have more luck than acumen? Can you really call him “good” or “bad” when so much of his success or failure is dependent on forces beyond his control? Wouldn’t it be better to have a coach like Saban or Meyer who all but guarantees you at least one well-coached, elite unit?

Those are good questions, and the possible answers have some interesting implications for Auburn fans, starting with the ongoing appraisals of Tommy Tuberville’s tenure. Tubby was widely regarded as a Miles-type CEO (and Elkon seems to echo this viewpoint) whose success rested on whoever he happened to have hired as his offensive coordinator, but I think this does a disservice to Tubby’s incredible defensive record. When you consider that it didn’t matter who the DC was–Chizik, Muschamp, Rhoads, whoever wasn’t David Gibbs–the defense was going to know its business. You ask me, Tubby was quietly more Saban or Meyer than Miles in his affect on his team’s on-field performance. You can also argue that as damaging as the Tony Franklin hire proved to be, what ultimately determined the fate of Tubby’s offensive coordinators wasn’t how skilled they were, but what kind of talent they had to work with. When Tubby had Leard/Rudi/Daniels/Nowland or Campbell/Cadillac/Ronnie/McNeill, his offense worked, even with Noel Freaking Mazzone in charge. When he didn’t have those kinds of players, the offense didn’t work, even with Al Borges–who I think we all agree is no dummy–at the helm.

That brings us to Gene Chizik. In theory, Chizik should be able to replicate Tubby at his absolute best: top-notch offensive recruiting combined with a closely-supervised and brilliantly-coached defense, with an offensive coordinator who, at the very least, knew enough not to screw up the collection of talent he’d been handed.

This is why Auburn fans, yours truly included, are so giddy about the long-term potential of the Chizik regime. If Gus Malzahn could do what he did in 2009 with that level of talent, what happens when he (or some equally-creative replacement in the hopefully-distant future) gets his hands on the mid-Aughts-caliber players the current Auburn recruiting machine appears to be bringing in again? What happens when that offense gets to play opposite the kind of defense that Chizik helped produce under Tubby and has promised to produce again? In theory, 2004/2005 redux happens.

But this is why this year’s defensive performance is critical to our evaluation of Chizik going forward. For all of Chizik’s defensive success as a coordinator, we have yet to see that translate into anything similar as a head coach. Iowa St. declined in total defense both years Chizik presided there. So did Auburn last year. There’s extenuating circumstances in all three seasons, of course: a hopeless combination of youth and non-talent in Ames, the almost-as-hopeless combination of Dr. Gustav’s hyperdrive offense opposite the thinnest Auburn defense any of us can remember. Even the evidence of three straight statistical steps backward under Chizik’s watch isn’t damning just yet.

But a fourth straight–or even a minor step forward that doesn’t take full advantage of what ought to be a lethal offense–might be. At some point, and I would guess a shaky defensive outing this year would be that point, we’d just have to accept that Chizik isn’t going to have the sort of single-handed schematic impact we’ve seen from the likes of Tubby or Meyer or the coachbot or, to expand our net of examples a bit wider, a Paul Johnson or Pete Carroll. He’d be Auburn’s version of Les Miles.

Before you start firing off that angry comment, know that 1. that’s not what I’m expecting from his defense this season and 2. that wouldn’t be the end of the world, not by a long shot. Miles has a national championship under his belt that didn’t happen by accident, you know. When his defense collapsed in 2008, he made the necessary coordinating hire and saw them rebound to just about where they needed to be in 2009. The conventional wisdom says that Miles has yet to accomplishing anything without “Saban’s players,” but he’s recruited just about as well as Saban did on the bayou. What appears to be holding him back is what we might call “Tubby’s Disease”: a drastic lack of development from offensive recruits thanks to sub-par position coaching and the absence of any overriding offensive philosophy to unify the coordinator’s and position coaches’ efforts. As long as the likes of Taylor, Luper, and Grimes stick around, position coaching’s not going to be a problem for Chizik, and with the hire of Malzahn he’s also already shown a willingness to find a strong, unique vision to hold it all together. Just because he might be the same kind of coach as Miles doesn’t mean he’s doomed to make the same mistakes–and of course, given his production to-date on the recruiting trails, who’s to say he won’t enjoy the same successes?

However, it would mean Chizik would be vulnerable to the same weaknesses that have plagued Miles and even one-sided coaches like Tubby and Richt*: in the event he had to replace one or both coordinators, he’d be left at the mercy of what the market could offer him. One poor hire would hurt. A poor hire combined with a downturn in recruiting, even on one side of the ball, and you wind up at 5-7 and losing to Alabama 36-0. And unlike Tubby, Chizik might have to worry about both sides of the ball betraying him, as they have for Miles (albeit in different seasons … if you’d combined the ’08 defense with the ’09 offense, he’d already be out of a job). If Chizik’s 2010 defense doesn’t improve by a substantial amount, if it doesn’t bear the kind of personal fingerprints we’d want to see out of our head coach, Auburn fans should buckle up; there should be some big highs ahead of us, thanks to Chizik’s current staffing decisions and his recruiting, but there could also be some big lows.

Again, I’m not trying to be alarmist; what I expect is that the 2010 Tiger defense is going to finally show what Chizik and his staff can do with a modicum of depth, talent, and more than one season in which to work. You don’t have to look any further than last year’s Iron Bowl for proof that between Chizik and Roof, the old tactical chops are still very much intact. But if for whatever reason it doesn’t happen, for all his other positive traits (and there are tons), it’ll be time to wonder if Chizik’s presence alone will ever be reason to think it will.

*If Saban ever had to face SEC defenses without either Jimbo Fisher or a lineup of mega-studs, he might have the same kind of troubles Tubby had on offense or Richt’s had on defense. Credit to him, though**, Saban has made sure both that he’s kept his preferred coordinators in his employ and that they’ve always had plenty of talent at their disposal***.

***It’s worth noting that he can thank Mike Shula for a lot of that recent talent, though. John Parker Wilson, Andre Smith, Greg McElroy, Mike Johnson … all Shula recruits, and that’s just the offense. I’ll offer up multiple toes if the Tide fail to win the West the next couple of years, so we can say that Saban can’t win without Shula’s players. Please please please please please.