A week-by-week preview of Auburn’s 2010 opponents. But since you can find straightforward overviews in a half-dozen magazines and a ton of places across the web, these are a little more … disposable. Light. Cheese-puffy. Previously: Arkansas St., Mississippi St., Clemson. 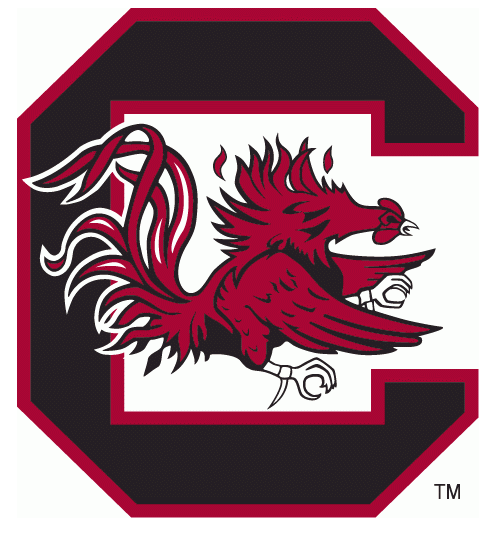 What their logo tells us about their football team: Oh Lord. They’ve taken a chicken and strapped razor blades to its legs. Kiddos, the Action Cats called:

They’d like their gimmick back. Then again, we are talking about a program about which Wikipedia says this:

Four Gator Bowls! Three Outback Bowls! In 118 years of football! Maybe the “We know it’s a farm animal best known for pecking and waking people up. But look! Razor blades! It wakes people up, but it wakes them up ruthlessly, damn you!” approach is the correct one.

What happened last year: Steve Spurrier quietly put together the best coaching job of his five-year Carolina tenure, guiding a team dreadfully short of experience and as heavy on underclassmen contributors as any in the country to a 7-5 record, one highlighted by a 34-17 spanking of archrival Clemson. Surprising as that result might have been to some observers (like your humble Auburn Blogger), it still left a ton of room for improvement in SEC play; the ‘Cocks failed to win a league game on the road and earned two of their three wins by a combined 6 points at home against Vandy and Kentucky. A step forward, certainly, given what Spurrier had to work with, but not a huge one, especially after Carolina’s total mail-in job against UConn in the hotpapajohnfanfiction.com Bowl.

What happened the last time these teams met: The Carolina staff became concerned late in the third quarter, as Spurrier, visibly incensed by Auburn’s long drive to open the second half and subsequent onsides kick-recovery, removed his headset and was shown to literally have steam coming out of his ears. After Auburn converted a 3rd-and-21 with a 25-yard pass to Courtney Taylor–virtually cinching that the homestanding ‘Cocks would not touch the ball at all in the third quarter–a noise witnesses would later compare to “an old tin shed being sheared apart in a tornado” appeared to emanate from Spurrier’s chest and, after a blood-curdling scream of fury, the OBC suddenly dropped his head and arms and stood stock-still on the sidelines, awkwardly upright, steam pouring out of his ears and nostrils. He was stretchered away underneath the stadium, where Carolina trainers discovered that Spurrier was, in fact, a complicated homemade robot constructed our of old sweatbands, discarded golf club shafts, hamster wheels of various sizes (about half still occupied by bright-eyed hamsters and one gerbil wearing a collar and nametag reading “DR. WHISKEY”), and several ears of corn of indeterminate function. The chest was filled by (and the Spurrier-bot apparently powered by) Spurrier’s Heisman Trophy, hooked up to and electrified by a small Interstate car battery hidden in his abdomen. The on-hand EMTs jumped off the battery using a defribillator and a pair of jumper cables, whereupon Spurrier sprang back to life, told the assembled medical professionals “Think that took you long enough. You want me to miss the entire damn fourth quarter?” and ran back onto the field.

What actually happened between them: In one of the more remarkable games of the Tuberville era, Auburn only had six possessions total, but saw four of them turn into scoring drives of nine plays or more–including the epic 17-play and 13-play marches that took up the first 15:08 of the second half–to edge the ‘Cocks 24-17 and preserve their No. 2 ranking in the polls. (Sigh.)

What two things about the Gamecocks are causes for alarm:

1. Sorry for bringing up bad memories, Auburn fans, but this: 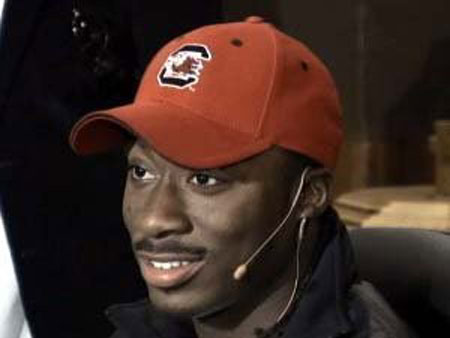 One of the biggest reasons Carolina has been so mediocre on offense for so long is that they haven’t had a running game (more on this in a sec), and one of the biggest reasons for that is they’ve never had a game-changer at running back. The gentleman above, unfortunately, could very well be that game-changer. And he should work hand-in-hand with Cause for Alarm No. 2:

2. That the identity of this team is going to be anathema to Auburn’s. For years, Tubby made a living grinding away with stud running backs, relying on a star-less but dominant D, and ignoring the fact he didn’t have much in the way of a quarterback or overall NFL talent. (Certain teams excepted, of course.) For all of Spurrier’s past offensive wizardry, this is going to be the way forward for the ‘Cocks: tight games controlled by Ellis Johnson’s well-drilled defense and senior punter/kicker Spencer Lanning, lots of plowing into the line from Lattimore, and the erratic Stephen Garcia limited to the occasional play-action pass and short throw to the tight end.

For high-flyin’ 2010 Auburn, beating 2010 Carolina will be like exorcising their own past demons, the college football equivalent of the end of Zelda II. You know, the one where Link has to destroy his own shadow. (Uh … “Spoiler”?)

Like all Auburn fans, I love Dr. Gustav’s offense and all, but this kind of role-reversal makes me nervous.

What two things about the Gamecocks are causes for confidence:

1. If Lattimore’s decision was a blessing for Carolina, for this one game, it may also be a curse. Ted Roof and his linebackers showed in last year’s Iron Bowl that they can shut down a running back they’re focused and ready to shut down … and, golly gee, do you think Auburn’s coaches might be at least a little invested in making Lattimore’s life at Jordan-Hare as hard as possible?

I’ve mentioned that the game is at Jordan-Hare, yes? And that Auburn’s coaches will do everything they can to shut Lattimore down and put the game in Garcia’s hands? Yes?

What tidbit I found most interesting from Phil Steele’s South Carolina preview: I’m out of the office, technically speaking, and neglected to bring my copy of Steele with me on the road. But here’s a fun stat for you regardless, namely, Carolina’s year-by-year rankings in the SEC in rushing yards per game under Spurrier: 11th, 6th, 12th, 12th, 12th. For that whole “win with defense and bruising offense” plan to work, Carolina has to rush the ball. And under Spurrier, they’ve got no foundation for any kind of success on the ground. Lattimore will help, sure. But there’s a long way to go, and it’s not like you can expect a huge step forward fro mthe offensive line when they’re now on their third offensive line coach in three years.

What tidbit I found most interesting in their associated Wikipedia pages: Quote the first from the “South Carolina Gamecocks” overview page:

While the men have traditionally been the Fighting Gamecocks and the women were previously the Lady Gamecocks, this distinction was discontinued in part to help eliminate gender bias in their athletic department, and to discount the oft-held misconception that their mascot is meant to honor/promote animal bloodsport in any way.

Quote the second, occurring all of three sentences later on the page:

The official school colors are garnet and black. However, some officially licensed merchandise also contain gold, which represents the spurs historically worn by gamecocks in cockfights.

(Pssst … ‘Cocks … you’re going to have to discount harder.)

What I actually think about this match-up: I’ll make this quick: I’m concerned, yes, but I don’t think Carolina is good enough, top-to-bottom, to come into J-Hare and win. It’s tougher to say that with the game so early in the season, when Carolina has typically been so much stronger under Spurrier than later in the season–though they lost their final three SEC road games last year by a combined 49 points, they should have beaten Georgia in Athens in Week 2–but the gap between the puttering ‘Cock offense and Auburn’s offense should be much, much wider than the gap between the SC defense and Auburn’s. (I’ll remind you that the latter will still be in Week 4 its own self–and not exhausted–and playing at home.)

Yeah, I think the ‘Cocks will be able to put a drive or two together behind Lattimore; yeah, thanks to Johnson and their crew of underrated defenders, I think they’ll have some success slowing Dr. Gustav’s bunch down. But in the end, unless the turnovers break Carolina’s way–and given Garcia’s track record on the road, they shouldn’t–I like Auburn’s offense to break through more often than the visitors’. It’s going to take a damn good team to beat Auburn on the road this year, and while I like Carolina (and give them a better shot at it than Clemson, even after Kyle Parker’s decision to return, damn him), I don’t think they’re quite that good.