A week-by-week preview of Auburn’s 2010 opponents. But since you can find straightforward overviews in a half-dozen magazines and a ton of places across the web, these are a little more … disposable. Light. Cheese-puffy. Previously: Arkansas St., Mississippi St.

What their logo tells us about their football team: Well … it’s a paw. Of a Tiger, I guess. Or a Wildcat, or Mountain Lion. Something feline. Unless it’s a wolf. Could it be a wolf? In any case, it’s a very unique, very memorable image for a program that’s had a ton of unique, memorable moments over the past 20 years. Like, um, that time they, uh … well, they did beat Florida St. that year Diddy Bowden threw the game so his son could keep his job. I remember that. But I’m sure they’ve had a lot of, you know, conference championships and stuff I’m forgetting.

What happened last year: Give him credit: in his first full year on the job, Dabo Swinney overcame the fact that he goes by “Dabo” (amongst other, lesser obstacles) and brought Clemson closer to that elusive ACC title than either of his two predecessors. The Tigers won the ACC Atlantic or Coastal, whichever division they happen to be in, and lost out to Atlantic or Coastal champ Georgia Tech in a wild, see-saw 39-34 championship game.

But this being the ACC, that ACC divisional crown came a little more cheaply than they do in the SEC; the Tigers still finished at “just” 8-4 in the regular season after losses to Tech, TCU, South Carolina, and a truly dreadful Maryland team. A win over Kentucky in the I Don’t Have To Tell You Where Bowl Because It’s Kentucky And They Go There Every Year did bump them to a final record of 9-5.

What happened the last time these teams met: Brand-new Auburn offensive coordinator Tony Franklin used the practices leading into the 2007 Chick-Fil-A Bowl to install and then unleash his spread offense against the unsuspecting palmetto Tigers. Behind his successful rotation of dual quarterbacks Brandon Cox and Kodi Burns, Franklin’s offense appeared to keep Clemson off-balance throughout and racked up 24 first downs, 423 total yards, and 90 total plays in the 26-23 overtime win.

What two things about the Tigers are causes for alarm:

1. Sometimes I feel like all Swinney’s success at Clemson–he’s now 13-7 overall, with that divisional crown and a positively Chizik-like buzz on the recruiting trail–is a direct result of the football gods balancing out how merciless both I and my friends were when Clemson handed him the job. Really? You’re giving it to the wide receivers coach permanently? Because he beat Boston College and South Carolina? And his name is Dabo. OK, Clemson administration, whatever you say! I’ll just be over here in the corner snickering uncontrollably and putting together my fantasy All-Time Dumbest Let’s Just Give It To the Interim Guy Because He Seems Nice and the Players Like Him coaching staff. Dabo’ll coach WRs, Bill Stewart special teams, we’ll have Bobby Williams be the DC, Bill Doba can fill in somewhere.

Now Dabo is having the last laugh, as they say, and frankly the parallels between him and Chizik are a little bit troubling.

2. I don’t know how much you believe in the Ewing Theory, for whose existence the SEC has argued in favor with one of the all-time classic examples (Peyton Manning/Tennessee), but if there was ever any truth in it, you’d expect it to happen this year for Clemson … because one player doesn’t get any more important to a football team than C.J. Spiller was last year to the Tigers. Spiller only led the team in rushing, rushing TDs, total TDs, yards-from-scrimmage, punt returns, kick returns, and (as you’d expect) all-purpose yardage. Pity he only finished third in receptions and receiving yards, huh?

But of course, for all of Spiller’s brilliance, Clemson never did win that ACC title. It would be just like the wacky world of college football for it to happen now, right?

What two things about the Tigers are causes for confidence:

1. This won’t be the last place you hear this, particularly once the game week preparations hit full swing, but: Clemson has lost 13 straight to Auburn. Last win? 1952, a span of 11 regular-season meetings and two bowls.

And as it’s worth reminding you, one of those losses came with Tony Franklin directing the Auburn offense. So we’re talking some pretty serious mental blockage for Clemson v. our Tigers, no?

2. You can pick out whatever factor you like to explain that phenomenon, but for me, it boils down to one thing: purple. As I said back when Auburn signed up to play Northwestern, it’s not a color any self-respecting football team should try to get away with, unless Louisiana is involved. If you don’t have a connection to the bayou and the kind of reckless insanity that makes anything possible fashion-wise, even purple football uniforms, don’t even try it.

But Clemson has. And so is it really a surprise they’ve struggled so badly against Auburn? Both teams are the Tigers, in the South, and wear orange. One accents that orange with navy. The other, with purple. Picking a winner here is E-Z.

What tidbit I found most interesting from Phil Steele’s Clemson preview: Not related to Auburn in the slightest, but …

Are you serious, South Carolina? It’s been 40 bleeping years since you’ve won even two games in a row in an annual series against a team that, yeah, is usually pretty good but ain’t exactly Notre Dame to your Navy? Honestly? Hang your heads in shame, ‘Cocks.

What tidbit I found most interesting in their associated Wikipedia pages: About that logo …

The Tiger Paw logo was introduced at a press conference on July 21, 1970, it was created by John Antonio and developed by Helen Weaver of Henderson Advertising in Greenville, South Carolina, from a mold of a Bengal Tiger in the St. Louis Zoo. The tell-tale hook at the bottom of the paw is a sign that this is the official licensed trademark for the university.

Oh, well, a tiny hook! I take all my cracks about it looking like a dozen other schools’ logos right back.

What’s too awesome not to include: 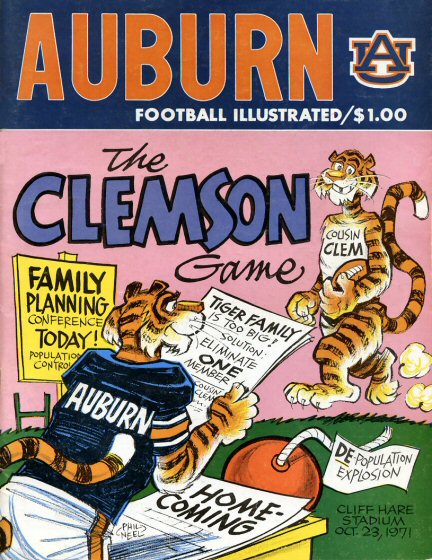 What I actually think about this match-up: Quite frankly, it’s hard to know what to think about Clemson as long as their freaking quarterback still doesn’t know what to think about whether he’s playing for Clemson this fall or not. I still have to expect that Kyle Parker isn’t coming back to CU–that’s an avalanche of guaranteed money he’d be walking away from, whereas football would conceivably wait for him, Drew Henson-style–but until we really know, who, uh, knows?

If Parker does in fact move on to the baseball diamond full-time, forgive me if I like Auburn’s chances. Swinney’s got himself a great offensive line to build around, but … no Parker? No Spiller? No Jacoby Ford? (Or anyone who caught more than 14 passes last year?) That’s an awful lot of holes to fill in the skill positions, and it’d be a particularly big problem at QB, where neither Tajh Boyd not Michael Wade would come in with experience in any kind of game remotely like “at Auburn.” (Clemson’s first two games of the season? North Texas and Presbyterian. Good for confidence-building. Less good for potentially having a redshirt freshman ready to play at J-Hare.)

Defensively, Clemson should be pretty stout up front–all upperclassmen, five-star megarecruit DaQuan Bowers coming into his own at end–but nothing special in the back seven. And given that Auburn’s offensive line  should be able to battle even the country’s best d-lines to a draw, “nothing special” isn’t going to cut it against Malzahn’s offense this year, I don’t believe.

So I’m confident … but that doesn’t mean there’s not danger here, especially if Parker returns. Auburn’s defense could get shoved around a bit up front. Even without Spiller, there’s some real talent at running back. The defensive line could get a couple of quick stops on their own. If a couple of long drives eat up a lot of the first half and Auburn suddenly finds themselves down 14-3 midway through the second quarter, then what happens?

If this game was in Clemson, that would be a distinct possibility, and if that possibility came into play, it’d be lights out. But with the game in Auburn, with Auburn’s greatest offensive strength neutralizing Clemson’s greatest defensive strength, and with Clemson’s biggest offensive weakness–a new quarterback, probably, and new receivers–unable to take advantage of Auburn’s relative weakness in the secondary, I’m not seeing that scenario as all that likely … nor, frankly, a Clemson win regardless. If Parker returns, we’ll re-evaluate. But until then, I think Auburn’s the favorite here for a reason.