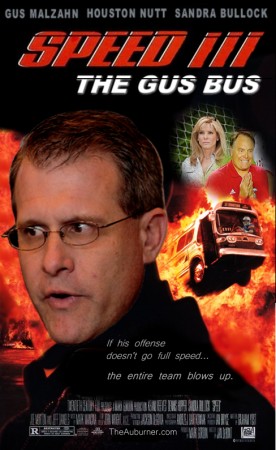 By the time the dust settled on the 2009 Auburn football season, I still hadn’t decided what I thought of Auburn’s decision-making in that nebulous area between the opponent’s 30 and 40. On the one hand, I’ve always been a proponent of going for it in that situation–the benefits of a potentially 17-yard net punt or a 50/50 (if that) field goal attempt rarely seem to outweigh the benefits of giving up on a possible touchdown. So I was happy when Chizik and Malzahn mostly stayed aggressive, either looking for the first out of the crazy quick-kick formation or just going for it straight-up.

But then, man, we get to the end of the season and look up, and Wes Byrum–in one of the best seasons put together by any kicker in the country–has only attempted 16 kicks. That doesn’t seem like enough. And then you look at how lousy Auburn was on those fourth-down conversions, and you start to think … maybe going for it wasn’t such a hot idea.

In certain cases (i.e. 4th-and-long in your own territory against Ball St. when the moon’s rays are having a strange adverse effect on the tensile strength of Onterio McCalebb’s ankle), it certainly wasn’t. But this must-read post from MGoBlog* suggests that by-and-large, it certainly was. And that in 2010, going for it will always be the hot idea. Every time. Almost. 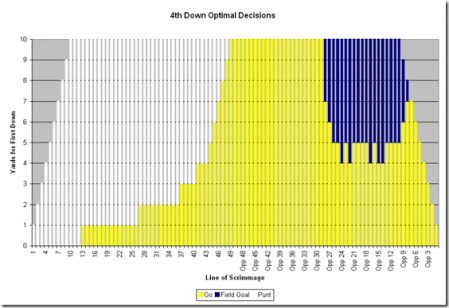 As you can see: once you cross the opponent’s 45 or so, MATH says you shouldn’t even think about punting, and you probably shouldn’t send the field goal unit onto the field unless it’s 4th-or-5 or longer and it’s a very makeable field goal.

Admittedly, that’s with an average kicker; with a Byrum, you’d see the blue section expand. However, that’s also with a perfectly average offense. What happens if you have an outstanding offense? Like, say, 2008 Florida? You shouldn’t ever punt, period.

No, Auburn probably isn’t going to be quite as explosive (especially on a per-play basis) as the Tebow/Harvin Gator juggernaut. But they’re going to be pretty damn explosive. And every time Auburn voluntarily yanks them off the field a play early, it lets the defense off the hook. As the MGo writer says:

A punt is conceding any chance of scoring and an offense this good should not give up that right so easily.  This is the basic philosophy behind the vaunted no punting HS coach in Arkansas.  His team isn’t necessarily good because he doesn’t punt. He doesn’t punt because his offense is good. Why waste another scoring opportunity?

Also consider that if you know ahead of time that you’re not settlign for a punt on fourth down, that this opens up all kinds of play-calling possibilities on third down. Maybe 3rd-and-7 isn’t an automatic passing down anymore, for instance. Maybe 3rd-and-4 opens the door for two straight power rushes. If you’re Auburn in 2010, and you have the kind of weapons and tempo that Gus Malzahn will have at his disposal … should you punt? Ever?

Of course you should. We all know that. Even MATH agrees that if you’re talking about taking on a stronger-than-average defense–which you see regularly in the SEC–then things can change dramatically. And if it’s 4th-and-11 in opponent’s territory, bring on Byrum.

But I do think the MGo post makes an incisive, important point: this offense should not just walk off the field unless it has to, and if it’s third down somewhere across the opposing 40, Malzahn should call a play that takes into account a second play on fourth down. Auburn is what it is and will always be as long as Malzahn is on the sidelines: a high-flying offense-first team that will live and die, first and foremost, by how many points it can put on the board. The best way to put as many points on the board as possible? Using all four plays to make a first down, as often as reasonably possible.

So I’m retroactively glad about how often Malzahn pushed things last season, especially early in the season. It didn’t pay off then. But it’s still a good omen for the future.

*For the few of you who are interested in seeing how the sausage is made here, click here.

Gus ‘shop by the Auburner.