In which a recruit’s name is plugged into Google and the bits of information that trickle out–guru ratings, newspaper profiles, YouTube highlights, all that stuff–are synthesized in the hopes of getting a clearer picture of the player we’ll see at Auburn next fall. Previously: Jessel Curry, Craig Sanders, Roszell Gayden, Brandon Mosley, Demetruce McNeal, Jake Holland, Shaun Kitchens, Cody Parkey, Cameron Newton, Joel Bonomolo, LaDarius Owens, and Antonio Goodwin. 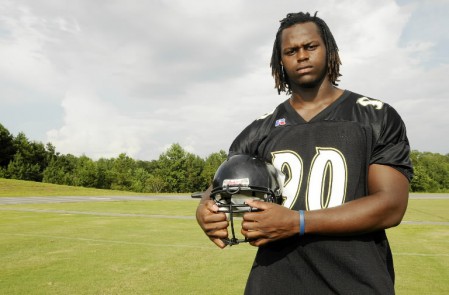 When Kenneth Carter first committed last summer, it was nice for Auburn (what commitment isn’t?), but it wasn’t a huge deal. At the time, Carter was a consensus three-star recruit, held a relatively light offer sheet, was seen as a potential grades risk, and maybe most importantly was part of a big rush of July commitments, most of which carried more hype than Carter.

Fast-forward 11 months, though, and Carter stands as one of the key commitments of the 2010 class. He’s one of only two natural defensive tackles in the group, he blossomed into one of the higher-ranked players in the state of Alabama, and looks like a potential anchor in the middle of the line going forward. In short: maybe getting Carter on board wasn’t a huge deal at the time. But it looks like a very, very big deal now.

HIGH SCHOOL: Recorded 76 tackles (45 solo), 16 tackles for loss, two sacks, 21 QB pressures, five forced fumbles, one field goal blocked and an interception returned for a touchdown as a senior … No. 5 on the Birmingham News’ list of the Alabama Super Seniors … Ranked as the No. 22 player in Alabama by SuperPrep … Named to the All-Southeast Region team by PrepStar … Was a 2009 Alabama-Mississippi All-Star game participant … Was voted to the 2009 5A All-State team by the Alabama Sports Writers Association … Voted the 2009 5A Lineman of the Year by the Alabama Sports Writers Association … Was a member of the “Best of the Rest” on the Mobile Press Register’s Elite 18.

Maybe the first reaction is “two sacks?,” but then you realize just how active Carter was otherwise, particularly for a DT: 45 solo tackles (!), 21 quarterback pressures, turnovers, even a field goal block … yes, I think he’s got a motor. As for honors, “5A Lineman of the Year” isn’t too shabby.

That said, he’s going to have to add a little bit of weight to make an immediate impact at Auburn. At 6’5″ and “just” 267 pounds, Carter will probably have to get heavier to stand up against the run in the SEC. Of course, he’s got plenty of time to get there, and more importantly, plenty of frame on which to put that new weight.

RECRUITNIK HOO-HA: As mentioned, when Carter first committed, he was mostly a nonentity to the recruiting services, a run-of-the-mill three-star. Thanks to that big senior year and a big performance at the Alabama-Mississippi All-Star game, that would change. Carter finished the year a four-star at Rivals, a top-25 DT in his class, and the No. 8 player in Alabama. At Scout, Carter was a four-star and, even better, the No. 17 DT. (They list even better stats for Carter’s senior year, so if you want to use those, be my guest.) ESPN was a little less enthusiastic, giving him three stars and a slightly-above-average grade of 78. They write:

On paper, Carter has good size, but nothing that would make you go wow. He looks every inch of his listed 6-foot-4 and has a great wingspan. He moves around the defensive line in high school, but is likely more of a true interior player in college. Displays flashes of good quickness off the ball. Displays good strength and when he makes contact with a blocker, he can knock him back. Naturally, when he uses his hands he is tough to block with his reach, but needs to do a better job of bringing his hands. He is a big kid and plays that way. He needs to be aware of his pad level because he can allow blockers to get into his chest … As a pass-rusher, he can bull his way back and if he gets his hands up, he can be a tough obstacle to throw over … His build can be an asset, but also a hurdle at times if he does not sure up his technique.

Nothing too incisive there, really. Ironically, ESPN was higher on Carter than the other two services when he committed, but as is often their wont, never went back to re-evaluate him after his big senior season; he remained their No. 35 DT.

As for offers, Scout says the Tide and LSU offered, but Rivals limits him to a much less impressive list of Kentucky, Ole Miss, and Southern Miss. The guess here is that there was interest from Alabama and Les Miles and Co., at least, but maybe not firm offers. So it goes for the late bloomers.

LINKS OF POTENTIAL INTEREST: No embeddable highlight,s unfortunately, but the AUfficial site has you covered. As you can see, Carter is tall.

Carter wound up at No. 5 on the B’ham News’s Super Seniors list, and the accompanying profile of his life and career at Greenville is well worth a read:

Tigers coach Ben Blackmon didn’t initially realize how much speed and range Carter had. A speed sweep by Carver of Montgomery in the second game of last season gave him a glimpse of what his lineman could do.

“He was playing that defensive end and he was getting reached by that offensive tackle,” Blackmon recalled. “He fought off the reach block and chased down the running back for a 2-yard gain. I was like, ‘Wow. He’s got a lot of range.’

Blackmon also had nice things to tell the news when Carter became a late replacement for the Alabama team in the Alabama-Mississippi game:

“He’s real strong, pretty physical and real rangy,” Blackmon said of Carter. “He can cover sideline to sideline really well. He’s also very versatile. He can play on the inside or the end and has even played on the offensive line for us occasionally.”

Carter said in his final games of the season with Greenville and in the Classic, he wants to work on his technique and continue to improve.

“I need to get better with my hands especially,” he said. “And I’m going to have a chance to do that against some of the best players around in the next couple of months.”

And as mentioned, Carter made the most of that opportunity, capping an impressive week of practice with a sack and a tackle for loss in the game itself. His performance helped take him from no. 20 to no. 9 in the T-town News’s list of the state’s top players.

Though Carter initially said he’d be open to visiting other schools, no other school ever mounted a serious challenge to his Auburn commitment. Carter explains why:

“It’s been on my mind a lot, but I know I have made the right decision,” Carter said. “Auburn is where I want to be.”

Though it was no decision to be taken lightly, Carter said the choice came naturally.

“I’ve been an Auburn fan my whole life,” Carter said. “There really isn’t a choice when your whole family are Auburn fans.”

Interestingly, the article states that Carter would want to stay at end. Sorry, Kenneth: you’re needed inside, my man. At least he knows what plans the coaches have for him.

Lastly, that Carter wound up with the kind of stats he did even while being the obvious focus of opposing offenses is even more impressive.

WHAT CONCLUSIONS WE CAN DRAW, IF ANY: OK, first, the bad news. Between the lack of early top-of-the-line offers, the need to get up to true defensive tackle stoutness, and the general longer adjustment period for players along the line than at, say, running back or secondary (especially for a player like Carter that might need a little work on his technique), I’m not expecting Carter to enter the rotation right away. Between Blanc, Fairley, Lykes, Travis, and even Jeffrey Whitaker, Carter shouldn’t have to step in immediately, and that’s a good thing: his profile doesn’t strike me as the sort that would be ready from Day 1.

But down the road? Look out. You can see in his film why Carter’s ceiling is so high: he’s huge and will only get more huge, he’s as active and productive as you can hope a tackle to be, he’s got the foundation ready for Rocker to build on. The sky is the limit here, and it’ll be a big surprise for me if Carter’s not a major part of the Auburn defense by at least his third (redshirt sophomore/junior) season. All-SEC? NFL draft pick? Not out of the question.