In which a recruit’s name is plugged into Google and the bits of information that trickle out–guru ratings, newspaper profiles, YouTube highlights, all that stuff–are synthesized in the hopes of getting a clearer picture of the player we’ll see at Auburn next fall. Previously: Jessel Curry, Craig Sanders, Roszell Gayden, Brandon Mosley, Demetruce McNeal, Jake Holland, Shaun Kitchens, Cody Parkey, Cameron Newton, Joel Bonomolo, and LaDarius Owens. 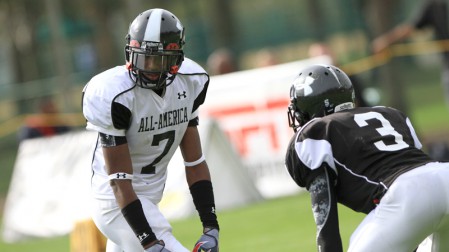 This is Antonio Goodwin. It’s a little hard to remember now, but there were some knocks against Auburn’s recruiting in the mainstream media early last summer. Auburn fans were somewhere between fine and elated with how things were going, by and large, but a few writers looked at Auburn’s smaller total number of commitments, lack of immediate commitments from the first Big Cat Weekend, and lack of top-end four-star types and declared that Auburn was falling behind again.

Goodwin, as one of those top-end four-star types, helped put a stop to that kind of talk … and re-affirmed, just in case the surprise signing of DeAngelo Benton and commitment of Jeremy Richardson hadn’t already, that with Trooper Taylor around Auburn was (is) going to have a major say in the recruitment of the South’s best receiving recruits.

BASICS: Let’s see what the Auburn Signing Day bio sheet has to say:

HIGH SCHOOL: Ranked as the No. 18 player in Georgia by SuperPrep … Named to the All-Southeast Region team by PrepStar … Was a participant in the 2010 Under Armour All-American game … Ranked 36th on the Atlanta Journal Constitution Top 50 … No. 80 on the Mobile Press Register’s Super Southeast 120 … Had over 800 yards receiving and seven touchdowns as a senior … Honorable mention selection to the 2009 Class 3A All-State Team.

Nothing too thrilling there, I guess (though if Booker T. Washington plays in Atlanta’s run-dominated public school league ,that might explain the relatively ho-hum numbers). If he’s a full 6-2, though, it’s probably safe to assume Goodwin is going to stick as an outside threat rather than in the slot. I’d think.

RECRUITNIK HOO-HA: This part is much more thrilling. Scout and Rivals have similar assessments: four stars, one of the top 40 wide receivers in the country (No. 39 at Rivals, 30 at Scout), one of the top prospects in Georgia (No. 29 at Rivals). Scout’s assessment:

Goodwin is one of the fastest prospects in the state of Georgia and that is what makes him a top recruit. He is a vertical threat, he is explosive, and he is someone that can make a big play downfield at any time. He needs to work on his route running and catching the ball more consistent. He has great length (6-2), he goes up for jump balls well, and his best ball is ahead of him.

However, ESPN’s assessment was a bit different from Rivals’ and Scout’s. They didn’t think Goodwin was a very good prospect … they thought he was an outstanding prospect. As in, the No. 47 player in their top 150 overall, the No. 8 athlete, a four-start with a sterling grade of 82. They write:

This kid is an exceptional athlete who can really run. Goodwin is tall, explosive, versatile and he possesses tremendous ball skills. We are not so sure he wouldn’t end up being an exceptional corner, if he remained on defense. He has a lean, lanky frame with good height and long arms. Has experience as a return man as well. He shows the top-end speed to stretch the field vertically and he possesses the leaping ability and big, strong hands to make plays in jump-ball situations. His body control and sideline awareness is very impressive. He has a knack for making plays and turning quick hitters into home runs after the catch. He shows excellent initial quickness and will consistently drive defenders off the line … His focus is solid and he is a consistent pass-catcher. He is doing a good job of plucking on the run, instead of letting the ball get into his pads. What stands out about Goodwin is his smooth change-of-direction and ability to accelerate rapidly for his size. He is a graceful athlete that can weave and flow with fluid hips and little-to-no wasted motion. In our opinion, Goodwin needs to develop some route-running chops. He is so athletically gifted that he gets away with not being as precise as he should be. Must learn to recognize coverage, attack alignment consistently and eat up cushion with a purpose. He has all the tools and if he gets coached up on how to set up defensive backs, the sky is the limit for him.

If there’s any caveat here, it’s that Goodwin was even more highly regarded when he committed to Auburn and slid just a bit after his senior season and a performance at the Under Armour game that didn’t seem to make many waves; he was at No. 23 in the ESPN 150 last summer and a little higher in the WR rankings of both the other services. But when that slip only means you’re a consensus four-star with Rivals and Scout and still in the top 50 nationally at ESPN, who cares?

That was fun. Say this for Goodwin–on tape he sure as hell looks the part of future college wide receiver, doesn’t he? Have to think he’ll have a shot at the open punt returning job, too.

Not everything went perfectly smoothly during Auburn’s recruitment of Goodwin; a big push from Georgia and a planned visit to Athens led to reports of a decommitment. That “decommitment” lasted all of 48 hours, basically just long enough for Taylor to have a chance to speak to him.

Goodwin is a thin guy with a flair for acrobatic plays, which gives Auburn coaches hints that greatness awaits. It’s not just them — Goodwin received schoalrship offers from all the major SEC programs. He’s fast, but not among the fastest prospects available. He’s quick, but not among the fastest prospects available. He was a steady guy in high school who rarely had problems with drops and never complained about being asked to serve in a variety of roles. Goodwin is reminiscent of Darvin Adams. Rivals.com and Scout.com rate him as a four-star recruit.

Adams? Really? Goodwin strikes me as much more of a deep burner–he excelled on the track, too, winning the 200-meter dash and running on the winning 400-meter relay at the Georgia state championships … as a sophomore. The most recent results I’ve found for him include first-place regional finishes in both the 100 and 200 dash, with times of 10.69 and 21.36, respectively. Goodwin? Is fast.