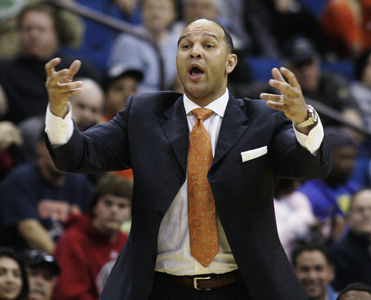 Barbee world. A lack of one-on-one interviews and quotes that haven’t come from behind a podium have meant we haven’t gotten too much candor from Tony Barbee just yet, but this extensive Q-&-A from the O-A News goes a long way towards solving that problem. There’s even more here. Highlights:

— Barbee hasn’t watched a lick of film from last season. “It doesn’t matter,” he said. I guess that makes sense from the standpoint of starting the program from the blankest slate, the scratchiest scratch possible, but I also guess it means that Barbee doesn’t think much of Jeff Lebo’s methods.

— Because “what you ask for is what you’ll get,” Barbee asks “for a whole lot”:

That’s all well and good, and I readily admit I’m picking nits here, but couldn’t Barbee specifically mention asking for a lot in the classroom? Maybe that falls under the “represent themselves on campus” heading, but still, particularly when his self-acknowledged mentor’s team just posted an embarrassingly low collective GPA (and weenied his way out of answering for it) and his previous program posted a substandard 924 APR for this year (link is PDF), I don’t think I’m all that out of line in wanting this to be a major point of reassurance. (I should note that UTEP’s graduation rate under Barbee was fine, right in line with the rest of the Miners’ student-athletes.)

— It’s not too tough to read between the lines when Barbee’s asked about scheduling and responds that his team will need to build confidence: it’s Cupcake City, at least for 2010-2011. And frankly, for a year at least, I’m perfectly OK with that. Barbee’s first squad isn’t likely to be NCAA material regardless, so getting the Tigers’ feet underneath them will be much more important than trying to make a dent in the RPI.

— Interesting quote regarding the hires of assistants:

When I got this job, I all of a sudden had 1,000 new friends in this business that I didn’t know I had. They said to ‘Hire me because I can bring player XYZ.’ But that’s not what I’m about. Family is about loyalty and taking care of one another.

That is a philosophy I endorse 100 percent. It’s impossible to recruit in modern college basketball without wading through at least a little bit of skeeze, but the less we can track into Auburn Arena, the better.

Overall, Barbee comes across as supremely well-spoken and confident, and my classroom quibble aside, there’s precious little not to like. There’s even more at the two links. Check it out.

Lemaybe not. Not much going on on the Auburn krootin’ front, what with the Tiger Prowl kiboshed and a bit of a calm hitting the scene before the storm of Big Cat Weekend 2: Pie-Eating Contest Boogaloo*. Kris Frost is still saying nice things. Tide commitment Brent Calloway is planning on attending BCW2, which is the sort of thing the Coachbot and Co. usually frown on. That’s about it.

Aside, I guess, from QB Christian Lemay’s announcement that he expects to sign with his official leader, Georgia. Certainly not unexpected, but Auburn fans might have hoped to have been one of Lemay’s two additional “finalists”–essentially, the schools Lemay will still visit and consider if the roof caves in on Richt and Bobo this fall. Didn’t happen–Lemay cited Clemson (as expected) and Texas A&M (less expected) in those two slots.

With both Jeff Driskel and Lemay off the board, Auburn’s down to two of their original four quarterback targets–Kiehl Frazier and C.J. Uzomah. The odds remain good, I’d say, that Chizik and Co. will snag at least one of the two (particularly if Malzahn sticks around for another year), but there’s less margin for error now before looking at a Plan B.

Onwards, upwards. Due to a case of Real Life this is the only WBE post for today, and the weekly SEC baseball run differential rankings will have to wait until tomorrow, but no time like the present to acknowledge the baseball team’s massive series win against Arkansas. PPL has your recap and a look at where Auburn stands after this weekend’s SEC action. The fallout:

— I’ve been saying for weeks that Hoover was a done deal, but after taking two in Fayetteville and with Auburn’s closing schedule, it really is a done deal.

— Auburn is is sole possession of third in the SEC West, a game ahead of defending national champion LSU, and the two teams ahead of the Tigers (Arkansas and Ole Miss) play each other this weekend. A divisional itle is absolutely now in play.

— As is hosting one of the eight NCAA Regionals. It’s possible that the season-ending series in Oxford could give the head-to-head winner an inside track on a Regional.

— Helping Auburn’s case is that their three remaining series are at home vs. hapless Miss. St., at home vs. not-hapless-but-not-good Tennessee, and the aforementioned road series at overrated Ole Miss. An 8-1 finish to the season and 20-10 final SEC record isn’t likely–I’d peg 7-2 as the most probable outcome–but it’s not out of the question, either.

BlAUgosphere. You get one guess what Auburn blog this came from:

You guessed correctly. Read the rest at your first opportunity. Elsewhere, here at TWER, Jeremy has a new edition of Bo Bits. Seriously, by this point “Bo Knows Blog” is making the Tim Teblog look half-assed.

Etc. Andy Bitter breaks down the Auburn special teams … catching up with the oft-traveled Kyle Davis.

*I spelled “Boogaloo” correctly on my first try. I’m so proud and ashamed of myself.