When he wasn’t beating Jay Barker and Tide basketball coach Anthony Grant by 3 strokes with a score over 5-under-par on the practice green, Bo spent the Regions Charity Classic at Ross Bridge in Birmingham disappointing all the digicorder’ed interviewers gunning for nostalgia.

My favorite quote (from another video):

“Sport is foreign to me now. My sport is finding my golf balls in the woods,” Jackson said.

“Bo Jackson’s disease” is apparently more than just slang for “talent.” In some circles it’s the “commonly known as” for avascular necrosis, the debilitating bone disease he developed after dislocating his hip against the Bengals that cost him his football career and ruined professional football. When it’s named after you, you know it sucks.

Just Do It, Fashawn: though the only reference to #34 (other than the metatagged badassedness) is the eventual chorus of Just Do It, California rap phenom Fashawn has upped the hip-hop Bo reference ante by naming an actual song “Bo Jackson.”

(Scroll about halfway down to NSFW it.)

Get a room. Bama fans have been gushing nostalgic about the greatest athlete ever in a “How Good Was Bo Jackson?” thread on RollTideBama.com’s message board.

… He was a barner…but a phenomenal back. Once in a lifetime talent and ability. I wear crimson shades, but they are not dark enough to deny his greatness.

… I think Bo is the most physically gifted athlete I have ever seen. So yes, I think he was great.

… Not one thing negative about Bo on any reply. I bet you dollar to a donut you wouldn’t see that on any alburn site about a past Bama players.

… who should we not get negative about… Mark Ingram? Ba’dum Chhh!

Bo-x Score: Some dude with an anime avatar uses the box score of the one time Bo and Deion Sanders squared off to start some intelligent oohs and ahs on yet another basketball message board:

Some quick interesting facts about the game and players:

Both Bo and Deion played the same position, center field.
Bo Jackson hit three consecutive homeruns on three at bats before being injured; coincidently, his injury came on the same play Deion hit an inside the park homerun. Because of the (shoulder) injury, Bo was out of action for 6 weeks; upon retuning, he hit a homerun at his first at bat… hitting his 4th consecutive homerun, be it over a 6 week period.
Bo had 7 RBIs before leaving in the 6th with a shoulder injury, Sander was 2 for 4 with 2 RBIs.
Hall of Fame George Brett was on base for each of Bo’s homeruns.

Broken Memories. The San Francisco Giant’s Aubrey Huff (indeed) broke a bat over his knee Tuesday night and this Giant’s blog, of course, ran with a photo of Bo doing it better. 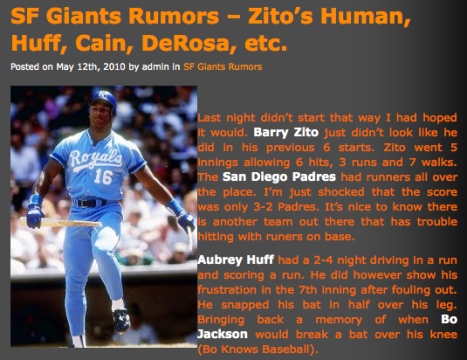 Update, yo. Remember the whole Raiders ‘n’ Rap stuff from a couple of posts back? I apparently forgot to notice that, in the documentary, as he walks with Ice Cube into Memorial Coliseum, Snoop Dogg is actually wearing a #34 Bo Jackson jersey… but that might be the only reference to Bo in the entire film, which this guy has a problem with.