Still THEBo. The Big Lead thinks that, in terms of post-draft pomp and circumstance, Bo ’86 might be the only thing comparable to Tebow ’10.

$75. Eighty-seven Baseball / football cards in plastic sleeves, four rare collector cards in hard display cases, four Starting Lineup figures in the original packaging… a giant collection Bo Jackson memorabilia is up for sale (not by us for once) on AUNation.net. I think the Donruss was my favorite, but I also had a thing for that Bo / Eric Davis sticker card. 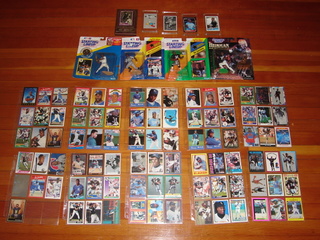 Jacksonville State head coach Jack Crowe is either losing his mind or an easy mark for a quote. Or both.

Auburn’s offensive coordinator during the Bo years, Crowe told the AP reporter writing the story on Ryan “Flash-in-the-pan” Perriloux’s attempt to make the pros after his sorrowful stint at LSU and (of course) record-breaking career at JSU — and I quote — “From a talent evaluation standpoint, he’s right there with Bo.”

“Bo’s the best athlete that’s ever been,” Callaway said. “But I’m going to say this: Joe (Webb) is in that same league with Bo.”

Webb played quarterback for UAB and was the 199th pick of this year’s NFL Draft. To his credit, he respects his elders / betters:

“I remember Bo like it was yesterday,” said Webb, a 6-3, 223-pounder born in Birmingham the year after Bo won the Heisman. “His hometown [Bessemer, Ala.] is about 15 minutes from where I grew up. Everybody knows Bo. Just to be mentioned with him is pretty amazing.”

Jackson was a freakishly athletic superstar, an all-star in baseball and football, and the Nike pitchman who made the words “Bo Knows” a lifelong mantra for people old enough to remember the 1980s and early 1990s.

Webb is a relative nobody trying to become somebody we never forget. Whether he’s successful, who knows? But his size, speed, athleticism and late-round selection make him one of this year’s more intriguing draft picks.

Bo*Jack-son – verb. Kid Cudi took the occasion of Cartoon Kanye West’s appearance on Family Guy to exult on his blog: “Watch us Bo Jackson this sh*t.”

One more time (that clock is on A-Day speed…)

Bo Staff. Growing up, a writer for the Flagler College Gargoyle had two posters on his bedroom wall: TMNT and Bo. The hip injury ruined football for his entire family. For me, just the NFL.