In which a recruit’s name is plugged into Google and the bits of information that trickle out–guru ratings, newspaper profiles, YouTube highlights, all that stuff–are synthesized in the hopes of getting a clearer picture of the player we’ll see at Auburn next fall. Previously: Jessel Curry, Craig Sanders, Roszell Gayden, Brandon Mosley, Demetruce McNeal, Jake Holland, and Shaun Kitchens. 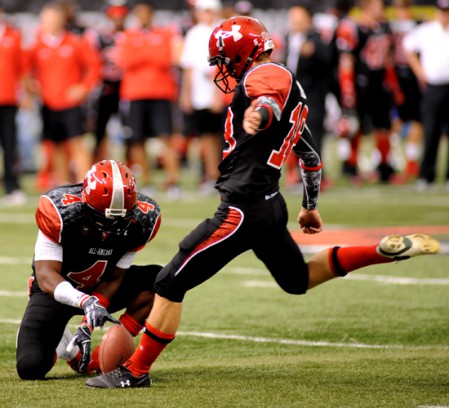 How long ago did Cody Parkey commit to Auburn? The coach who delivered his offer and accepted his on-the-spot commitment was none other than Eddie Gran, who between now and then has coached for three different teams. The head coach at the time was, of course, Tommy Tuberville … who was still 11 days away from leading his team into that 36-0 pasting that more-or-less cost him his job.

So: a long, long time ago even in real time, and even longer in terms of all that’s transpired between now and then. But Parkey’s still here. What he gave to Gran that night really was a commitment, wasn’t it?

BASICS: If there’s any position where height and weight are of utmost importance, it’s placekicker. You’re in luck:

HIGH SCHOOL: Named to the PrepStar All-American team … 2009 EA SPORTS Third-Team All-American … Was 8-of-9 on PATs and 9-of-12 on FG attempts in his senior season including a long of 42 yards … All of his missed field goal attempts came from at least 49 yards … Kicked field goals of 51 and 43 yards during the Outback All-Star game in Palm Beach, Fla.

6-2! Awesome! Seriously, though, hitting everything from 48 yards and in: not bad. Parkey was also second-team All-State in Florida and the 2009 Lou Groza High School Place-Kicker of the Year, which unfortunately sounds a bit more impressive than it is–it’s a local award given out by Palm Beach County folks.

RECRUITNIK HOO-HA: Kickers don’t get a whole lot of love from the gurus, and not without reason, admittedly. When a position can be so difficult to project that some teams forego even risking scholarships on it, you can’t blame them for not wanting to go too far out on that kind of limb.

But if the gurus know anything at all about it, Auburn’s found themselves a good one in Parkey. Rivals doesn’t give kickers four stars out of principle, but Parkey did get three, was ranked the No. 6 kicker/punter in the nation, and was named his class’s most accurate kicker. Scout’s even more enamored, giving him a fourth star (an honor accorded only two other kickers) and ranking him their No. 2 kicker. They provide a quote from kicking guru Chris Sailer:

“Cody is the #1 kicker in the nation. He has all the tools to be a great D1 kicker. Oustanding prospect that will be a star at the next level.”

But among the recruiting services it’s ESPN that actually takes the last step and ranks him the four-star No. 1 kicker in the nation:

He has been ahead of his time for the last three-to-four years. He is a superior ball-striker and the ball comes off his foot clean more consistently than most current college kickers. His field goal height and rhythm is similar to that of an upperclassman in college … He also has tremendous leg strength. His kickoffs are consistently over four seconds and 70 yards. Parkey has been charted kicking off over 80 yards. He has been kicking off the ground for two years and should adjust very well to the college game. His ability to focus helped him win the most outstanding kicker award at Kohl’s National Scholarship camp. He is the most college-ready prospect in the nation.

Commence salivating on the kickoffs note. Not surprisingly with an evaluation like that, ESPN invited him to their Under Armour All-American game. Unfortunately, Parkey struggled in the game itself, missing a 27-yard chip shot (as well as a 50-yarder) and seeing two extra points go awry after shaky snaps–a likely reason he fell to sixth at Rivals after having initially been that service’s No. 1 as well.

Still, Parkey comes to Auburn as arguably the highest consensus-ranked kicker in his class.

Aw, for once I wanted my usual dose of hardcore hip-hop for a soundtrack.

Fun facts from the Palm Beach Post’s original “Parkey commits” post: his brother Doug was the Jupiter kicker before him and split time Cody’s junior year; his Mom’s an Auburn grad, a big reason why the nation’s No. 1 junior kicker accepted Gran’s offer on the spot; his junior year he connected on field goals of 55, 51, and 49 yards. The PBP also named Parkey to their area “Super 11”, resulting in this supremely awesome pic: 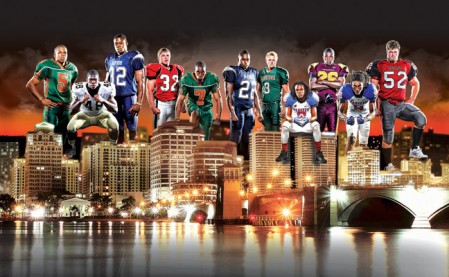 That’s him, fifth from right, ready to DESTROY ALL OF DOWNTOWN PALM BEACH WITH HIS KICKING.

a strong leg, gets great lift on his ball, is mechanically sound, and has a great head on his shoulders. May be the best #1 ranked kicker of all time to come through Chris Sailer Kicking.

Cool. Another kicking guru-type service, Kohl’s Kicking, also rated Parkey their No. 1 for the class of 2010:

Cody was the nation’s 1st D1 offer in the 2010 class. He has proved why at 5 Kohl’s events over the last couple of years. He is a very smooth, coordinated, and powerful kicker. Kohl’s has asked him to take the 1st spot in the Under Armour All-American Game.  Cody was named most outstanding kicker at the 2009 National Invitational Scholarship Camp.  Cody has a rare combination of coordination and leg speed.

More from the Under Armour game box score, where Parkey had a rough day placekicking but did average 64.8 yards on his 6 kickoffs (with one touchback)–or good enough to get the ball to the 5-yard line. Auburn’s season average last year? 62.3.  Parkey also averaged 36 yards over his five punts–he won’t beat out Steven Clark for that job any time soon (we hope), but Auburn could probably do worse, emergency-wise.

Parkey has a couple of quotes in this recap of the Outback All-Star game, where he hit a 51-yarder in his final kick as a Florida high school athlete. Not a bad way to go out.

The Orlando Sentinel worked up a quick Q&A with Parkey, the most interesting part of which is this:

COLLEGE DESTINATION: Auburn. “I grew up a fan, then I loved the campus when I visited,” explained Parkey. “The fans are great because it’s all they care about. I mean, it’s the SEC! It was my top school and the way I see it, once you get that kind of an offer from the school you want, you take it.”

Not only did Parkey take it, he never even began to waver–he never even bothered to record another offer with the gurus, in fact.

Lastly, let’s all take a moment to thank Rivals for finally getting rid of that profile picture that made poor Parkey look like a middle-schooler who’d won a random “get your photo on Rivals!” drawing.

WHAT CONCLUSIONS WE CAN DRAW, IF ANY: No recruit is ever a sure thing, and that goes double for kickers. Hell, they’re not even sure things once they get on campus, as Wes Byrum’s roller-coaster ride from ’07 to ’08 to ’09 so deftly shows.

But that doesn’t mean Auburn shouldn’t spend a scholarship every third or fourth year when they find a kicker they like, and it’s pretty clear why both Auburn staffs like Parkey. When its time to recruit a specialist, might as well make him a good one–and Auburn has been fortunate enough to find one that could be as good as any in the country.

Parkey’s going to have to wait a year to take over placekicking duties, but there’s not a thing standing in his way from taking over the job in ’11–or anything to keep him from starting as the kickoff specialist from Day 1.