OK, I swear. Or Bo knows I want to swear… that this will be the last post with any mention of BoTrainerCrossTecmoKnowsThrowback shoes for a very, very, very long time.

But like that the University of Alabama’s played its first football game against an actual high school team, I just thought that Nike SC Trainers done in baseball glove-brown leatherish-ness (to pay tribute not to Bo: the Just-Do-It Track Man, or Bo: Football god, but Bo: The Baseball Player) and gold stitching and with “Bo Knows, 1989” etched on the side deserved mentioning… for all of you out there in sneaker culture! 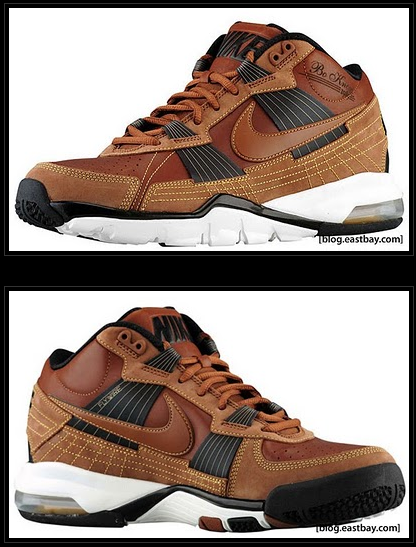 But, oh man… check out the inserts: 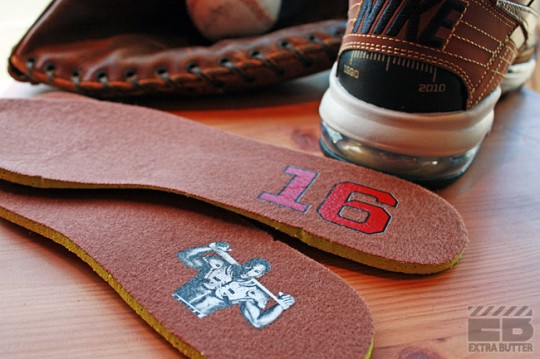 I bet you could run up a wall in these things.

LeBron vs. Le’Bo. Going by “size, speed, strength, agility, coordination, and talent,” an InsideHoops.com message boarder asks his fellows who was the better “physical specimen of the modern era”: LeBron James or Bo Jackson.

This video was frequently cited as the reason why:

Orgel shares with Smith some of his famous football stories, including his relationship with Heisman Trophy winner Bo Jackson when Orgel was an Auburn assistant.

Bo Jackson, who has recently been to see him, autographed a photo to Frank, noting that he was “the best coach to come through Auburn.” An observation about the autograph from Bo, and we were off and running.

An Auburn assistant assigned to “scout” Bo when he was being recruited asked Frank to go with him to watch Bo play. “His coach had him starting at defensive end,” Frank said, shaking his head as he recalled the experience. “Bo touched the ball six times that night and scored five times. That has to be the worst coaching decision of all time.”

Orgel roomed with Pat Dye during their playing days at Georgia.

Still the Favorite. Brian Bradford, a running back / linebacker for indoor football’s Baltimore Mariners lists Bo as his favorite all-time athlete in a Q&A with The Capital Sports Report:

“Mine has to be Bo Jackson. Jackson did what I always wanted to do, which was to play professionally, both baseball and football. He was absolutely amazing in both sports. He was a huge running back with blazing speed. I’m pretty sure that I saw that the NFL Network had Jackson as the 3rd fastest NFL player of all-time. Not only was he great in football, but he was also a great baseball player.”

Christmas Bo-wl. Bo and several others wrote a letter endorsing the idea… so… you know.