Lots of stat-heavy Bostalgia goin’ around right now, which is awesome.

— Bo Jackson chooses to skip college football altogether (which he called a hobby anyway) and signs with the Yankees, who drafted him as a shortstop in the second round of the 1982 MLB draft. He joins Don Mattingly to turn the Yankees into an even stronger offensive powerhouse. Final result: Unfortunately, Bo doesn’t “know” how to pitch, so maybe the Yankees still go ring-less in the ‘80s.

— Bo Jackson chooses to skip his senior season at Auburn to sign with the California Angels, who drafted him in the 20th round of the 1985 MLB draft. The Angels then call him up in September of ’86, and he gives them a bigger lead than 5-2 against Boston in the clinching Game 5 the ALCS. That might keep the Angels from bringing in closer Donnie Moore, who imploded just one strike away from moving on to the World Series, allowing a Dave Henderson home run. The Red Sox would go on to win the next two games, and play the Mets in the World Series. Final result: Bill Buckner is still considered an excellent first baseman, Mookie Wilson might not be a hero in New York and Donnie Moore doesn’t become so depressed three summers later that he shoots his wife three times and commits suicide in front of his kids.

— The Royals, obviously worse off without Jackson in their lineup, end up with the top pick in the 1987 MLB draft. Final result: Kansas City selects a young center fielder from Moeller High School in Cincinnati by the name of Ken Griffey Jr.

There are plenty more. And they’re good. Why hasn’t someone thought of this before?

Duh. Thankfully, a contingent of the ESPN sportswriters charged with crunching the numbers and intangibles for Bristol’s ambitious round-by-round NFL Draft All-Stars project realize that the guy on the right was a better seventh round pick than the guy on the left*:

An originally proposed all-Canton backfield of Leroy Kelly (eighth round, Cleveland, 1964) and Bobby Mitchell (seventh round, Cleveland, 1958) was shelved when some ESPN.com staffers pushed for Auburn’s Bo Jackson (seventh round, Los Angeles Raiders, 1987, after Tampa Bay’s 1986 draft rights expired). Bo’s shelf life was limited by his dueling MLB career and the hip injury that ended his NFL jaunts in January 1991. 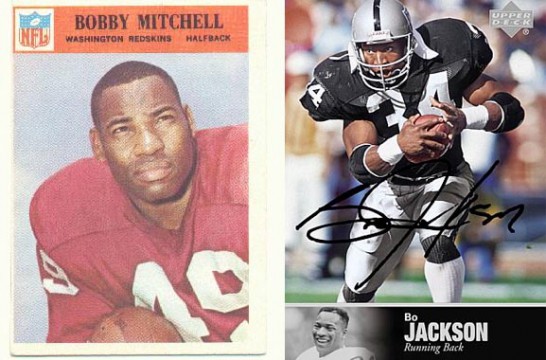 His career numbers (2,782 rushing yards and 16 rushing TDs) don’t hold a candle to either Kelly’s or Mitchell’s. But what the Raiders risked — a seventh-round draft pick — paid tremendous dividends on and off the field for a franchise that was trying to establish a foothold in Los Angeles. After his rookie year, Jackson’s play in a job-sharing role with Hall Of Famer Marcus Allen helped improve the Raiders’ fortunes the next three seasons. The Raiders got great value out of a part-time, one-of-a-kind player, let alone a seventh-round draft pick.

Yes, Jackson never will be enshrined in Canton. Still …

No offense, Bobby Mitchell, but Bo leapfrogged you into our starting lineup.

* With apologies to Thom Gossom, who wore #49 in tribute to Bobby Mitchell, the last, first black player on an NFL team.