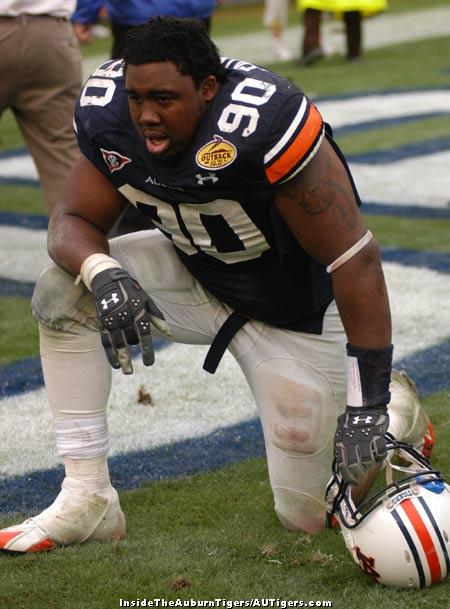 When it comes to spring camp coverage–and whaddya know, said camp started yesterday*–there’s nothing more cliched than listing five “stories to watch” or “problems to solve” or “questions to ask.”

But damn it, I have questions, and I want them answered. So I’m going to ask them over the next couple of days, counting down from No. 5 to No. 1 (take a wild, random guess at that one), and hopefully we’ll all be able to find out the answers together over the next few weeks.

5. IS NICK FAIRLEY READY TO HOLD THE CENTER?

There were many, many things wrong with the 2009 Auburn defense. The depth. The newcomers at safety. The hole at weakside linebacker that was filled for three weeks midseason and then de-filled. I mentioned “depth,” right?

But for my money, the single biggest issue was the lack of run-stuffing in the middle of Auburn’s defensive line. Jake Ricks and Mike Blanc both played to just about the best of their ability, but … that ability was still worth only the 71st-best yards-per-carry against mark in D-I. (For comparison’s sake, the pass defense finished tied for 25th.) Time and again against Arkansas … Kentucky … LSU … and especially Georgia, a strong defensive series or two would be undone by gaping holes in the middle of the line and a quick 5, 6, 7 yards before the linebackers or safeties knew what was happening. Again, nothing against Ricks or Blanc’s effort, but Auburn needs better.

To some extent they should get it from Blanc, who’s got his first full starting season behind him and is entering his senior year. But the real hope here, undoubtedly, is Fairley. We all remember drooling after his debut against Louisiana Tech, but we all also remember cutting back on the drool as Tracy Rocker left him on the second string and his cameos came few and far between over the season’s final several weeks.

The good news is that in 2009 looked for all the world like a guy who’d be ready to break out in 2010. Remember that Fairley had gone a long time without serious football before starting the Tech game; he took a redshirt his second year at JUCO but wasn’t able to make the grades on time to come in for the spring. That he was still ready to make the kind of impact he did speaks to how much talent Rocker has to work with here.

But talent or no talent, we don’t know if Fairley’s going to be the rock in the middle of the line Auburn needs just yet. We start finding out this spring, and if the answer is Yes, everything else already looks a lot rosier.

*Where was I? On the road yet again. But reax to the news developments of that first day is coming shortly.