First up in RPM (that’s Rah-rahs Per Minute), our new series focusing on the vinyl sounds of Auburn Spirit too long relegated to the rotting Shasta box bulk-bins of our thrift stores and garage sales, is this dandy slab of transparent blue vinyl onto which Glenn Tolbert carved a squirrel-catchingly fast bluegrass version of the Auburn Fight Song*. No date, but I’ve got to think this was done – in Muscle Shoals, by the way – in the late, late 70s or very early 80s.

A regular on Birmingham’s gift to television, The Country Boy Eddie Show, Tolbert still has some country-ish cachet — in 2005, one website called him “the fastest picker in Alabama.” That same site shows him autographing a guitar at a performance at the Bama Theater in Tuscaloosa; combined with a an accompanying ad for “Yea Alabama” (“WAR EAGLE” and “YEA, ALABAMA” are the two greatest fight songs in the country—- GIVE THEM A PLAY!”) available from the same “Muscle Music,” that would certainly seem to suggest that Tolbert is either one of those exception-to-the-rule wilderness primitives that swear allegiance only to their state (and, in his case, music), an Athens wholesaler who has never heard of ‘this here football,’ or that he is a business-is-businessman who likely pulls for the Tide.

(The picture on this classic Angelfire “under construction” page shows him in a Braves shirt.)

Cross-Googling his name with “Roll Tide” or “Yea, Alabama” results in nary a link, while a cross-Googling with “War Eagle” turns up a French eBay offering of a personalized, autographed copy of the “War Eagle” record:

While that by no means rules out the possibility that he’s a Bama fan out for hard-earned Auburn cash, something about that “Forever” rings of true belief. 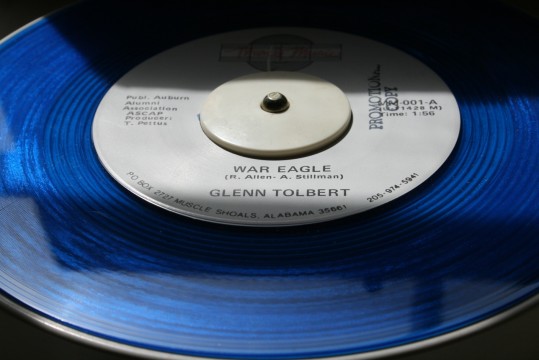 His pickin’ is accompanied by Will McFarlane, a former guitar player for Bonnie Raitt, Jackson Brown, and The Pointer Sisters, eventual CCM liner note mainstay, and current Chapel Hill-area pastor. No indication as to how he leans.

The B-side is a same-styled rendition of Mr. Touchdown U.S.A., a generic if-you-need-one fight song that doesn’t appear to be used by any major university, but I could be wrong.

It’s the only one I’ve ever seen. And it can be yours.

* The rights to the fight song are curiously credited to the Auburn Alumni Association. I don’t think that’s right.

* Behind the scenes of the New York Heisman Tiger Walk
* Crimson White misspells ‘Tuscaloosa’ in front page headline
* Awesome old video shows Auburn (and Chewacla) of yesteryear
* Harvey Updyke in high school
* Could Bieber Fever save the Toomer’s Oaks?
* Toomer’s Corner after Punt, Bama, Punt
* Bo and Me
* Actor’s memoir sheds light on integration of Auburn football
* Bear Bryant’s lost year at Auburn
* The Secret History of Pat Dye Field
* Erin Andrews at Toomer’s Corner
* In the time of “Got 13″ she was a Tiger
* The Auburn player who played for Bama… and Busey