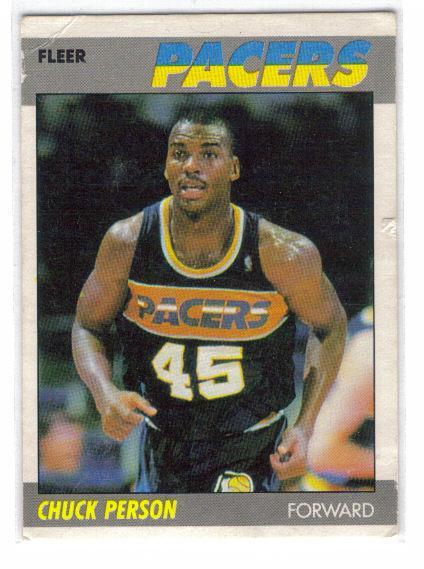 Person for Coach. If Auburn’s new head basketball coach was being decided by columnist vote rather than Jay Jacobs’ interview process, we might already have a winner. Exhibit A, from Phillip Marshall:

Athletics director Jay Jacobs will conduct his search his own way with his own criteria, and that’s as it should be. But I do have a question:

Why not Chuck Person?

The biggest argument against Person seems to be that he does not have a college degree. But that deserves a little closer look.

Person was a good student at Auburn. He went on to become a star in the NBA. Since his playing days ended, he has served as assistant to the president/CEO for the Pacers, assistant coach and defensive coordinator for the Pacers under Rick Carlisle and for the Sacramento Kings under Reggie Theus. He is now a special assistant for the Los Angeles Lakers …

Basketball people I’ve talked to in recent days say Person knows his stuff. He certainly has the charisma to recruit. An NBA pedigree is a big deal to high school prospects, all of whom dream of doing what Person has done.

When Jay Jacobs hired Gene Chizik, one point the Auburn athletic director kept coming back to was that Chizik was the best “fit” to lead the Tigers.

Chizik had the drive, the respect of players and a love for Auburn. As far as Jacobs was concerned, it was a no-brainer.

When he came back to be honored a few weeks ago with the rest of the 1985 team that won the SEC Tournament — taking four games in four days — Person received the loudest ovation out of anyone.

After that halftime ceremony, everyone wanted an autograph or to have their photo taken with him. He was like the mayor of BEMC or something.

Imagine the Tigers’ first game in the Auburn Arena. All the glitz and glamour, all the hype and hoopla, and in the middle of it all, here comes Chuck Person leading the team out of the locker room.

Talk about excitement. The Brantley native comes home to lead the program he helped build out of the doldrums.

The roof might come off that place on the first night.

I’ll admit: it would he a hell of a thrill to see Person lead the team onto the court at the new arena. If he really does have the coaching chops, if recruits really are as drawn to him as Marshall and Svetitz believe they will be, if after 25 years spent away from college basketball he really can adjust to the endless various intricacies of college coaching (NCAA rules, rubber chicken circuit, etc.) … then yeah, it’d be beyond awesome to see him succeed at Auburn.

But that’s just too many if‘s for me. The aching for Person to return after more than two decades in the NBA to relive the ’80s just feels like … well, like this:

Moar hoopsearch. Andrew Gribble has a cool Q&A with a Missouri hoops beat writer focused on Mike Anderson and whether Auburn could pry him away; he doesn’t think there’s a chance in hell. He’s probably right, but I’m keeping my fingers crossed anyway.

Andy Bitter caught up with Sam Mitchell, who’s chilling in Georgia since getting canned by the Raptors and sounds like he’d sure listen to what Auburn would have to say. His thoughts on the similarities in NBA and college coaching are particularly interesting … even if I can’t take his “coaching is coaching” assertion at face value.

You can add Kelvin Lewis to the list of former Auburn players who we’ll get to watch play in the NCAAs for another team. Also sweet.

Besuboru. Rough weekend for the Auburn baseball team, which went on the road to face current No. 1 Arizona State and got swept in painful fashion: 9-8 in game 1, but a combined 24-10 in games 2 and 3. PPL is not happy:

Going in to the season, we all knew the pitching would be a problem. Great starts by Cole Nelson eased those fears a little bit. The return of Cory Luckie helped a bit as well. However, when you take off the orange and blue colored glasses, the fact remains: Our Pitching flat out stinks. That’s the most troubling issue. It’s not just our bullpen, but our starting staff as well. I know it has to weigh on Coach John Palowski, too. Pitching is one facet of the game that he has excelled in teaching, but you can teach all you want, at the very end of the day it’s up to the players.

I wonder if Kevin’s not overreacting just a tiny bit–taking one of three on the road against this opponent would have been fine, and that first game was a nailbiter–but I’ll certainly agree that it’s hard to see big things ahead if the pitching doesn’t improve. Huge SEC-opening series against Georgia this weekend, but there’s also a tune-up against Alabama A&M midweek; Kevin has your preview.

Krootin’. Nothin’ too major, but: Enrique Florence, the safety from Valley who’s slated to be one of the state’s top prospects, has named Auburn his leader over Alabama; Dallas County DE Keymiya Harrell still has Auburn on top even after a visit to T-town; Reese Dismukes, freshly minted Under Armour All-American, is going to either Auburn or Alabama; ditto Sweet Water’s Chris Landrum. Very interesting to see how many of these head-to-head battles Auburn wins.

They’ve sort of lost one already; Danny Woodson Jr., Leflore corner who recently said he thought he was going to Auburn, got a Tide offer and pretty much committed on the spot.  He’s the son of a former Tide quarterback, though. So it goes.

Etc. Speaking of the Tide, they may install FieldTurf at Bryant-Denny because they can’t keep the grass in working order. Am I going to take the cheapshot and ask you to compare and contrast said issues with the quality of Pat’s Dry Field? Yes, I suppose I am  … Tubby’s, uh, still settling in at Tech.