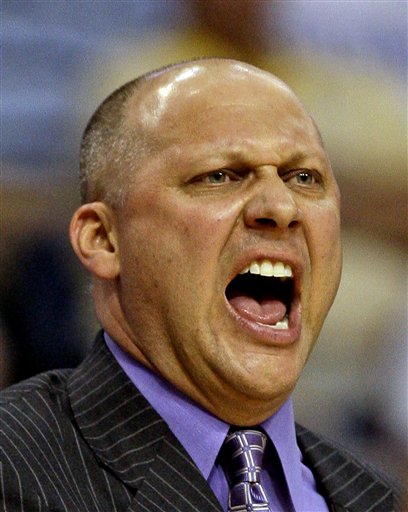 That’s right: years 4 and 6–both teams with rosters entirely recruited by Lebo–both resulted in losing seasons. Sorry, but that’s not enough.

1. Mike Anderson, Missouri. The first thing I’d do if I were Jacobs would be to find out whether Anderson would be at all interested in coming back to Alabama, then find out how much money it would take, then find the money.

2. Gregg Marshall, Wichita St. Built the most rugged mid-major dynasty this side of Butler at Winthrop, moved to Wichita, and has since taken the Shockers from 11 to 17 to 25 wins in his three years there. Still young enough after 14 years as a head coach to do some serious program-building at Auburn … if we can pry him away from WSU. Marshall turned down multiple offers at Winthrop and has spoken frequently about his reticence to move his family.

3. Billy Kennedy, Murray St. Kennedy has been a head coach at three schools–Centenary, Southeastern Louisiana, and now Murray St. He’s taken the last two to the dance and given all three their best seasons in decades. This year’s Racer team is the No. 1 biggest threat to pull an upset out of the 13-or-worse seed line in the NCAAs, bar none … and he’s also way more likely than the first two guys to come to Auburn.

Those are the first three to come to mind; I’d be thrilled with the first two, with Kennedy a solid fallback. Amongst the names I’ve heard thrown around are John Brady and Rick Majerus, neither one of which I’d be excited about; Majerus would immediately improve the team but would be liable to depart at any moment because of his health, and Brady would be the second coming of the Cliff Ellis yo-yo (though hopefully without the probation). Amongst mid-majors, I’m not as high as you might expect on either Butler’s Brad Stevens or Siena’s Fran McCaffrey; the former may be a product of the program (as Todd Lickliter appears to be at Iowa) and the latter’s both too old to provide the energy I’d like and maybe a little fortunate with his perfect storm of MAAC recruits. We’re looking for a sure thing, and those first two guys look like the closest things to me.

Much, much more to come on this over the next few days.

UPDATE: First official media speculation comes from Andy Katz via Andy Bitter: Anderson, Chuck Person, UTEP’s Tony Barbee, UAB’s Mike Davis. You can read my gut reaction to Person and Barbee in the comments, and as for Davis …. eh, wouldn’t be the worst hire in the world, but he’d hardly get my blood pumping, either.

And oh yeah, the school’s made it official with a boilerplate “different direction” quote from Jacobs.