In which a recruit’s name is plugged into Google and the bits of information that trickle out–guru ratings, newspaper profiles, YouTube highlights, all that stuff–are synthesized in the hopes of getting a clearer picture of the player we’ll see at Auburn next fall. Previously: Jessel Curry, Craig Sanders, Roszell Gayden, Brandon Mosley, Demetruce McNeal, and Jake Holland. 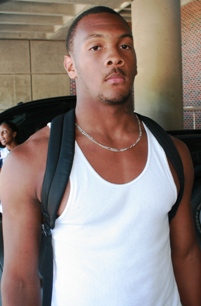 Like Jake Holland, the last entry in this series, Shaun Kitchens served as more-or-less the model citizen of Auburn recruiting. He committed early (as in “committed the same day last April as Holland” early), never even sorta-wavered, and spent most of his multiple visits to Auburn selling the program to the uncommitted visitors sharing the weekend … including Banneker teammate Demetruce McNeal.

HIGH SCHOOL: No. 20-ranked outside linebacker by Tom Lemming on Maxpreps.com … Ranked as the No. 42 player in Georgia by SuperPrep … Named to the All-Southeast Region team by PrepStar … As a senior, named second team Region 5-AAAA as a wide receiver … As a junior, had 23 rushing attempts for 57 yards and two touchdowns, completed 5-of-11 passes for 229 yards and three touchdowns with only one interception and caught 16 passes for 289 yards and two TDs.

That’s right–it’s yet another Auburn recruit who spent some time at quarterback. That “second-team all-region” honor doesn’t seem all that terribly impressive, but I take it as a good sign that Kitchens adapted quickly to a larger receiving role after those 16 receptions as a junior. (Where’s his stas for his senior year, though?)

Also worth noting: 1. yep, he’s a 6-3, 211-pound receiver 2. yep, despite his “athlete” designation to the gurus and jack-of-all-trades role at Banneker, he’s a WR at Auburn. I don’t think, for now, there’s really any point in discussing Kitchens’ potential at other positions; by every account Chizik and Co. wanted him as a WR the day he committed and they want him as a WR now.

However, the listed 40 time for Kitchens–4.65 at Rivals–isn’t quite scorched-earth worthy. That’s fine, of course (did we mention he’s 6-3?), but it does seem like Kitchens is going to at least begin his career as something of a possession/over-the-middle guy rather than a deep threat.

RECRUITNIK HOO-HA: Scout doesn’t really see anything too useful in Kitchens; he’s a three-star, No. 33 outside linebacker. Their scouting report:

Kitchens is a very versatile athlete that could end up at linebacker, defensive end, or even wide receiver at Auburn. He has a lot of athelticism [sic] and could be effective any one of those positions. Naturrally [sic] you look at him and his aggressive nature and think defense, but he could be a big target at receiver as well. He is not a great speed guy, but he is tough, and a true football player.

Yeah, if the bottom line is “could be effective,” they’re not too thrilled. The other two services, though, are substantially more enthusiastic. Rivals gives him a high-three-star grade of 5.7, places him in their top 50 for Athletes, and the top 40 in hotly-contested Georgia. Unlike at Scout, Kitchens was way closer to four stars here than two.

But ESPN is even more impressed … like, way more impressed. They rank Kitchens No. 98 in their ESPNU 150 (i.e. in the top 100 players in the country), call him the No. 10 athlete in the class, and give him a high four-star grade of 81. They basically view Kitchens the way the other services view, say, LaDarious Owens. Their evaluation:

Kitchens is a wonderful athlete with a supreme blend of size, speed and athleticism. We feel he projects as a safety/outside linebacker hybrid initially, with a fulltime move to the front seven in time. He could also play as a physically-imposing wide receiver prospect on offense due to his excellent overall ball skills and offensive awareness downfield … It’s this same awareness that makes him a presence on defense. Displays the ability to generate power quickly and close on ball-carriers with good explosiveness … He is an explosive blitzer both off the edge and up the middle. Shows very good feet, can play off blocks and shows very good closing burst and a violent attitude upon contact. Moves well through the lateral trash avoiding blockers in space with his quick feet and ability to burst under cut-off blocks. Coverage skills and range are very impressive … Overall, it is Kitchens’ measurables that have garnered early attention as well as his ability to run. He does have skills to remain on offense, but he has a brighter future on the other side. He has ball skills and is a playmaker, but may not have the top-end speed for an elite wide out at the next level.

All right, so I guess they’re more excited about his linebacking ability than his receiving potential, but the point remains that they’re very high on Kitchens’ athletic ability. Combine that athleticism with Trooper Taylor’s coaching (and early-commitment seal of approval), and I think you’ll see something impressive.

Admittedly, Kitchens doesn’t have a top-line offer sheet: Georgia Tech, N.C. State, Ole Miss, West Virginia, Kentucky. Then again, given how early Kitchens committed and how little attention Kitchens paid to any other schools after that commitment, it’s fair to assume he might have earned a few more down the stretch if he’d been on the market.

Wait … are we sure we want him to play wide receiver?

There’s surprisingly little useful information out there on Kitchens. But here’s what I’ve got:

— Kitchens was named to the Atlanta Touchdown Club’s All-Metro team … as a defensive back.

— ESPN noticed when he caught two touchdown passes in a Banneker rout back in September.

— Right about this time last year, Kitchens appeared to be highly intrigued by Tennessee, who had yet to offer him. At the very least, he got Vol fans reminiscing about Freddie Kitchens. You’ll notice at the AJC link that he also pulled a Duke offer; grades won’t be an issue with Kitchens, it’s fair to say.

— I’m still kind of wondering what it meant for Kitchens that his coach basically said Demetruce McNeal was the better athlete, but Kitchens still got his photo in the paper.

— Not actually a Kitchens link, but if you’re worried about his statistics, I’ll remind you that Kitchens doesn’t play in the sort of high school league where you’re going to rack up a lot of receiving yards.

Unless you’re interested in reading Bleacher Report wrap-ups of Auburn’s recruiting class, that’s about it.

WHAT CONCLUSIONS WE CAN DRAW, IF ANY: Let me ask you something: do you think Gus Malzahn’s offense could have used a guy who was slightly smaller than Tommy Trott but far more athletic?

Because that’s how I see Kitchens. Trott spent so much time split out, it was barely worth calling him a tight end; his primary use was as a blocker and on the occasional seam route. Kitchens could do both those things and be an even more agile blocker and offer even more of a deep threat and potentially be a huge weapon over the middle. There’s no question in my mind there’s room in this attack for a tall, thick, possession receiver who can get out and mow over corners on runs and swings to the edge.

And there’s not much question, for me, that Kitchens could be that guy. He’s got enough athletic potential to do a lot of other things; if Auburn’s coaches believe that’s what he’ll be best at, I feel plenty confident in saying that he’ll be plenty good at it. (And if he’s not … there is always linebacker.)