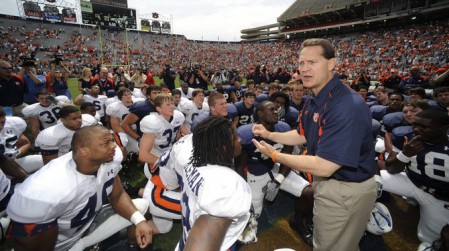 I’m tempted to lead this section off with a paragraph about team unity. After the splintered horrors of 2008–with its rifts behind the quarterback situation, the open disgust from the players with the offensive coordinator (and the losing), the well-documented conflict between the offensive staff and that same coordinator–sometimes I think Gene Chizik’s greatest accomplishment was persuading the Auburn program to rally to the flag he’d planted. The defining moment of the 2009 season was either the win over West Virginia or the Last Stand (so to speak) against Alabama … but if you want to argue it was Burns’s speech in front of the team–the point at which it became clear how wholly Chizik’s charges had bought in to playing for Auburn, rather than themselves–then I sure won’t stop you.

Still, the point of this exercise is to grade on on-field results alone. Fortunately for Chizik, those weren’t half bad, either. From a head coaching standpoint, what we’re looking for is: Was the team prepared? Was the team focused? Did they play up to their potential? These are more subjective questions than the ones we’d ask for the coordinators, which are more along straight statistical lines, i.e. how many yards and points did Auburn gain/allow. But for the most part, the answer to those questions for Auburn in 2009 was a solid Yes.

Against the three truly lesser foes on Auburn’s schedule–La. Tech, Ball St., and Furman–the the Tigers dispatched the latter two with all requisite ease and saw off the first by 24 points after the typical season-opening jitters. Against the two roughly Auburn-equivalent nonconference teams, the Tigers earned two victories despite facing long odds at various stages of both; keeping the team’s confidence together despite the rocky opening against WVU was particularly nice work on Chizik’s part.  Against the two lesser SEC teams, Auburn laid one egg but also overcame a slow start to obliterate Miss. St. in a fashion even Florida could not. Against Auburn’s peers in the middle of the SEC pack, Auburn was on the road all three times–and won one of those games in fairly comfortable fashion and lost another on a dropped pass on the goal line. (The other we’ll get to in a sec.) And lastly, I’d say Auburn played three games against teams with a fairly substantial talent advantage: LSU, Ole Miss, and Alabama. The first of those three was severely disappointing, yes, but the other two represented the most critical win of the season and an effort that will remain worthy of a standing ovation forever.

Add it up: nine quality performances, one that was OK-to-good, and three that were lacking. Not a bad ratio, that, and one I think that would look better than most of Tubby’s if we ran through them the same way. Remembering, too, that Chizik wrung those performances out of a team with substantial limitations in terms of its personnel and in the first year of a coaching transition, and it’s even more impressive.

We can talk all day long about how angry or not angry you want to be about the three midseason egg-layings, but there’s no doubt that those were three Tuberville-quality eggs. Seeing them back-to-back-to-back like that was especially dispiriting; responding to the Arkansas game with the Kentucky game was bad, and responding to the Arkansas and Kentucky games with the LSU game was even worse. In the future, Chizik will have to get the train back on the tracks in a week, not three.

From the head coaching standpoint, it was also disturbing to see how poorly Auburn played with a lead. If Chizik deserves plaudits for the comebacks against West Virginia, Ole Miss, and Mississippi St., he also deserves serious demerits for watching big leads evaporate against Georgia, ‘Bama, Northwestern, and even Ole Miss and Tennessee to a lesser extent … not to mention the smaller lead against Kentucky. Auburn has many chances to step on the throat of quality competition, and with the exception of Miss. St., they never did. That inability to keep the pedal down falls on Chizik’s shoulders.

For a team with Auburn’s talent level, it’s my opinion that 8-5 with the wins over Tennessee and Ole Miss and the near-miss against the national champions wasn’t bad at all. Auburn had more games and more moments where they played over their heads than played under them. That’s what we want to see from our head coach and his staff.

But not far more. Nine wins was there for the taking, against Kentucky, against Georgia. It didn’t happen. I’m happy with Chizik’s on-field performance in his first season … but I’m also not quite thrilled. With a year under his belt and the victories on the recruiting trail, I suspect I will be down the road. But not yet.