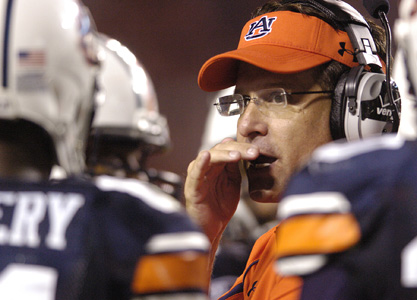 It’s Friday. This is gonna be quick:

Offensive coordinator Gus Malzahn is receiving the biggest percentage raise, a 43 percent hike that will bring his salary to $500,000 a year. All the other assistants are receiving 10 percent raises, The Birmingham News learned.

Chizik’s compensation will increase to $2.1 million from $1.9 million annually …

Anyone want to make the argument these raises weren’t entirely deserved after the season and recruiting cycle we just enjoyed? Didn’t think so. Also important: taking care of the assistants you’ve got should make it easier to hire replacements if and when the time comes.

Swim for victory. The Auburn men hold a narrow lead with the women in third entering the third day of competition at the SEC swim championships. The Tigers won a total of four event-specific SEC titles. Hopefully we’ll see a post here this weekend celebrating the men’s latest SEC title.

You get one guess as to whether the YouTube commenters are pleased with the (awesome) music selection. Elsewhere, Beaver has his watch-list for 2011 defensive recruits up. I’m particularly interested in Xzavier Dickson, the first athlete I’ve known who’s actually spelled that name the way they want it pronounced. Good for his parents.

Etc. Three words: Best. Mascot. Ever. … Cam Newton is one of Rivals’ impact JUCOs, but “relatively raw” as a passer isn’t really what we want to hear, unless we’re Neil Caudle (via) … Luke Brietzke starts a countdown of 10 “under-the-radar” Tigers to know with Jessel Curry.

Enjoy your weekend and go U.S.A.