In which a recruit’s name is plugged into Google and the bits of information that trickled out–guru ratings, newspaper profiles, YouTube highlights, all that stuff–are synthesized in the hopes of getting a clearer picture of the player we’ll see at Auburn next fall. Previously: Jessel Curry and Craig Sanders. 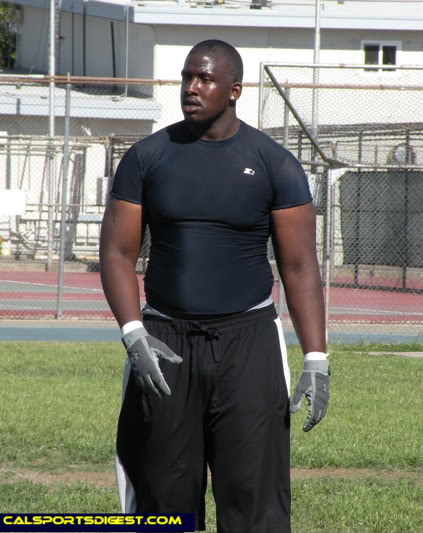 Auburn’s coaches never made it much of a secret: they wanted a big JUCO lineman for the 2010 class, they wanted him in for spring practice, and they wanted him ready to compete for the open right tackle spot from the moment he got on campus. Basically, they wanted Roszell Gayden, wanted him so badly Gene Chizik his own self apparently drove through a Minnesota blizzard for a shot at his signature.

Good thing they got him, huh?

BASICS: You can just about boil down Gayden’s appeal to Auburn to just 10 characters from the official Signing Day bio sheet:

But it didn’t translate to a lot of recruiting attention or local awards coming out of that noted recruiting hotbed of New Hope, Minnesota; the only honor listed on the bio sheet from Gayden’s career at Robbinsdale Cooper HS is an honorable mention from the North Suburban Conference his junior year. (Though he may have made All-State his senior year; not sure why that bit of info was left out the second time around.)  If Gayden hadn’t wound up at the College of the Sequoias in Visalia, CA, we Auburn fans never would have heard his name.

Position-wise, Gayden played left tackle for C.O.S. and certainly has the size to play there at Auburn if need be … but the consensus has also been that he’ll start out on the right as Jeff Grimes looks for a replacement for Andrew McCain.

Gayden has three years to play two, but it’s hard to see anything but an injury forcing a redshirt.

RECRUITNIK HOO-HA: In keeping with the lack of All-State/Region/Whatever citations during his high school days, Gayden was hardly a hot prospect coming out of Robbinsdale-Cooper. Minnesota and Cal were Gayden’s only listed offers; Rivals ranked him a low-rung three-star and the No. 69 tackle*; Scout also assigned him three stars and called him the No. 58 tackle. ESPN was a little more optimistic, placing him among the top 50 OTs with a standard-issue “77” grade, and giving him the following evaluation:

His weight on paper makes him look light, but on film he looks to have a good build and should be able to add more bulk in college. He is a productive player that has a good motor for a big guy … He will flash the ability to take a good first step and generate some power from his lower body and drive a defender off the ball. You would like to see that more often … When he gets hands on he can be tough to beat, but needs to be lower. He moves well, but needs to improve his initial steps as he will hop or stand straight up out of his stance. Right now he is relying too much on upper body strength and will not be able to get away with that at the college level. … He has good upside as a pass blocker … He can deliver a blow that can knock a rusher off course. He tends though to rely too much on that punch and will at times just plant and look to deliver a blow … Gayden is a prospect with some upside, but … (h)e is bigger than most of his opponents right now and is able to get away with pushing them around. He has the tools, but needs to learn size alone will not be enough at the college level.

In the eyes of the gurus (and college coaches), Gayden learned a lot in his time in Visalia. He wound up as one of Rivals’ top junior college prospects for the class of 2010, checking in as the No. 11 JUCO, with four stars and a grade of 5.9. At Scout, Gayden also drew four stars and was listed as the third-best offensive lineman in the JUCO class. His offer sheet likewise blew up: Cal, Oregon, Arizona St. out west, Tennessee, Ole Miss, Arkansas from the SEC, Oklahoma and Miami for good measure.

Put it all together and Gayden is the second-most coveted prospect of Auburn’s four JUCOs … and would be first most years, and first now if not for a certain ex-Gator quarterback.

LINKS OF POTENTIAL INTEREST: Highlights ahoy (audio SFW, since there isn’t any):

For being an offensive lineman, Gayden has a wide variety of Internet film to choose from: you can also check out some sophomore year highlights (the ones above coming from his freshman season) and a reel from the Auburn official site.

Now, as we all know, recruits choose Auburn for the connections they forge with their coaches and teammates, the family atmosphere that surrounds the program, the terrific school and community, and no playing time doesn’t have anything to do with it why would you even think that …

Gayden says a few factors are going to play into his decision. “Immediate playing [time] and great academics, I want to play on a big stage,” he said.

He says all the schools that are recruiting him have told him he can start right away. “I was at Auburn this weekend and everybody from the fans to the athletic director was telling if I come here, I’ll start immediately,” said Gayden.

Oh. Well, whatever. The important thing to take away from that article (lifted, I think, from the Cal Scout site): Oklahoma wanted him and wanted him badly. (Also, I have to imagine that getting to eat Thanksgiving dinner at Jeff Grimes’ house did play some part in his decision.)

Another interesting point mentioned in the above is that Roszell has a twin brother, Rashad. Unfortunately for Rashad and fortunately for Auburn, it was Rashad that drew the short genetic straw:

Linebacker Rashad Gayden is 6 inches shorter than his twin brother Roszell, and the lineman can’t explain why he’s so much taller.

“I don’t know, I don’t know I guess I had the good luck on my side,” said Roszell.

Its a spurt he’s been waiting on for a long time, because even as new borns, their father could see the difference.

“When I first saw them, one was much longer than the other,” says their father Rossano Gayden.

Tough break, Rashad. (Though he certainly managed to land on his feet: after playing with Roszell at C.O.S., he signed a D-I offer at San Jose St.)

I’m not sure why exactly Gayden (Auburn’s Gayden) chose College of the Sequoias as his JUCO destination, but it makes sense when you consider their nickname …

Add Roszell Gayden to the list of College of the Sequoias football All-Americans.

“In his two years as a starter he didn’t give up a single sack,” COS coach Curtis Allen said about Gayden when he signed with Auburn. “He was a beast, but he was a better person. Everything we asked of him, he did.”

Auburn signed a Giant All-American who didn’t give up a sack in two years. I’ll take that.

But we probably shouldn’t get carried away. Like, say, the rabble at Bleacher Report:

The massive JUCO offensive tackle will battle Lee Ziemba for the left tackle spot that Ziemba has held since he was a freshman. If he does not win that position, he should slide seemlessly into the open right tackle spot.

Look, I’m thrilled to have Gayden aboard, and if Ziemba hurts himself, maybe Gayden’s the guy who takes over. But if Gayden straight beats out Ziemba for the starting left tackle spot, I’ll paint my car crimson.

WHAT CONCLUSIONS WE CAN DRAW, IF ANY: I can’t say I think Gayden is quite a lock for that right tackle spot. It’s possible that Bart Eddins wedges his way into the starting lineup at right guard and shifts Byron Isom out to tackle. It’s possible that fellow JUCO newcomer Brandon Mosley–6-6 and nearly 290 pounds himself–will have a say in the matter. It’s even possible that Shon Coleman is even further along than we expect and ready to go from Day 1.

However: if Gayden isn’t a lock, I damn sure think he’s the favorite. He’s huge. He’s strong. He’s got guru approval. (From Scout, specifically: all four prep or JUCO players Auburn signed last year with four or more stars from Scout–Washington, Freeman, Fairley, and McCalebb–wound up as major contributors.) Bob Stoops and Jeff Tedford wanted him for a reason. Most importantly of all: Gene Chizik wanted him for a reason. And, on top of all of that, he’ll have all of spring practice to get himself ready.

It wouldn’t shock me if someone besides Gayden was Auburn’s starter at right tackle to open the 2010 season. But would it surprise me? Yes. Yes, it definitely would.

*As an aside, how different is recruiting in Minnesota vs. recruiting the South? Gayden’s profile coming out of high school would have made him lucky to crack the Alabama top 40 … but in Minnesota, he was the No. 7 recruit in the state.