In which a recruit’s name is plugged into Google and the bits of information that trickle out–guru ratings, newspaper profiles, YouTube highlights, all that stuff–are synthesized in the hopes of getting a clearer picture of the player we’ll see at Auburn next fall. Previously: Jessel Curry, Craig Sanders, and Roszell Gayden. 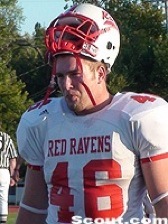 There were a dozen commitments over the course of the class of 2010’s recruiting cycle that told us “Hey … something special’s happening here,” but of those, maybe none has gotten less long-term mileage than Brandon Mosley’s. Mosley didn’t spend much time on the Auburn radar screen beforehand, was somewhat overshadowed by Roszell Gayden’s commitment the same day of his own, and saw the talk quickly shift to Cam Newton’s decision in the days that followed.

But it bears repeating: when last December’s mini-Signing Day dawned, Mosley was supposedly leaning towards Ole Miss … if he wasn’t leaning towards Florida St. By that afternoon, though, pictures of Mosley in an Auburn cap were all over the place. And we knew once again that, hey, something special was happening here.

Mosley’s commitment was more than just another milepost for Chizik and Co., though, seeing as they used one of their precious five early-enrollment slots to bring him aboard (and eventually had to part ways with future LSU signee Ken Adams to do it). Here’s why:

BASICS: What position does Brandon Mosley play? Looking over his AUfficial Signing Day bio, it’s almost easier to tell you what position he doesn’t play:

JUNIOR COLLEGE: In 2009 played mostly defensive end during the first half of the season and tight end the second half … Named to the All-Jayhawk Conference team as a tight end after having 12 catches for 229 yards and two touchdowns … Defensively recorded 35 tackles, including 4.0 for loss and 1.5 sacks.

HIGH SCHOOL: Named to the Class A All-State First Team as a tight end as a senior … As a senior was also an all-region linebacker and punter, while earning all-region honors as a basketball player … Was an all-region tight end during sophomore campaign.

So, if you’re keeping track, that’s tight end, punter, linebacker, and basketball star in high school, defensive end and tight end in JUCO, and the first position listed for him at Auburn is … offensive line.

Which makes some sense, given that he’s listed at 6-6 and 285. Assuming his days of linebacking and defensive end-ing are done, Auburn’s got two very appealing options here: either a colossal tight end to mow opponents down on Malzahn’s various running plays on the edge, or (more likely) an offensive lineman with a lifetime’s worth of TE/LB/hoops-honed agility. I’ll take either.

I’ve seen Mosley described elsewhere as having three years to play two, but I’m not sure that’s right; he took a redshirt his first year at Coffeyville, and I think the overall five-years-to-play-four rule means he’s only got two years at Auburn. Better put ’em to use.

RECRUITNIK HOO-HA: It’s hard to believe given Mosley’s size and wide range of high school honors, but he was a total nonentity coming out of Jefferson in 2007; neither Rivals nor Scout nor ESPN bothered to even give him a profile. So the blooming for Mosley did come late.

But hey, better late than never. ESPN doesn’t bother with JUCOs, but Rivals was plenty high on Mosley: four stars, a 5.8 rating, the No. 19 spot on their ranking of the class’s best JUCOs. Scout was less enthusiastic, giving him three stars and ranking him the fifth-best tight end in JUCO.

That might be troubling–after Scout’s enthusiasm for Demond Washington and Nick Fairley and lack-thereof for Taikwon Paige last year, I tend to trust their opinion more when it comes to JUCOs–if not for two mitigating factors:

1. The offer sheet. Maybe snagging an Ole Miss offer isn’t a huge deal (the Rebels still offer a lot of kids), but serious pressure from Florida St. and a half-dozen total BCS offers–Arkansas, Arizona, the Kansas schools? That’s not too shabby.

2. Since both services are ranking him as a tight end, neither’s evaluation is going to hold a lot of water if Mosley does make the switch to the offensive line.

LINKS OF POTENTIAL INTEREST: No embeddable video, unfortunately, and while there’s a link to film on the Signing Day bio sheet, I’m not able to get it to load. Maybe you’ll have better luck.

Mosley made his signing announcement back at his old Jefferson High stomping grounds, occasion enough for the Athens Banner-Herald to look at Mosley’s winding journey to Auburn:

Through his four years at Jefferson, Mosley made an impression as both a talented player and a workhorse.

“He was a ball of energy,” Corbett said. “He has a motor that doesn’t quit. Until you told him to stop, he wasn’t stopping.”

Mosley graduated from Jefferson in 2007 and was named to the 2006 All-Northeast Georgia second team as a tight end. He then became the only player from Georgia on Coffeyville’s roster.

“He was out there with Toto and Auntie Em,” Corbett said, referencing the Wizard of Oz, which is set in Kansas. “He really stepped out of his comfort zone. He made a decision that he felt was right for him.”

He was redshirted during his freshman year at Coffeyville and started having doubts about whether he made the right choice going to Kansas. He started to consider returning to Georgia and attending a school like Valdosta State.

“It was very tough. I was desperate just to play,” Mosley said. “It is totally different (than Georgia). There are no trees. It is just flat and there is nothing to do.”

His coaches convinced him to stay, telling him that he would receive plenty of playing time and plenty of attention. They were right.

The Kansas Tourism Bureau would like to have a word with you, Mr. Mosley.

Aside from that well-worth-your-time profile, substantial Mosley links are few and far between, unfortunately. Chizik did say his “potential is unlimited” on mini-Signing Day. He received the Reb Russell Memorial Football Scholarship Award from Coffeyville after last season. He had a doppelganger playing safety at Indiana. Andrew Gribble believes Mosley is a “frontrunner” for quick playing time and makes his list of five “immediate impact” 2010 recruits. Previewing the 2007 Jefferson Dragons was in many ways an exercise in how they’d replace Mosley.

Knowing that Mosley hails from outside of Athens and has surely seen his fair share of Dawg home games, this quote is much appreciated:

Brandon Mosley, a defensive end prospect from Coffeyville Community College (Kans.), named Auburn one of his favorites after his visit last weekend during the Iron Bowl.

“They are up there, probably No. 1. It was awesome. It was big-time. It would be awesome to play over there. I’ve been to a few Georgia games, but I haven’t seen anything like that.”

The Iron Bowl? No, it’s not a surprise you haven’t.

WHAT CONCLUSIONS WE CAN DRAW, IF ANY: If Mosley was a ball, he’d be in Jeff Grimes’ court.

For all his versatility, at Mosley’s size–285 pounds?–it’s hard to see him splitting out wide into that Tommy Trott/Phillip Lutzenkirchen role on Auburn’s offense. He’d have to line up as a more traditional tight end, at the end of the line, and though Malzahn’s used that kind of player regularly at Tulsa we didn’t see much of it last year. Everyone’s in agreement Mosley was recruited to Auburn to patch the ugly holes in the projected 2011 offensive line, and Grimes now has a huge, agile athlete with which he can do just that.

And the guess here is that he will. Between Mosley’s transition to the offensive line and the four incumbents, I’m not seeing more than a backup role for Mosley in 2010, but give Grimes a spring, a fall, and another spring to work with an athlete with Mosley’s combination of size and skill, and you have to think he’ll come up with something. Specifically–given that at least four spots will come open–a starter. Where on the line, I wouldn’t dare a guess (tackle seems more crowded, so maybe he’ll be quick enough to play guard?) but I’ll be surprised if he doesn’t end up on the first-string somewhere.