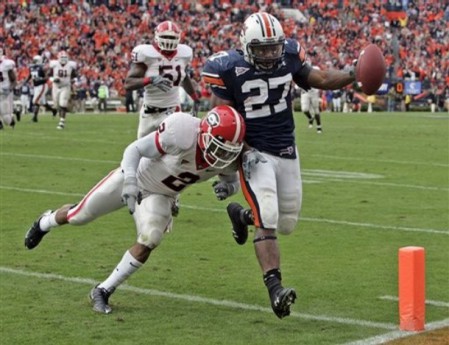 I’ll start by saying this: I’m beyond psyched about the Michael Dyer era. I said on Signing Day we was my personal choice for “Most Excited About” for the class of 2010 and repeated that yesterday. That Chizik and Co. (allegedly) made him the No. 1 prospect on their board means something. Between 1. his massive natural talent and 2. the fact that running backs (as a rule) have fewer struggles transitioning from one level of football to the next than players at any other position, it won’t surprise me a bit to see him take over as Auburn’s starting tailback as soon as this fall.

But it also won’t surprise me if that job falls to Dontae Aycock. Aycock drew nothing but compliments from Curtis Luper during his redshirt year, and those who have seen him practice say he has every bit of the Tate-like blend of power and speed Rivals said he had when they ranked him in their top 200 overall for the class of ’09. As the experiences of Darrell Scott in Colorado and Enrique Davis in Ole Miss (and, all right, Mark Ingram at Alabama) have shown us, sometimes it’s not the glittering All-Everything RB recruit that winds up the best option, especially when you’ve got a solid talent like Aycock around.

All of that said: I was very happy to read the following tidbit (available via not the article itself but a photo caption … thanks!) from AuburnUndercover’s interview with Gus Malzahn:

Mario Fannin will work at tailback in spring practice

Obviously, “will work at tailback” in the spring is a far cry from locking up “will start at tailback” in the fall. Fannin knows the H-back position well enough that he could be swapped back at a moment’s notice. But that Malzahn wants to start his preparation for the 2010 season with Fannin as his offense’s primary ballcarrier is an encouraging start.

Because when all is said and done, I believe Mario Fannin will be Auburn’s best option as their starting running back in 2010. For all of the Malzahnian Spread Eagle’s versatility, tricksyness, and wealth-spreading, last year showed us that everything it does will start in the most traditional fashion possible: identifying a bell cow in the backfield and feeding him the ball until the opponent breaks.

We believe Dyer and Aycock have that kind of potential. But we know Fannin has it. For three years, we’ve been fed tantalizing glimpses of Fannin’s immense talent: the breakout against South Florida in ’07 (undone by those fumbles), the screen pass dash to the house against Georgia in ’08, the game-changing weave through an entire damn Mountaineer defense in ’09. We’ve seen these kinds of explosions despite the fact Fannin’s only received a handful of touches a game; what happens when he starts taking a handoff 20 times a night?

What I think happens is that Fannin finally has the kind of season we’ve always known he could have, the same way Tate finally went from a “good, not great” player holding the likes of Fannin back to Auburn’s offensive MVP and an all-time great, all in the course of a year. What I think is that Auburn’s tailback position becomes even more explosive than it was last season. What I think is that Auburn never truly misses even a player as great as Tate.

Of course, that’s just what I think, and that doesn’t count for much. If Auburn’s coaches tell me this fall that Dyer or Aycock are the right choice as our starting tailback, you’re not going to hear a word of dissent here. But I’ll admit that the choice that will really get my orange-and-blue blood pumping is our fifth-year senior, the guy who’s paid his dues and looks best poised to me to reap the rewards. Why am I glad to hear that Fannin’s going to get his hands on the tailback job in the spring? Because I don’t think he’s going to give it back.