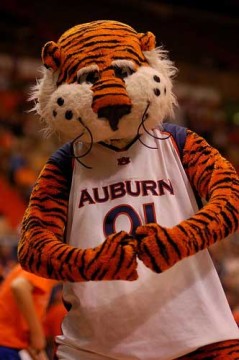 … will it be a meltdown for our Tigers? Will Auburn hold on? (Not to toot my own lucky horn here … but this will be the third game I’ve got to see … Auburn won the other two vs. LSU and Virginia.)

Is this live blogging a waste of time since it is a last-minute, unannounced exercise in futility? Let’s find out … together.

Where it stands at the half: Auburn hasn’t trailed the entire game. The score? 43-32. According to our SEC Network announcers, the Tigers are 7-0 this season when leading at the half.

How is this happening? Vandy is a HOT team coming into this game. A lot of folks have been throwing around their name as a dark horse in the SEC. A team that will probably be playing in the NCAA tourney. A team to beat.

How the hell is Auburn out rebounding Vandy 21 to 10? 21 to 10!!! They look like giants under the board! But … they look slow and unresponsive so far. Auburn is flat-out playing better.

“Cool Hand” Luke Hargrove (my boy!) is rolling with 12 points.

One thing I’m worried about … and we’ll see where it takes us in the second half: 4 points from the bench for Auburn; 8 points for Vandy.

The buzzer sounds. And here we go: THEE SECOND HALF.

16:31 — Easy points inside by Auburn and then answered quickly by Vandy. Twice. 46-43. Vandy has worked it inside for easy looking buckets. Auburn has just called time out.

(Maybe this was a baaaaaad idea.)

11-2 run and Vandy has pulled it in close. 4 points separate these teams now.

Auburn fouled. Hit this free throws Auburn! 1 in … and that’s 2!

Let’s see if Auburn can stop Vandy from working it in to Ogilvy again. He has 4 points this half so far from underneath buckets.

Hargrove fouls and Vandy scores too. Drains the free throw and the Tigers only lead by 3 now. 49-46. Sullivan called for the charge on the other end. Oh no!

6 points for Ogilvy in the second half.

Auburn’s Sullivan fouls after the Tigers score on the other end. 53-48 with 13 minutes left in the game.

The crowd is loud and back in the game. Hargrove throws it away. Auburn leads 53-50 but the momentum is swinging toward Vandy.

Pull it together Tigers!

Vandy takes the lead with a 3-pointer … and my live feed goes out.

Tech difficulties by the SEC Network … fixed. Vandy has the lead 55-53. Vandy is playing physical and tough now.

Auburn’s Armstrong is fouled and will go to the line. TV timeout. Whew. (This is my very first time doing a live blog. It is coming off like I’m not giving very much insight and just a rundown of points scored. Sorry about that. Tough to keep your eyes on the game, think about relevant stuff and type at the same time.)

Auburn is playing sloppy ball and is being out-rebounded like crazy now. Making 1 of 2 free throws does not help.

Vandy with the ball and a 1-point lead. And my ESPN360 feed keeps going in and out! Flying blind now and waiting …

ESPN360 is still not working … dang. Clearly, I’ve jinxed the whole thing. Why oh why did I decide to do this?!

Vandy is pulling away … 61-54 … It’s the Jeffery Taylor show for Vandy. In 30 seconds time Taylor has an assist, a steal and two points at the other end. Four Commodores are in double-digits now.

Tech difficulties continue apparently … but it is 63-58 Vandy with a little over 7 minutes left.

5 minutes left … Vandy up by 9 after AUBURN MISSES BOTH FREE THROWS. You are killing us Tigers!

“This team [Auburn] is a little gassed.” You think?

Auburn is ice cold folks. DeWayne Reed has been quiet this half. Totally opposite of his outstanding performance in the LSU game.

Auburn down by 9 with 3 minutes left.

Cool Hand Luke drains one free throw … misses the next … Auburn misses the easy bucket … Vandy passes it down for an EASY SLAM DUNK.

2 minutes left. Ogilvy is fouled and at the line. Auburn is down by 9 again.

(Hey! This was a success for me since Alex P chimed in. This wasn’t for naught after all! Cheers! Alex P!)

Ogilvy with another bucket and a huuuuuge block on the other end. That dude is pretty amazing.

Ogilvy fouled by Auburn. Misses his first … misses his second. And Vandy is fouled again with 47 seconds left. Put a bullet in its brain!

Sloppy. Just sloppy. This second half is painful to watch. Thankfully it will all end soon.

Whatever dust had settled on Vandy because of not playing for a week … clearly they shook it off and strangled Auburn in the second half.

I’d definitely do this again. (Maybe with a lot more notice next time?) If anything this can be a placeholder for comments about the state of Auburn b-ball. Have at it!

I was foolish to think that Auburn would be able to win 2 back to back on the road. Playing Kentucky tough at home and then going on the road to beat LSU … (then whipping Vandy in the first half) I guess the Tigers had to coming crashing back to Earth sometime.

Vandy doubled the Tiger’s four steals … Vandy had 5 blocks to Auburn’s one block.

Good luck the rest of the way to Vanderbilt. They look like they could be giving the Vols and Wildcats a run for their money in the SEC East. They are now 4-0 in SEC play … but the have to play at Tennessee four days from now. Huge, huge game.

Auburn (1-4 in the SEC) now goes back home to play a #24 ranked Ole Miss team and then another home game against a Bama team that knocked off Miss St. this afternoon. Ole Miss has a 3-2 record in the SEC with a loss coming to Miss St. at home and and overtime loss at Tennessee. (Both great teams.) It doesn’t so look good for Auburn. Can Auburn take one of those games?