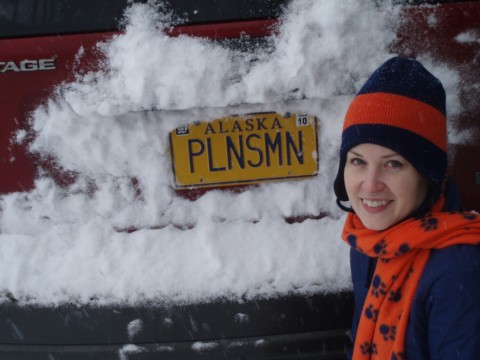 I’ll let Ben, he of the Cannonball Rull tip, set the stage:

This is a pic of my wife (Martha Sherrill ’06) when we were living in Alaska.  I met her in Kansas, dragged her back to the Plains, and made her an honest woman and a Dye Hard (she still refers to the 80s as when Uncle Pat coached).  She then took me to Alaska.  This pic was taken last year in front of our cabin outside Fairbanks, which is 150 miles south of the Arctic Circle.  Yes, it gets cold there.  We had about two solid weeks of -50 and three hours of daylight, which was usually overcast.  I taught in the English Dept at UAF, and there was another lecturer in the department who did her undergrad at Auburn in the 80s.  My wife worked on Fort Wainwright and met a lot of army wives from the south.  There were a lot of LSU grads and even a former cheerleader at Florida, but no Bamers.  God truly does love Alaska.

War Eagle to the Future, too.

Did you see something AUsome? Weird? Today? Whenever? Take a picture of it?
Send it to us at [email protected]