TWILIGHT, Zone (TWER)– Earlier today, Tommy Tuberville flew over the radar-screen cotton fields of West Texas en route to a new job and a new life in Lubbock, just like I did 16 months ago, a teary-eyed decision that cost me a press pass to SEC Media Days, inspired blog posts titled “Loveliest Village of the Llano Estacado” and the original “I Believe in Auburn… and Lubbock”… and which has apparently opened between the two cities what can only be described as a football program worm hole.

I first noticed it right after I accepted my new newspaper job; ESPN’s Mark Schlabach predicted Texas Tech to meet Auburn in the Sugar Bowl.

Then, after spotting my Auburn hat, the guy at the state fair of liquor they call The Strip, goes “Hey man, how ‘bout Chris Todd.”

I had forgotten: Chris Todd – former Red Raider. And they still loved him out there. Give him time, they said. He’s good.

But from 1,000 miles away, Todd looked like the guy who should have lost the starting quarterback job to the guy who was busy leading Texas Tech to their best season ever.

Todd looked like the guy who was leading Auburn to – of course – it’s worst season in a decade, a season that ended with (I couldn’t work for the rest of the day) Tommy Tuberville out of a job.

The wind whipped into the cell phone.

“Dad!” I yelled. “Have you heard? I know, I know… and Leach of all people is supposed to be on the short list!”

Ah yes… when that little rumor got goin’ — Mike Leach as a possible candidate to replace Tuberville — I started getting freaked out. I paced the newsroom, looking at my hands to see if they glowed, breathing on plants to see if they would wilt, and eavesdropping on the sports desk for updates.

But it wasn’t until today – upon news that Tommy Tuberville is set to replace Mike Leach (the Mike Leach I text-messaged almost exactly a year ago for a quote about whether God cared about football) as the head coach of the Texas Tech Red Raiders – that I truly asked myself “My God… what have I done?”

How long Tuberville will be in “the Hub City” is anyone’s guess. I stayed less than a year, because like he told Lubbock sports radio last week, “I’ve spent some time out there and it’s not, you know, it’s not for everybody.”

Personally, I think the line he laid on me last year at the Saugahatchee Country Club was a little more insightful.

It was a week before I left and my third year in a row to see him speak to the Opelika Kiwanis Club.

He started off with a joke and a gripe.

“Well, I’m the fighting coach now, at least according to the Opelika paper.” 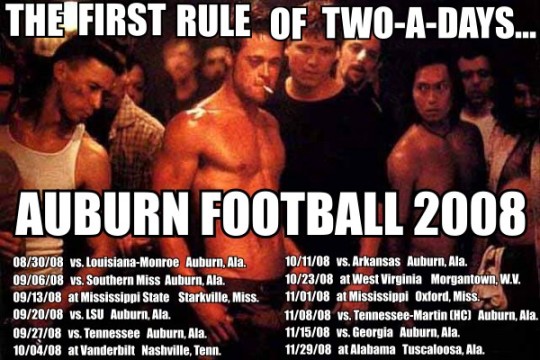 We all laughed. It was a time of innocence. And there was a six game winning streak on. And other than the two-a-days fight club, which he seemed all about (“It’s good to see a foul mood in practice, and we’ve got some guys that are down right mean”), 2008 wasn’t 2008 yet. Hopes were still high. Tony Franklin was still getting high on Amy Winehouse and Tony Robbins in the Athletic complex. Chris Slaughter, he said, “will be a household name.” Vanderbilt was still vanquished. “Bama’s back” was still a punch line.

But by the end, no one had set up the joke. No one had asked the question. Not just that – no one had asked anything about the Tide.  Six wins is six wins, but the fires, I thought, must still be stoked.

“OK, let’s see,” he said, looking around the room. “One more question…”

My heart started beating. It was moving my shirt. I raised my hand. I did my duty.

“Coach, I was wondering if you’d picked up the latest issue of Forbes Magazine.”

There were a few snickers but not the guffaws I was hoping for.

Maybe it was too soon. It hadn’t even hit the stands at Hastings yet (cause yeah, I was going to have it autographed and up on eBay by the end of the day)… but surely, surely, surely he had heard…

Oh God. You could hear the ice melting. My dad hung his head. Apparently he hadn’t heard… or maybe he was just being…

“Yessir, it has, uh, Nick Saban on the cover, claims him as the most powerful coach in all of sports…”

Tuberville looked down. He made a face. He looked up. He flashed the smile.

“Doesn’t the Opelika paper put that thing out?”

I went up to him after things settled down. I wanted a picture to remember him by.  We lined up against the wall. We put our arms around each other.

“Sorry about that, Coach. Didn’t mean to put you on the spot like that.”

“I just wanted to tell you War Eagle. This might be my last time in Auburn for a while. I’m moving in a few days.”

“Lubbock?” he said. “I went to Lubbock once. Looked like the surface of the moon.”

Ah… me, Dad, Susan taking the photo, Coach – we all laughed. Good times.

It was the last time I saw him in person.

Sure – gone for more than a year now have been the chances for cameo pop-ins during my pre-Iron Bowl coffee grabbing with Housel (“Rammer Jammer, Coach. And I’d like you to meet Jeremy Henderson…”).

But since returning to the Plains in August, there was still the fluttering you-never-know potential of seeing him in the rear view or of “War Eagles” in the checkout line. He was still here. He still rubbed elbows. He still lived around the corner from Dad.

Until today. Until Texas Tech. Until Lubbock – the dark, treeless, brisket-eating, queso-dipping, dust storm side of the moon.

Catch you on the flip side, Coach. Guns Up. And War Eagle.

(And if Schlabach predicts us to meet in a bowl next year, I might have to kill myself – for the freaking sake of humanity.)

Photo by the great Susan Melton, Class of Awesome.